A bone marrow dish at Bangkok's 100 Mahaseth. Chef Chalee Kader likes to boast that “everything in my restaurant is local except the Ikea knives.” (Courtesy of 100 Mahaseth)
JOHN KRICH, Contributing writerOctober 18, 2019 11:05 JST | Thailand
CopyCopied

BANGKOK -- Thailand's top chefs, including a growing number presiding over Michelin-starred kitchens, are leading an upsurge in interest in artisanal food suppliers. But behind the country's thriving farm-to-table revolution are hundreds of local entrepreneurs, including a former engineer who built an organic coffee plantation with his own hands and a retired United Nations diplomat producing Thai wagyu beef.

Within just a few years, local wagyu, Thai camembert, truffled brie and burrata cheeses and even Thai caviar have begun supplementing the country's export crops of bananas and rice. Meanwhile, a literal "grass roots" movement has introduced new flavors, organic methods and principles along with higher profits for small-scale producers.

Joe Sloane, the British founder of Bangkok-based Sloane's, an acclaimed producer of high-quality, humanely raised meats, said growth of his business was initially slow. "In the beginning, pork was just pork, and no one wanted to change their operations," he said. "But in the past six years, everything has changed, and now breeders are the ones coming to learn from me."

"Until recently people didn't trust or see luxury in Thai products, only imports," said Billy Marinelli, the American owner of Bangkok's The Oyster Bar, which specializes in fresh seafood. "But local is hip now -- making Thailand a culinary destination not just for street food, and in a way that places like Hong Kong or Singapore could never match."

Some credit for this change of approach belongs to chefs such as Chalee Kader at 100 Mahaseth in Bangkok, which specializes in "nose-to-tail" meat dishes inspired by the love of offal, bone marrow and bile in the Isaan region in northeastern Thailand. 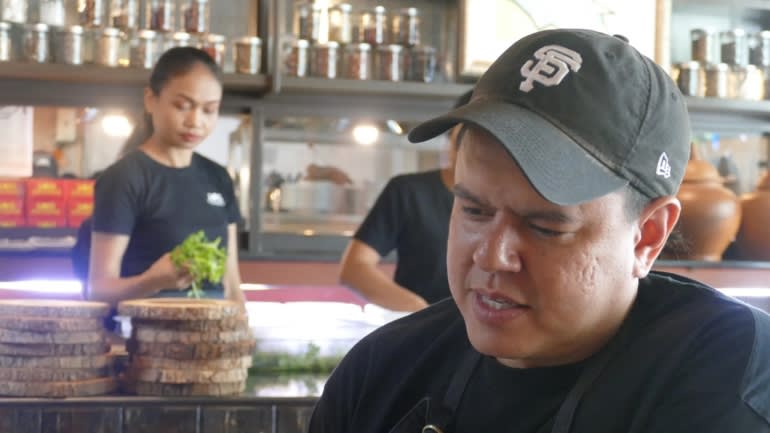 Chalee, who likes to boast that "everything in my restaurant is local except the Ikea knives," said he is doing his bit "to give these long-ignored ingredients the full importance they deserve."

Weerawat "Num" Trivasenawat, chef at Samuay & Sons restaurant in the northeastern city of Udon Thani, said that "giving pride to a local culture so undervalued has become my life's work." And transplanted Bangkokian Kongwuth "Kong" Chaiwongkachon said he created his restaurant, Locus Native Food Lab, in Chiang Rai, to "preserve, protect and elevate" the food roots of Thailand's far north. Many chefs source local and organic products through food "finders" such as Sangutala Vijit, who gave up her job as a schoolteacher to build a network of farmers throughout the country to provide more than 100 food items such as wild chestnuts and almonds, red okra, sweet dates and edible flowers for restaurants.

"Changing the world through local products is my passion," said Sangutala. Beginning with an association with the award-winning Paste restaurant in Bangkok, she has come to count on chefs to "visit my farmers to boost their pride" adding that they "don't bargain over prices because they know that paying well protects the land."

Some of the producers behind this surge in local and organic products have made dramatic lifestyle changes to achieve their agricultural ambitions. Supagin Khamsamut gave up a career in engineering to build a farm producing organic Arabica coffee outside Chiang Rai. "I saw how much cancer there was in this area, and how fish in local ponds were dying," said Supagin, explaining his commitment to the organic movement.

In a surprising transition, Arun Sala-Ngarm followed an international career that culminated in Azerbaijan, where he represented a United Nations agency, by founding a wagyu beef farm in his native Nakhon Ratchasima, widely known as Korat. Arun said he built his operation to prove that "we can produce something just as excellent as in Japan, but in warm weather."

Arun disdains hormones or chemical elements in cattle feed, and uses local rice husks that enable him to call his product "Jasmine Wagyu" and helps chefs to stand behind what they serve. "This way I know the exact cow that goes on my plate," said Chalee.

Equally traceable are the niche cheeses made by Reinhard Matheis, an Austrian whose Heaven on Cheese operation began as a hobby when he retired to Thailand after 20 years in food-related positions on cruise ships. "I was kind of missing cheese and began making some soft cheeses from milk bought at supermarkets," Matheis said, adding that he had been "overwhelmed" by the growth in demand. He added that careful supervision is crucial. "Just because a product is made locally, it still has to be unique and top quality."

The rarest gourmet finds for chefs committed to the local path may be in following another global trend -- foraging for wild forest products. To that end, chefs like Kongwuth and Phanuphon "Black" Bulsawan, of Blackitch Artisan Kitchen in Chiang Mai, have enlisted Karen hill tribes to lead them to edible plants and help monitor the effects of climate change on wild honey and other foods.

For some chefs, the usual morning shopping ritual at urban markets is being supplemented by far-flung "jungle markets" like the Talad Hua Dua outside Udon Thani, where Weerawat hunts for native porcini-style mushrooms, baby tamarind, river prawns and "elephant's ear" leaves in "small, homegrown amounts." Top: Offerings from Heaven on Cheese. Bottom: Wild ginger on display at a "jungle market" near the northeastern city of Udon Thani. (Top photo courtesy of Heaven on Cheese, bottom photo by John Krich)

Beyond this, the zeal for promoting the so-called Thai "terroir" is inspiring a number of noted chefs to follow in the footsteps of Briton James Noble and his "zero-carbon" restaurant-farm The Boutique Farmers, in Pranburi, near Hua Hin, by moving to rural areas where their kitchens sit beside adjoining fields. In Noble's case, an exotic, organic market garden supplying some of Bangkok's top restaurants has become a mainstay business.

Ironically, as localism extends to remote areas, the most indigenous ingredients are still the least known. "In four years, I think I've only learned about 5% of what we have in this country," said Napol "Joe" Jantraget, chef at Bangkok's 80/20 restaurant -- named for its minimum ratio of local to imported ingredients. Cheesemaker Matheis added: "Other countries have great artisans too, but within Asia, Thailand's diversity of gourmet food must top the list." 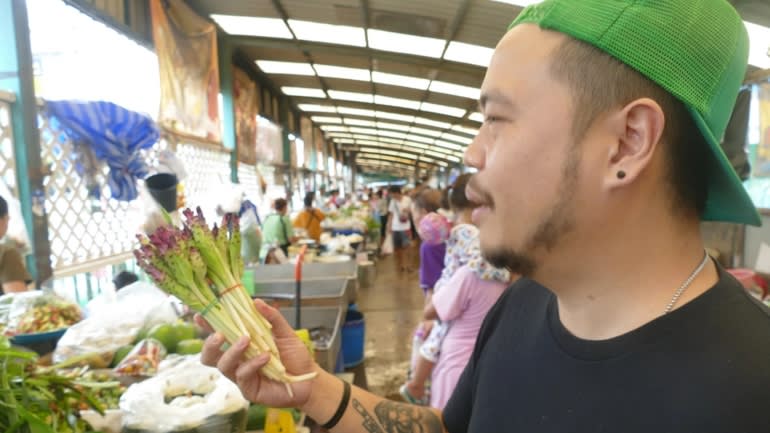 Not everything in the garden is rosy. Cattle breeder Natthaphon Klangwichai, who runs a farm close to the Mekong River in Sri Chiang Mai, said that perfecting a wagyu breed for Thailand had earned him four or five times the prices paid for ordinary beef. But he withdrew his meat from chains of Japanese restaurants because "they were claiming it came from Japan, so I prefer to work with chefs who properly credit their local source." 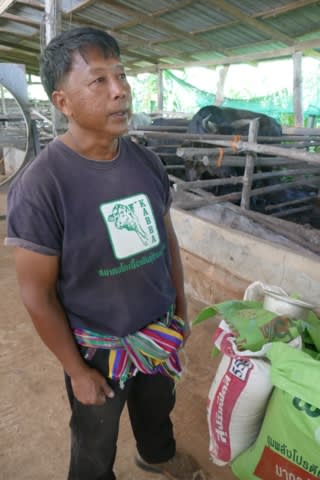 Bryan Hugill, a South African and co-founder of Raitong Organics Farm in northeastern Thailand with his wife, Lalana Srikram, heads a collective of some 100 growers committed to meeting stringent European and Canadian organic certification standards. He said there had been a "sea change" in attitudes to local and organic food since they began operations in 2007.

But Hugill, who has a partnership with Bangkok's environmental-minded Bo.Lan restaurant, also cast doubt on the organic credentials of Thai-certified ingredients. "Like any new industry, organics here are a bit of a Wild West," he said. "Some have government certification, but still, Thai standards mean little beyond Thailand."

Despite these issues, however, the local and organic food boom in Thailand looks set to reap the fruits of rapidly rising consumer demand. "It's lucky we've got such adventurous consumers," said Chalee. "That's why we have taken such a big step up, and why it's going to continue."