Love affair with Japanese culture intensifies amid thirst for authenticity 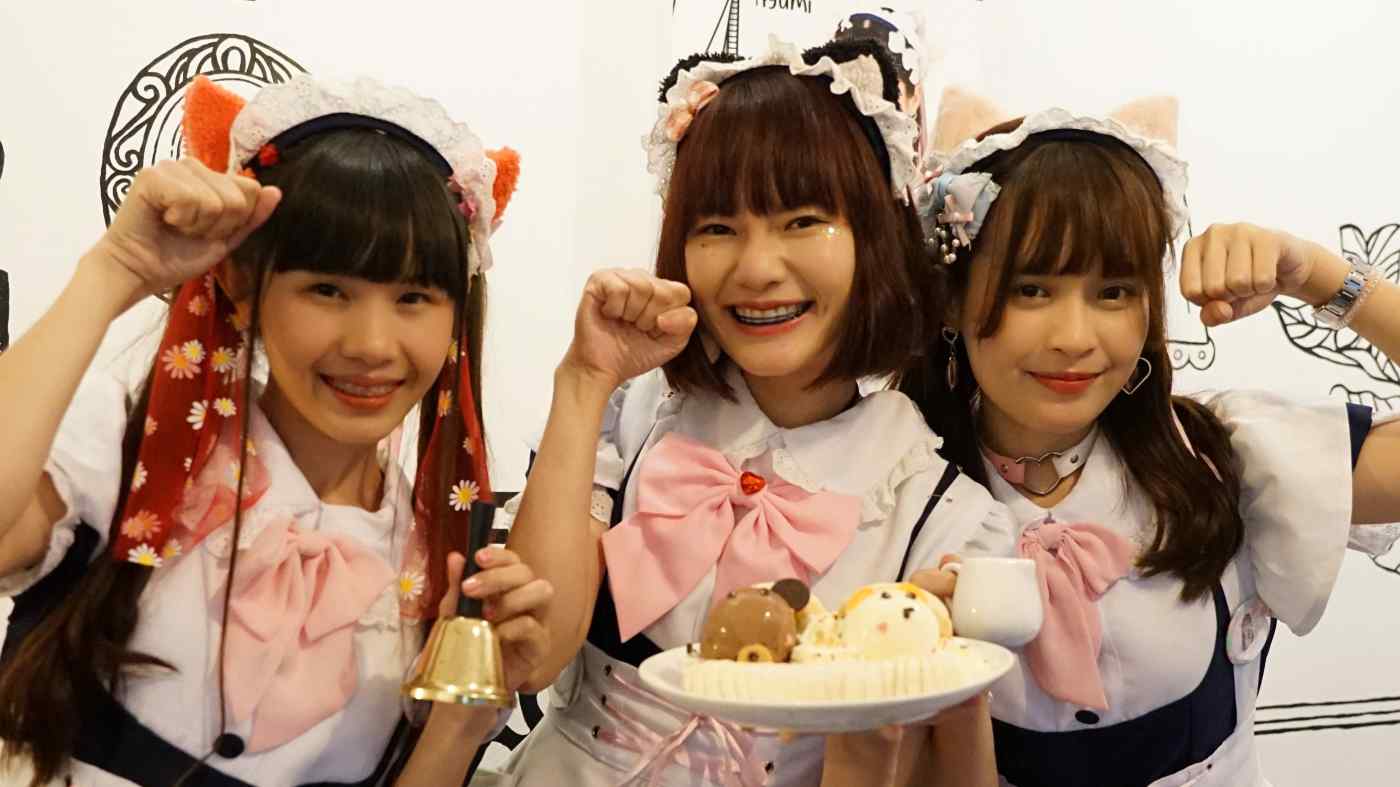 BANGKOK -- When Bangkok's iconic Japanese department store Isetan closed its doors in late August, some observers were puzzled. Thais have a well-known passion for Japan, so why didn't Isetan's business go well?

The answer is simple: Thailand's honeymoon with all things Japanese has moved on to a new stage. From a rustic hot spring ryokan (Japanese-style inn) to sushi omakase (chef's choice) restaurants headed by a Thai chef, Japanese culture in Thailand is becoming more authentic and accessible. The days when Japan could only be consumed in a department store are long gone. Thai consumers seem to know and love Japan more than ever.

Nestled in the lush mountains of Chiang Mai, in northern Thailand, is Onsen @ Moncham, a compound of elegant Japanese-style gabled villas that look like an imperial villa in Kyoto. Here, guests spend their days dipping in the natural hot spring baths and strolling around dressed in yukata, the lightweight summer kimono, just as they would in an onsen (hot spring) ryokan in Japan.

"We have a unique opportunity that appeals to the style and culture that people want to find in Japan -- but for much less cost," Michael Howard, the property's managing director, told Nikkei Asia. "We don't want to be, and we will never be, able to be Japan, but if we can make things comfortable and close, and affordable in time and money, why not?"

Following the Japanese government's decision to grant Thais a tourism visa waiver in 2013, Japan quickly became the top holiday destination for Thais. But while Tokyo is a mere six-hour flight from Bangkok and budget carriers have helped to reduce traveling costs, Thais tend to travel with their families and it is not always easy for them to take everyone abroad, Howard said. 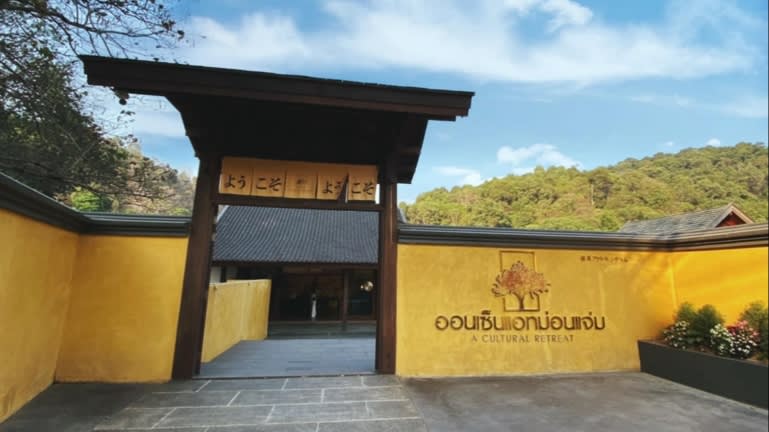 Onsen @ Moncham, a Japanese-style onsen inn situated in the mountains of northern Thailand, has the look of an imperial villa in Kyoto. (Courtesy of Onsen @ Moncham)

Onsen @ Moncham started as a private onsen residence for its two Thai owners, who were visiting Japan three or four times a year but wanted somewhere closer to home for friends and family members, or to use as a quick getaway from city life. Howard, who was running his own hotel business, saw that the concept could attract a larger audience and suggested transforming the project into a hotel. With total investment of more than 200 million baht ($6.3 million), the 16-room resort was opened in 2018.

An American who has lived in Thailand for 17 years, Howard said the opening made him realize how much Thais appreciate authentic Japanese culture. For example, guests are required to undress completely when they bathe -- unlike at public hot springs in Thailand, where it is more usual to bathe clothed. The management provides bathing underwear for women, but few have opted to use it, he noted.

"Despite their conservative nature, [Thais] are appreciating this culture to remove their clothes, remove their stress and worries of the day -- and everything that clothes mean -- wash themselves, and enjoy the onsen," he said. The hotel's occupancy rate in 2019 was around 75%, relatively high for the competitive hotel sector. 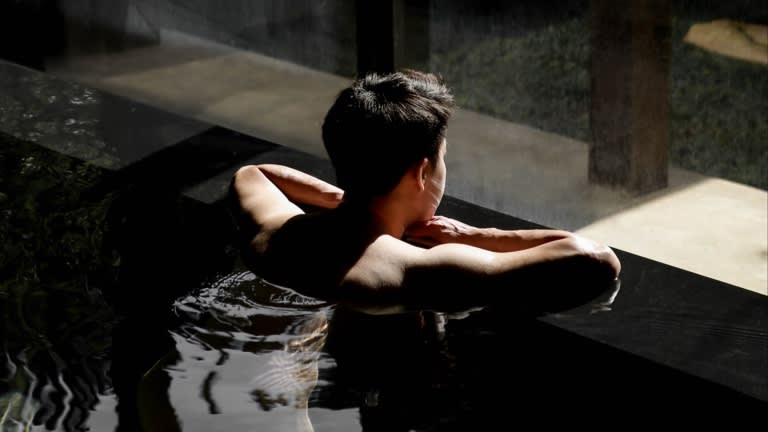 And then came COVID-19. "That was when we realized that we really had a gem," said Howard. While the absence of foreign tourists shattered many industry peers, Onsen @ Moncham saw occupancy rise to 85% to 95%. The Japanese edge was drawing Thais who had no choice but to travel domestically. "So we have been reinvesting and putting in a Japanese garden and trying to be a bit more interesting and authentic," Howard said.

The hotel's cafe and whiskey bar are also being renovated to create an izakaya (informal Japanese restaurant that serves alcoholic drinks and snacks) and a sake bar, respectively. New rooms equipped with futon bed mattresses will be ready by mid-2021, and a camping service is to launch by the end of the year, reproducing a service that Howard saw on a study trip to Japan. Guests will be able to stay in a luxury camp trailer parked in the Japanese garden, sleep on futons and sit on the floor to dine.

Japanese culture seems omnipresent in Bangkok, where you can even find a genuine "maid cafe" -- a restaurant where waitresses dressed in anime-like maid costumes treat customers as "masters" or "princesses." Maidreamin, a maid cafe chain headquartered in Tokyo's Akihabara district, chose Bangkok as its first location abroad when it opened a branch in 2013. Thai maids were trained to do Japanese dance performances and to offer "tender" and "compassionate" hospitality, as in Japan. Many go by Japanese girls' names, which they pick for themselves. Ayumi, a maid at Maidreamin, casts a magic spell on her "master's" dessert plate to make it more tasty. (Photo by Yukako Ono)

Initially, maid cafes were perceived as a service primarily aimed at otaku men (people obsessed with particular aspects of pop culture). As in Japan, that perception is changing, however. "The young generation as well as women are increasingly coming to us as a place with activities for both themselves and their children," said Yoshinobu Ueda, Maidreamin Thailand's country director. "What used to be seen as a temporary boom is now evolving into our customers' hobbies and habits."

Japan's cultural influence became rooted in Thai lives in the 1970s, when Japanese TV series such as "Ikkyu-san," a comedy anime production featuring a young monk, were launched. "Being Asian, we had similar life patterns and religions to Japan, so it was not hard to relate ourselves to what was depicted in the stories," said Kitti Prasirtsuk, an associate professor in international relations at Bangkok's Thammasat University.

He recalled that even during an anti-Japanese period in the 1970s, when Thailand's trade deficit with Japan prompted public criticism, children continued to watch Japanese TV shows. "Japan was a forerunner in Asia's middle-class consumption, and there was not much alternative," he said. Shoppers pose with statues of sumo wrestlers on a Japanese-themed floor of a shopping mall in central Bangkok.   © AP

The key advantage for Japanese culture in Thailand, according to Kitti, is the strong economic relationship between the two countries. In the 1980s, many Japanese manufacturers suffering from the high value of the yen relocated production to Thailand's eastern seaboard. Many have invested heavily since, and Japan has played a significant role in developing the area into one of the largest industrial hubs in Southeast Asia.

"China and South Korea also have a strong influence on Thailand, but in terms of soft power they cannot be like Japan," Kitti said. "K-pop has been popular for some time but I think the trend will peak soon as [South] Korea does not have a big economic presence here. They invest more in Vietnam. China meanwhile has the economic ties and is trying to promote their pop culture, but their entertainment industry is not mature enough yet."

The Japanese expat community in Thailand has grown in line with the country's economic presence. With 55,081 Japanese residents in 2018, Bangkok's Japanese population was the largest in Asia and the second-largest globally, beaten only by Los Angeles. This huge community is drawing more Japanese restaurants and entertainment into the country, Kitti said. A man walks in front of advertisements for Japanese restaurants in Bangkok.

Indeed, Thailand has become one of the largest Japanese food markets outside Japan. Sushi can be found at street food stalls for as little as 5 baht, while shabu shabu (sliced meat and vegetables hot pots) and yakiniku (grilled meat) restaurants have become a must for new shopping malls.

There were 3,658 Japanese restaurants in Thailand in 2019 -- a 3.5-fold increase over the decade since 2009, according to an annual survey by the Japan External Trade Organization. While many serve localized Japanese cuisine, with a spicy Thai twist or a fancy photogenic touch, some are striving to make Thai-made food more authentically Japanese.

The founders, who had fallen in love with sushi in Japan, wanted a spot to eat out in Bangkok. But fish varieties that were suitable for sushi in Thailand were limited back then to common ones like tuna and salmon, and quality was not always high. "We wanted new ingredients, like the kohada white fish or fresh good quality saba (mackerel) and squid, so we decided to source on our own," co-owner Natt Pongtanakorn told Nikkei Asia. "We also wanted to be more affordable by controlling costs. At that time, a full meal of authentic sushi could easily cost you 10,000 baht."

Omakase courses served at Umi's two branches cost between 2,900 baht and 4,800 baht. The menu is created by chef Banphot Boonklom, a 20-year sushi veteran who trained under a Japanese chef in Thailand. Incorporating the edomae (Tokyo) style, the fish imported from Japan is treated with traditional blood-removing techniques and is aged to produce the best possible umami (savory taste).

"We don't do fancy sushi," Natt said, referring to the omakase buzz around Thailand's sushi scene, which has produced more than a dozen restaurant openings in the past year. "We don't do nitrogen smoke or tower up uni (sea urchins) and ikura (salmon roe) to make them look gorgeous. Even if Instagrammers may prefer them, that's not the sushi that I myself would want to eat." 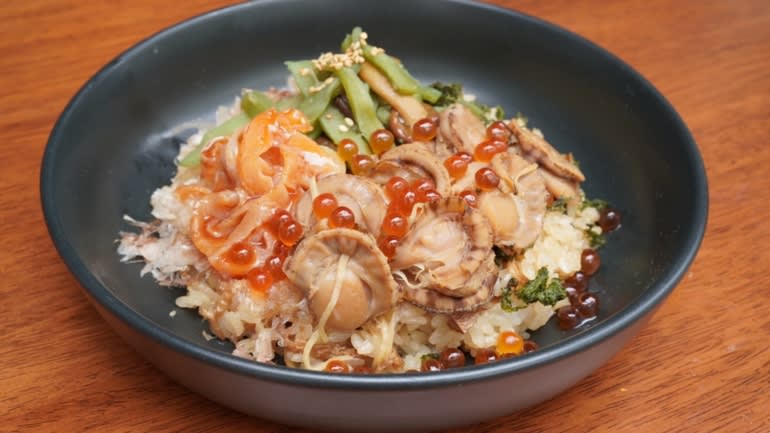 Co-owner Tosapol Chaichanavichakit added: "We are more like a comfort food than occasional food. Sushi has become part of many Thais' diet. We welcome walk-in customers and single customers who just want to sit at the counter and have good sushi at the end of their day." 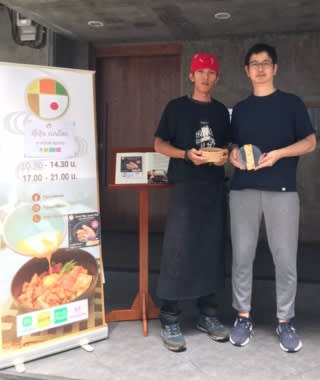 Yet, keeping the balance between localization and authenticity is a challenge, especially at a time when traveling is not easy. "It is great to see Japanese culture localize in Thailand, but at the same time, we need to keep presenting the real and yet unknown features of Japan," said Takahito Katsuta, chief executive of Vertex Asia, which promotes Japanese tourism, food and pop culture in Thailand.

"I hope people will be interested in the places where the ingredients come from and would want to visit them when traveling resumes," said Katsuta. The company is planning to expand its bento business to Malaysia from October and then to other Southeast Asian countries where Japanese culture is not (yet) as big or as authentic as in Thailand.