Walk ancient samurai roads and travel back in time Tsumago is the first post town to be designated a historical preservation district for its architecture. (Photo by Hideyuki Miura)
Nikkei staff writersNovember 9, 2019 11:00 JST | Japan
CopyCopied

TOKYO -- Many visitors to Japan hunger for a glimpse of the country as it was before modernity washed over it in the mid-19th century.

Amid the neon and concrete of Tokyo or Osaka, it can be hard to imagine that there is anything left of old Japan, outside of Kyoto. But traces can be found in well-preserved post towns -- places whose rows of wooden houses and whitewashed sake storehouses evoke a bygone age.

Post towns offered lodgings for samurai and other travelers heading to and from cities such as Edo (modern-day Tokyo) and Kyoto.

In the Edo period, (1603-1867), two routes, the Tokaido and the Nakasendo, linked Edo with Kyoto. It is said that traffic along the coastal Tokaido was four times greater than on the Nakasendo, the inland route. But very little remains of the old Tokaido, which ran roughly along today's heavily urbanized corridor between Tokyo and Osaka. But the Nakasendo, which passes through mountainous areas, is sparsely populated. Many of the old houses along the road remain intact.

For those wanting to step back in time to the Edo period, here are 10 of the best places to do so.

The residents of this post town on the Nakasendo began preservation work ahead of other post towns. In 1976, Tsumago became the first post town to be designated by the government as a historical preservation district for its traditional architecture.

Houses that have stood since the Edo period can be seen along the road. In autumn clouds hang low over the district, adding to the mystique of the scenery. Tsumago is located on the Kisoji, a section of the Nakasendo that runs deep in the mountains.

The town has a number of notable buildings, including the Waki-honjin Okuya, a government-designated important cultural property that served as an inn for traveling feudal lords in the Edo period. Ouchi flourished as a station on the Shimotsuke Kaido -- also called the Aizu-Nishi Kaido -- a road linking a castle town in present-day Aizu-Wakamatsu with Nikko. In a basin surrounded by mountains, 47 thatched-roof houses stand in neat rows along a wide street with water channels on either side. People still live in these homes, many of which double as stores. The town attracts about 800,000 tourists annually. Magome is located on the Kisoji, a mountainous stretch of the Nakasendo road. (Photo by Hideyuki Miura)

Magome, another post town on the Nakasendo, is the birthplace of Toson Shimazaki, a famous poet and novelist. "Kisoji is all in the mountains," writes Shimazaki to open his novel "Yoakemae" (Before the Dawn). The Toson Memorial Museum, which commemorates the writer's work, stands among the houses that huddle along the sloping road. Walking the 9 km from Magome to Tsumago along the Kisoji mountain path lets the traveler experience the opening lines of the novel. The sound of water flowing down the channels on either side of the road is pleasant. 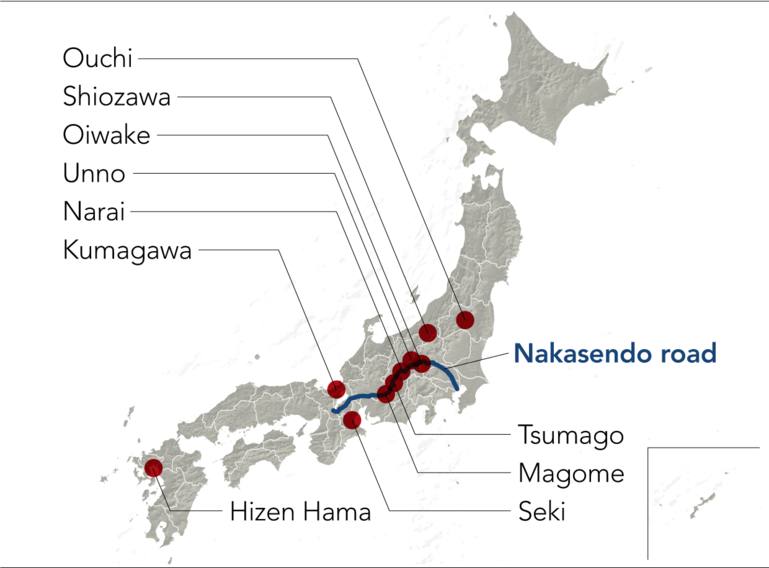 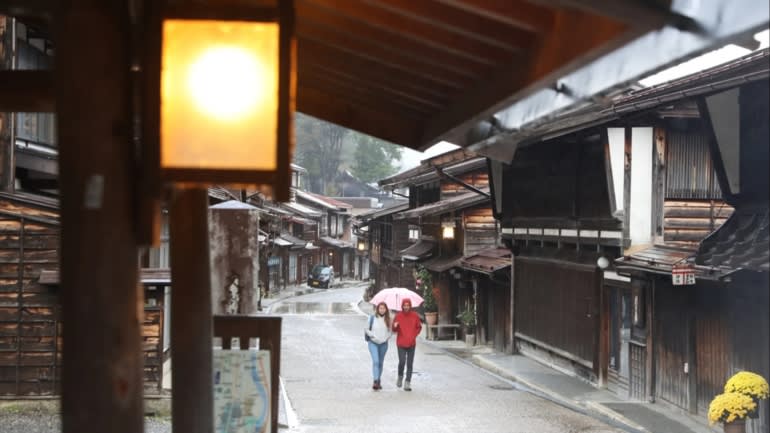 Narai is situated at the midpoint of the Nakasendo. This flourishing station on the Kisoji section of the old highway was called "Narai Senken," or the "thousand inns at Narai." Seki was the 47th of the 53 stations on the old Tokaido coastal highway. Seki is the only one on the Tokaido that was rated among the 10 most attractive post towns. More than 200 old houses remain along the road, extending about 1.8 km from east to west. 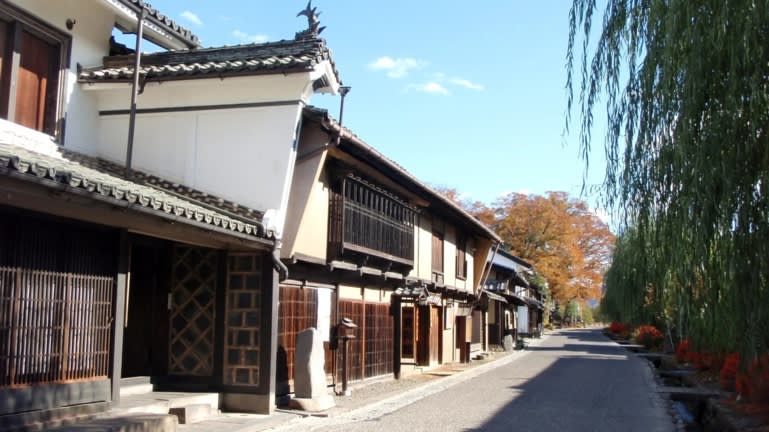 Unno is a post town on the Hokkoku Kaido, a highway that links the Nakasendo and the Hokurikudo, a highway along the Sea of Japan coast. It prospered as a way station for pilgrims traveling to Zenkoji Temple in Nagano. (Photo courtesy of the town of Karuizawa)

This post town is located where the Hokkoku Kaido highway to Niigata branches off from the Nakasendo. In Oiwake, the former Aburaya inn houses dealers of secondhand books and antiques. 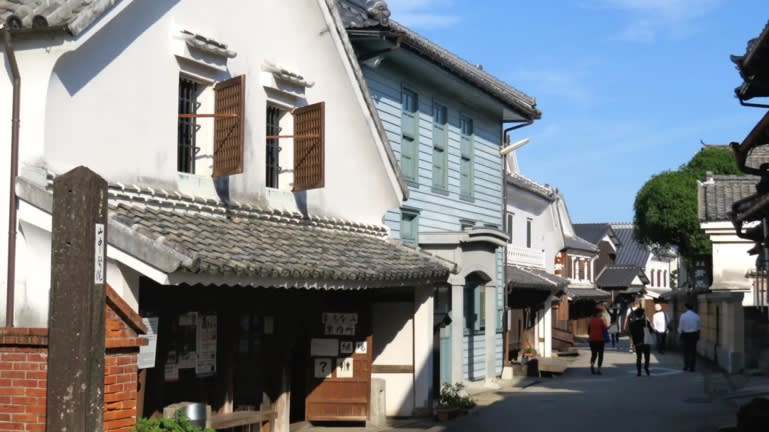 Hizen Hama is on the Tara Kaido highway, which branches off from the Nagasaki Kaido. The post town flourished, thanks mainly to its sake and soy sauce breweries. The whitewashed walls of the buildings along Sakagura Dori, or "sake brewery street," are beautiful. Shiozawa prospered as a post town on the Mikuni Kaido highway, which connects Takasaki on the Nakasendo with Niigata. It is known for its textiles and premium rice. (Photo courtesy of the town of Wakasa)

The Wakasa Kaido highway was used to transport fish to Kyoto, including mackerel caught in Wakasa Bay, earning it the nickname Saba Kaido, or mackerel road. At Kumagawa, a post town on the highway, the magistrate's office, a guard station and a warehouse from the Edo period remain.