NUNDLE, Australia -- Mount Misery is not a name to inspire confidence in a budding treasure hunter. But 160 years ago, European and Chinese prospectors dragged thousands of grams of alluvial gold from the area, and with the international gold price soaring above $2,000 a troy ounce (31.1 grams) in recent weeks, who's to say that I can't make my fortune here too?

I have followed one of Australia's many "gold trails" to Nundle, a quiet village at the foot of the Great Dividing Range, about 400 km northwest of Sydney in the state of New South Wales. Armed with a shallow dish and fossicking tools, I am about to pan for gold in one of the mountain-fed streams that flow through the area. It could be a fool's mission -- or it could make me wealthy beyond my dreams. Therein lies the lure of fossicking.

My host Warren Tremain, of the Mount Misery Gold Mine Museum, takes my money for the museum tour, sells me a coffee and then rents me the essential gold fossickers' kit for 20 Australian dollars ($14.35) -- thus confirming the iron law of the gold fields: The only people guaranteed to make money from a gold rush are those who sell the tools, food, clothing, shelter and services. But I'm already in, mesmerized by the sight of the museum's replica 80-ounce gold nugget found here in the early 1850s. One like that would be worth a cool US$160,000 at $2,000 an ounce.

My host tells me that Nundle's Mount Misery was originally known as Mount Pleasant. But this can be a hard country, and after a winter of rain, wind, sleet, snow and frustrated digging and sluicing in 1852, local prospectors decided that a name change was in order. Still, enough fortunes were made in Nundle over the ensuing years for it to become a thriving town, drawing prospectors from as far as California, the U.K. and southern China before stories of richer fields in other parts of NSW, and in what are now the states of Victoria, Queensland and Western Australia, enticed them away. 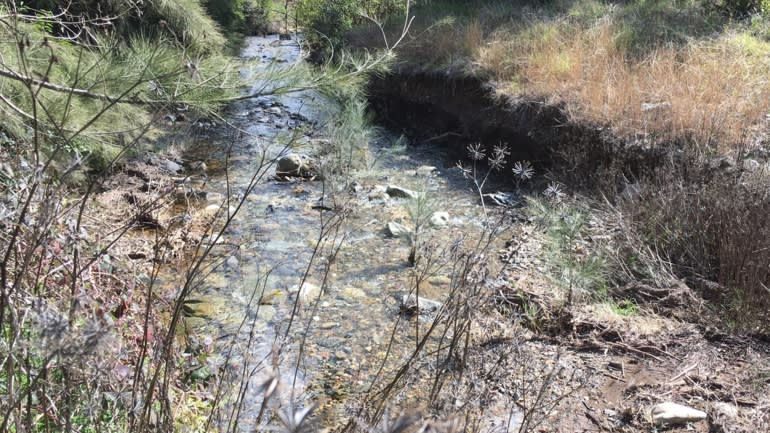 Top: Oakenville Creek, which runs through the village of Nundle, makes an ideal location for gold panning. Middle, Bottom: Replica gold nuggets and bricks are displayed at the Mount Misery Gold Mine Museum in Nundle. (Geoff Hiscock)

In 1892, a correspondent for the Australian Town and Country Journal noted that in 1853 "there must have been fully 3,000 people, probably more, at these diggings." The lucky ones were sending gold dust and nuggets back to banks in Sydney and Melbourne. According to the NSW Department of Industry, an estimated 10 tons of alluvial and reef gold has been taken from the Nundle area and the nearby diggings at Hanging Rock since the early 1850s. At $2,000 an ounce that would equate to $650 million.

Gold fever has always lured prospectors to Australia. Chinese immigrants, who knew it as "New Gold Mountain" (San Francisco being "Old Gold Mountain"), made up more than 3% of Australia's population by 1861. Most returned to China, but those who stayed set up the clan-based remittance shops and general stores of rural Australia, creating an infrastructure that would support future waves of Chinese immigrants.

Today, Australia has the world's largest economically viable gold resources, and some of the world's biggest mines, such as Boddington and Fimiston (also known as the Kalgoorlie Super Pit), where annual output runs into the millions of grams. It is also on track to displace China as the world's biggest gold exporter in 2021. The Australian government's latest gold production forecast for the fiscal year to June 30, 2021, is 381 tons, with exports likely to reach AU$32 billion in value. Top: The massive Kalgoorlie Super Pit, known as the Fimiston mine, remains one of Australia's largest gold producers. Bottom: A replica 80-ounce gold nugget on display at the Mount Misery Gold Mine Museum. (Geoff Hiscock)

However, gold is clearly back in vogue among investors, in part because the economic distress caused by the COVID-19 pandemic has made the future prices of goods and services hard to predict. China and Russia are recent big official buyers, though the U.S. Federal Reserve had the biggest holding, at 8,134 tons, as of July 31. Germany ranked second with 3,367 tons, while China's official reserves stood at 1,948 tons, ranking it sixth behind Italy, France and Russia. While India's central bank is well down the list with about 650 tons, the World Gold Council, a London-based nonprofit association of leading gold producers, thinks Indian households may have up to 25,000 tons of gold stored at home.

The council expects gold demand in 2021 to rise to 3,789 tons. Almost half will likely go to the jewelry trade, which is dominated by India and China, while coins and bars will account for 20% and central bank reserves for 15%. The remainder will be split between exchange-traded funds and commercial use, primarily in the electronics, industrial, dental and medical sectors. The final swirl, but no flashes of gold in this pan. (Geoff Hiscock)

On a sunny winter's day in Nundle, these global machinations and the market price of gold are a world way. I'm here for the thrill of the chase. Tremain points me in the direction of Oakenville Creek, a fast-running steam that should be laden with gold after recent heavy rain, and I'm off on my quest. My namesake Thomas Hiscock helped to spark the Victorian gold rush, finding gold near Ballarat, in Victoria, in 1851. With connections like that, how can I fail? But I know I need to stay away from fool's gold -- rocks and pebbles made up of iron pyrites. When scratched, fool's gold turns black; the real thing stays gold.

I've been studying the literature, so I know the site selection technique -- choose the sediment along the riverbank, rather than the river itself. Dig under boulders and crevices along the banks, among sediment trapped around tree roots, or in sheltered pools near rapids. I find the perfect spot, and it's not long before I'm booted up and chipping away at the rich red soil just above the water line. After I fill most of my pan with sediment, the next step is "puddling" -- breaking up the clay and dirt by rubbing it between my hands. When I shake the dish, the heavier particles sink. Then it's time to swirl the dish again, tilting it to wash away as much of the gravel and dirt as possible.

After I do this several times, I have a small amount of fine black sand left. This is where the gold should be. With just a little water left in the pan, I tilt it backwards, which should leave the heavy specks of gold stranded at the top of the pan. On my first attempt I'm certain I see a flash in the pan. But on closer inspection, a flash is all it is. No gold specks for me. As the Prince of Morocco says in Shakespeare's "Merchant of Venice," "All that glisters is not gold."

That's the way it stays for the rest of the day. But I'll be back. In Australia, the gold rush never ends.