The art of one-ingredient mixology, inspired by sushi

Japanese bar in Taiwan defies trends and opts for simplicity TAIPEI -- Tucked away in a small street near the bustling downtown area of Taipei, Wa-Shu (the name means traditional Japanese alcohol) has been serving up cocktails since 2013, which are renowned in the Taiwan capital's vibrant drinking scene.

Yet, as talented bartenders the world over enthusiastically blend local ingredients, various spirits, spices and herbs in search of undiscovered flavor combinations, the owner of Wa-Shu, Japanese-born Tomoaki Inaba, goes against the grain, in the complete opposite direction -- one-ingredient mixology.

Sitting in Wa-Shu, one immediately notices the simplicity in every corner of the room. The menu consists of two pages of single flavors -- apple, grape, orange, peanut butter, green tea, cedar, black pepper. As Inaba puts it, "Everything is about that one ingredient." To create this menu, Inaba spent countless hours experimenting with different base spirits and wines to find the perfect companion for each flavor.

The bases for blending, marinating and mixing include shochu, sake, Japanese gin and whisky. But, according to the Japanese owner, the base only exists to enhance the notes of the one ingredient chosen, a platform to let the star shine. In keeping with the theme, I ask Inaba a simple question -- why? "A customer comes in and wants to drink something with the flavor of an orange. Most bartenders would mix and shake the orange base with other juices and flavors, eventually drowning out the initially requested flavor. Here, every step we take is meant to deliver that one flavor as clearly as possible, to deliver something that tastes more like an orange than the actual fruit itself."

When Inaba speaks of every step, he means it. No garnishes are used and most drinks, short or tall, are served in one type of wineglass. The music is low, as is the lighting, and the team openly place large plastic containers, bottles and ingredients on the bar in plain view as they mix up batches of flavors. This way, drinkers are not affected by colorful displays, extravagant decor, fancy garnishes or ambiance. The stage is fully given over to the ingredients. 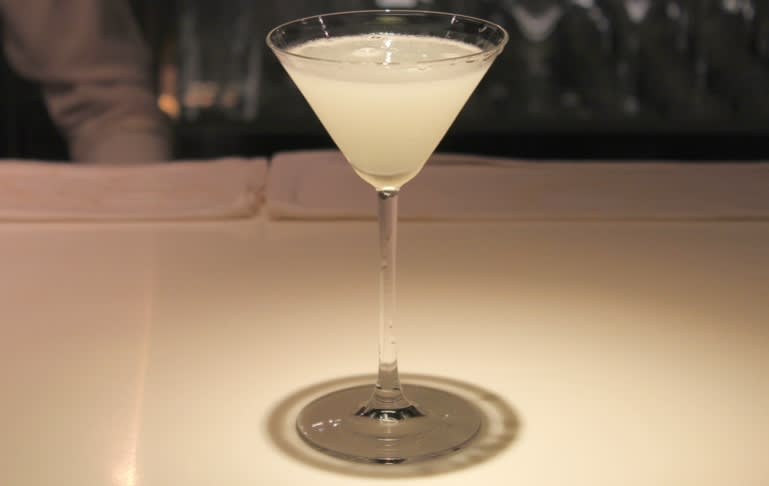 Inaba's colorful history in the drinks industry makes it easier to understand how Wa-Shu came to be. Born in Chiba, Japan, Inaba moved to Tokyo in his early twenties. He started working in bars and restaurants, but as is his personality, he chose bars that specialize in one category. He worked at a premium whisky bar, then Akaoni in Tokyo's Sangenjaya area which offers an unrivalled selection of sake. He worked in shochu, beer, always delving into each category he was faced with. He tells me that by working is such places he could truly study and learn about each drink, as opposed to working in pubs or izakayas with a wide range of offerings. Wa Shu's specialty is cocktails with single ingredients, like this one based on cherry blossoms. (Photo by George Koutsakis)

He then spent almost eight years in the United Kingdom. Several years were spent making whisky on Islay, before he moved to London and began working as a sake sommelier and Japanese drinks specialist. His Taiwanese wife led him to Taipei, where he decided it was time to take all his knowledge in drinks and turn it into something unique. How did the idea surface? Inaba answers with one word -- sushi.

"When you visit a high-end sushi restaurant you choose the seafood that's in season. Tuna, salmon, eel. Each piece of sushi focuses on one type of seafood, one flavor, and delivers it at its freshest and tastiest. You can't tell a sushi chef to add some mackerel on top of the tuna, or mix some ikura with egg. It's all about the single experience of each seasonal ingredient. I wanted to bring that out through mixology."

Wa-Shu is now a hugely popular cocktail bar in Taipei's nightlife scene. Visiting on Friday or Saturday isn't recommended as the small space is usually jam-packed. After the bar's success in Taipei, a second Wa-Shu branch is planned to open in London in autumn 2019, which Inaba will lead after relocating to London with his family. His flagship Taipei branch will be left in the capable hands of Japanese bar manager Takafumi Makita . Inaba's dream after London is to open a branch in New York. In the years to come this minimalist approach to cocktails may be reaching a bar near you, judging by the man's ambition.