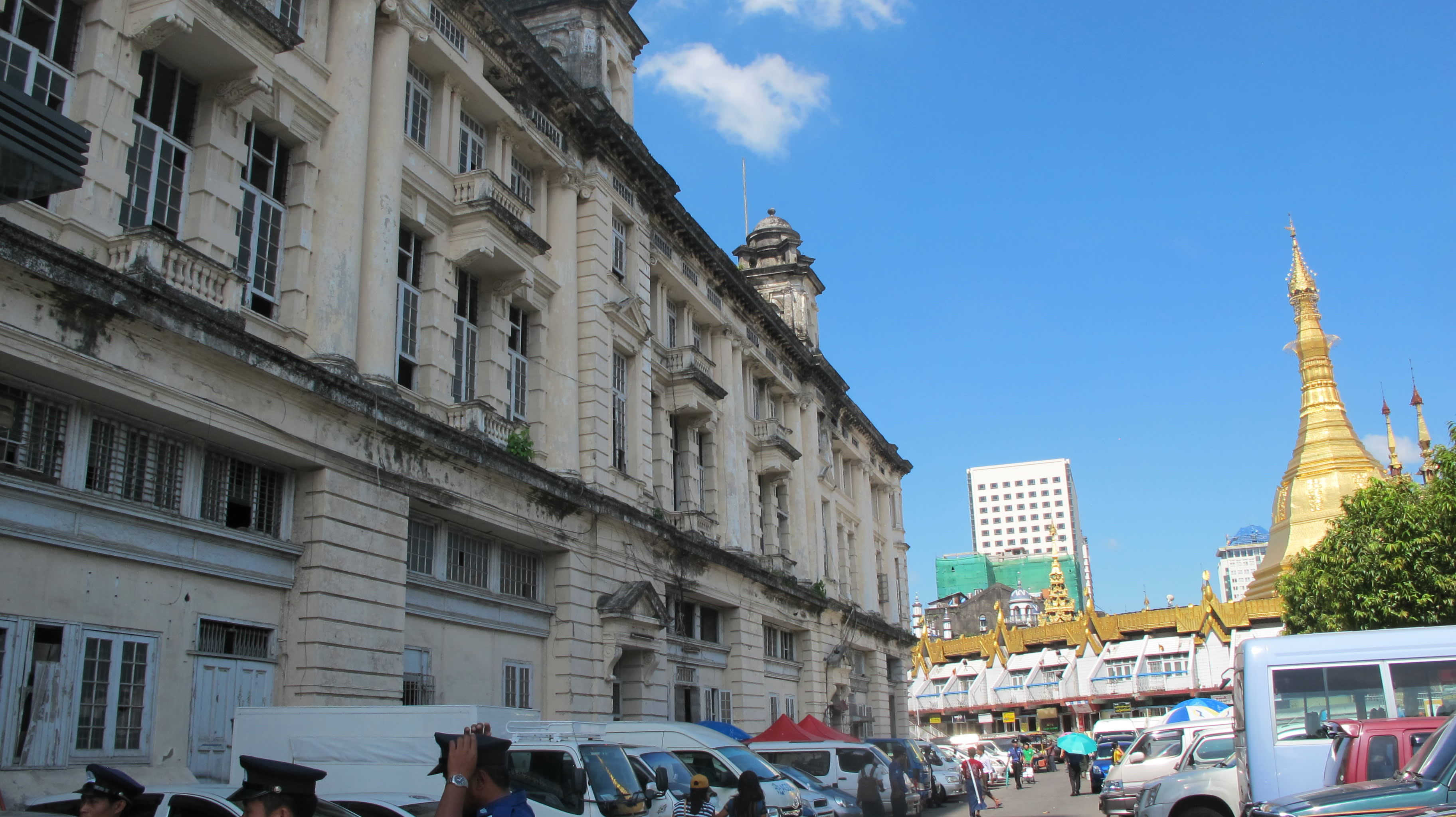 YANGON -- Scott Hostel on 31st Street in downtown Yangon offers arguably one of the best deals in Myanmar these days. Prices at the nine-room establishment range from $10 to $15 a night, with free breakfast, free Wi-Fi, and a bar and rooftop smoking area all on offer in a tastefully renovated, century-old British colonial-style building. Scott Hostel on 31st Street in downtown Yangon, offers arguably one of the best deals in Myanmar. (Photo by Peter Janssen)

"I studied for four years in England where I fell in love with English buildings," said Aung Khant Kyaw, managing director of Haven, the family-owned construction company that renovated and runs Scott Hostel, near the famed Scott Market, more recently known as Bogyoke Aung San Market. "My parents said I was crazy to spend so much time and money on a business like this, but it's not for the money. I want to show people that colonial buildings are lovely and they can't be created overnight," he said.

Repatriate Aung Khant Kyaw, who launched the budget hostel in March, is part of the fledgling pro-heritage movement in Yangon, Myanmar's former capital which is on the cusp of economic takeoff as the country's main commercial hub. Yangon was Myanmar's political capital for 120 years before the former military junta in late 2005 abruptly announced that the government's headquarters would be shifted to Naypyitaw, 350 km to the north. Known as Rangoon, the former capital was notorious for its deteriorating, paint-peeling British colonial buildings during the socialist, isolationist years under military strongman General Ne Win who presided from 1962 to 1988. Then came junta rule (1988 to 2010) and the move to the new capital in Naypyitaw which further reduced the development budget allocated to Yangon. As the country's economy creaked open in recent years, the metropolis seemed destined to follow the kind of erratic, private sector-led urban sprawl that characterized the growth of other Southeast Asian capitals such as Bangkok and Jakarta.

Studded with Southeast Asia's biggest and finest collection of British colonial architecture, Yangon's emptied public buildings were at risk of being sold off to crony capitalists to raise funds to build Naypyitaw's 20-lane highways and massive new ministries.

But Yangon's future started to brighten after the 2010 general election, which brought President Thein Sein to power and with him, an unprecedented period of political and economic reforms. The Yangon Heritage Trust, set up in 2012 by Thant Myint-U -- grandson of former United Nations Secretary-General U Thant -- and Myanmar architect Moe Moe Lwin, found a supporter in the former president, albeit less so among some of his ministers. "Six years back, downtown Yangon was turning into a lot of electrical appliance shops, but now you have new cafes, restaurants, souvenir shops, youth hostels and boutique hotels instead," said YHT Director Moe Moe Lwin. The YHT has been influential in preventing the demolition of numerous heritage buildings and has played a role in blocking potential eyesores such as the Dagon City development project. The project was scuttled in July 2015, after Buddhist monks lobbied against it, claiming the construction might undermine the foundations of the iconic Shwedagon Pagoda, Yangon's spiritual apex and the city's main tourist draw. "I think our big success is that we've managed to halt what would have been inevitable a couple of years ago, which would have been the total destruction of the old town," Thant Myint-U told the Nikkei Asian Review.

YHT's role as an advocate for heritage preservation took a new turn in September when it published the Yangon Heritage Strategy, a 150-page document that provides a roadmap for turning Yangon into Asia's most "livable city." The launch was timed to coincide with ambitious new policies of the new government of de facto leader Aung San Suu Kyi and her National League for Democracy, which won the November 2015 general election.

"We have to make a very practical case of why conservation should be a key part of future urban planning. Unless we can integrate a conservation agenda that really makes sense and is realistic, it's very hard to see how we can maintain our momentum," noted Thant Myint-U.

Crucial to maintaining that momentum is the need to prove to a skeptical Myanmar public that there is more to heritage preservation than pandering to elitist aesthetics and nostalgia. To some extent, the private sector has already led the way, driven in part by Yangon's eye-wateringly high rents, a consequence of limited supply and rising demand as foreign tourists and businesses flood in.

"It was economically an easy choice for us," Briels said, calculating the money that the joint-venture travel agency has saved in rent over the past four years, compared with the cost of the renovations they have had to undertake. Briels also invested $25,000 of his own money in the renovation of a century-old building on 44th Street, which he was then able to quickly rent out to a foreign company at $2,500 a month. Before and after shots of a renovated building on 44th Street, now fetching $2,500 a month in rent. (Courtesy of Edwin Briels)

Yangon's notoriously high office rents are starting to fall, thanks to new projects coming on the market. Total office space is expected to reach 230,000 sq. meters by early January, after the complete opening of the newest office tower, Sule Square, estimates Colliers International in Myanmar. Another 300,000 sq. meters will come on the market over the next four to five years, Colliers predicts. With occupancy rates now at 68%, rents declined during the first three quarters of this year, averaging $48 per sq. meter by the third quarter, still considerably higher than similar space in Bangkok, Kuala Lumpur and Jakarta. Even if Yangon's office rents plummet in the coming years, renovated heritage buildings will serve a niche market for those seeking something special. "We were looking for inspirational space," said Tim Mitzman, managing director of Bridge, a film production outfit.

"We just wanted something that was inspiring to us because you want people to enjoy where they work," said Mitzman, who recently renovated an old building on 35th Street, downtown. His partner in the project was Turquoise Mountain, a British charity that is making waves in Yangon's heritage conservation scene.

Turquoise Mountain cut its heritage teeth preserving a 110-house complex in the old part of Kabul, Afghanistan, in a project started in 2006. In 2015 it branched out to Yangon where it joined YHT in the renovation of an old apartment building on 39th Street. With various donors, Turquoise Mountain spent $300,000 renovating the building, at no expense to the tenants. "That was a pure charity project," said Turquoise Mountain's Myanmar Manager Harry Wardill. "It was about doing a demonstration. It was about training people, and it really served its purpose because the chief minister of Yangon opened the building [in April.]" 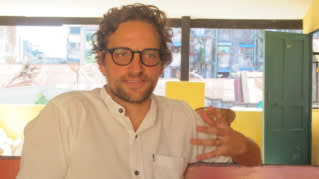 The 39th Street project no doubt helped Turquoise Mountain to secure this year the much more ambitious project to renovate the former Ministry of Hotels and Tourism office on Sule Pagoda Road, which it hopes to complete in 2018. The organization envisions turning the building into a mixed-purpose commercial and public space, with a food court on the ground floor, offices, a tourism center, exhibition hall and rooftop gardens and restaurants.

"You've got this wonderful building right in the center of the city, so of course it's got an economic future," Wardill said. How the project will be managed and financed is still under discussion. City authorities are looking into setting up a joint committee to manage the site and look for funding options.

One option for finance might include setting up a trust company, similar to the one set up in the U.K. to manage the historic Somerset House overlooking the River Thames in central London, which generates about 12 million pounds ($15.2 million) a year in income. Wardill anticipates that about $5 million needs to be raised for the project.

The Somerset House Trust model might one day serve to finance the holy grail of Yangon heritage renovation -- the Secretariat building, the massive former seat of British colonial rule in Myanmar. It is also the location where independence hero General Aung San -- Suu Kyi's father -- was assassinated on July 19, 1947. That day, now known as Martyr's Day, is the only time when the crumbling complex is opened to the public. The new government is now pondering a vehicle similar to the Somerset House Trust to renovate the Secretariat, but the project would require a minimum of $200 million-$300 million, a vast sum for Myanmar's cash-strapped government. YHT's Thant Myint-U would prefer to see city authorities concentrate first on renovating a cluster of "grand" government-owned buildings in the center of downtown around Scott Market, Sule Pogada and Strand Road, possibly using a public-private partnership model to raise the financing.

"The more you group these buildings together, the more you can think about your financing possibilities," Thant Myint-U said. "There are lenders who may not want to lend a million dollars or half a million dollars [to a smaller renovation] but if this is going to be a $30 million to $40 million project they might find it that much more attractive. We would like to have a scheme in which investors would see quite high returns." So, presumably, would the potential investors.