The chef, the bartender, the sake brewer and the entrepreneur

Four women at the forefront of Japanese gastronomy TOKYO -- Japan may lag behind other developed countries when it comes to gender equality in the boardroom, but more and more women are taking the lead in hospitality, an increasingly important sector for Japan's economy.

"Women have always been present in the world of food and drinks -- for example, in farming and winemaking, as well as in restaurants -- but many left their jobs after having children. Now, the industry is changing and more women in the younger generation are entering these fields," says Hiroko Sasaki, food journalist and co-founder of the seafood sustainability group Chefs for the Blue.

While harsh labor conditions have traditionally shut females out of professions such as sake brewing and the restaurant business, a rise in the number of women in prominent positions has led to improvements in the workplace. If more women go into food production, Sasaki posits, "they might make the industry more sustainable, as surveys have shown that women in their 30s and 40s have a strong interest in the environment."

Here, we speak to four of the women at the forefront of Japanese gastronomy.

In Japan's male-dominated restaurant world, Natsuko Shoji stands out as a role model for aspiring female chefs. Shoji's art-filled bijou restaurant, Ete, is one of Tokyo's most exclusive eateries, with a single table for only six guests per night.

Named Asia's Best Pastry Chef in 2020, Shoji is best known for her exquisite cakes, which reflect her twin interests in food and fashion. Inspired by textile patterns from iconic fashion houses such as Chanel, her pastry compositions are artfully arranged in bespoke boxes and sell for hundreds of dollars. 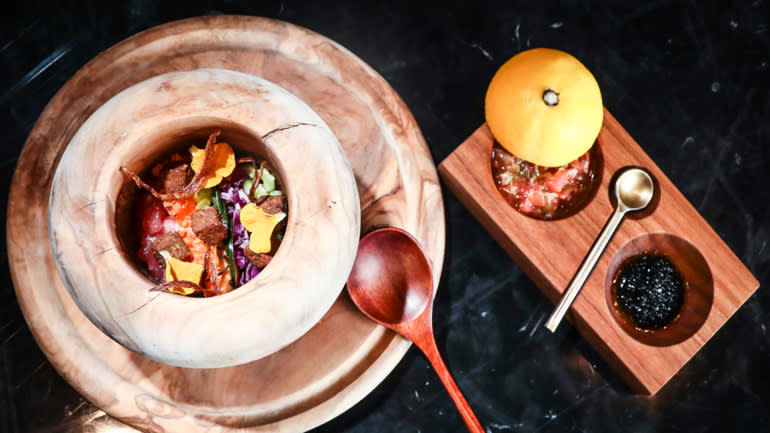 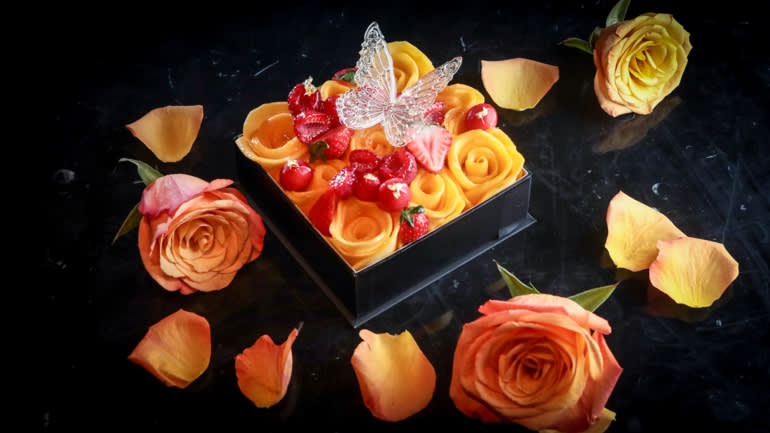 She opened Ete when she was just 24, following a three-year stint at Michelin-starred Florilege, where she ascended to the rank of sous-chef. But when she decided to start her own business, she encountered obstacles securing a government loan.

"At that time, I was 22 or 23, with no track record. I was told that a woman my age asking to borrow a large sum of money was impossible. It was one of the most difficult things I had to deal with," Shoji recalls.

Once she succeeded in raising funds, the next hurdle was finding staff.

"If I'd been older and already famous, it might not have been an issue, but particularly in Japan, a lot of men have a problem with the idea of working for a younger woman," she says, noting that the cooks at Ete are all female. 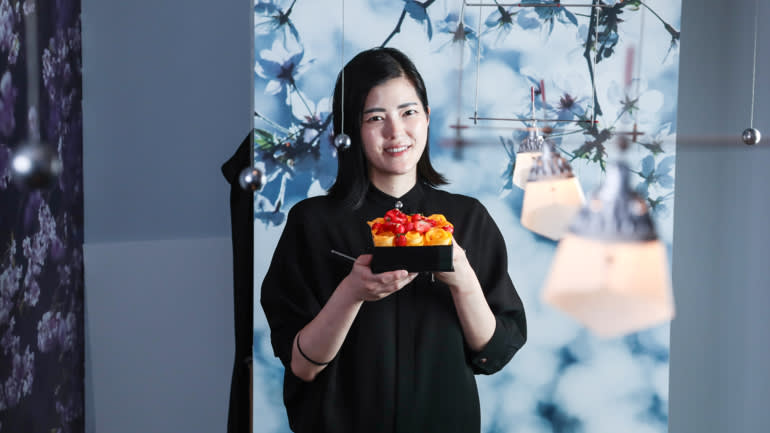 Named Asia's Best Pastry Chef in 2020, Natsuko Shoji's main advice to young women who want to be chefs is: "Commit to your career and give it your all." (Photo by Yuki Kohara)

Having overcome those early struggles, the steely and outspoken chef has gone from strength to strength. This year, Shoji collaborated with graphic designer Verdy to produce a line of accessories and was selected as one of the 50 Next rising-star figures in gastronomy by the World's 50 Best Restaurants academy.

In late August, she opened Fleurs d'Ete, a cake shop named after her signature confection -- a delicate tart of sliced mango petals shaped into roses atop a cookie-and-custard base.

She also gives lectures at her former high school to mentor students and teach the importance of sustainability. To young women who want to become chefs, she offers the following advice: "First of all, commit to your career and give it your all. You must be unwavering in your focus. If you do that, everything will fall into place naturally," Shoji says.

Award-winning bartender Yukiyo Kurihara developed a fascination with cocktail culture at an early age. While working as a waitress at a hotel during her student days, she began to realize that great mixed drinks are more than the sum of their boozy parts.

"At first, I loved the colors," Kurihara explains. One evening, after a female customer requested a red cocktail to complement her dress, Kurihara registered the guest's delight at the vermillion-hued tipple the bartender had prepared. The experience was an epiphany that showed her the power of bartending and hospitality.

Embarking on a career as a mixologist in 1996, she discovered that she had a knack for layering flavors and aromas. "Like a chef, I think of myself as an artisan," Kurihara says.

After refining her technique at the Intercontinental Hotel in Tokyo, she was considering opening her own bar in the Ginza district when she landed the position of chief bartender at Mandarin Oriental Tokyo. During her 15-year tenure at Mandarin Oriental, where she led a brigade of all-female bartenders, she honed her management skills and learned the art of hospitality at the highest level. "Our goal was to make the guests more than happy. We wanted them to feel completely satisfied and cared for," she says.

Now, as manager of The Grey Room, a swanky lounge above Indian fine-dining restaurant Spice Lab Tokyo, Kurihara works with a diverse team to create beguiling elixirs redolent of South Asian spices. The signature Mumbai Tonic contains anise-infused gin and fresh rosemary, while the Butterfly is a colorful zero-proof cocktail with a layer of golden apple juice floating above lavender-tinted wine vinegar shrub.

She hopes to inspire more women to take up bartending. "Women bring a different approach to making drinks, so our industry needs to be more flexible and open-minded," Kurihara says. "Bars should be a welcoming space." 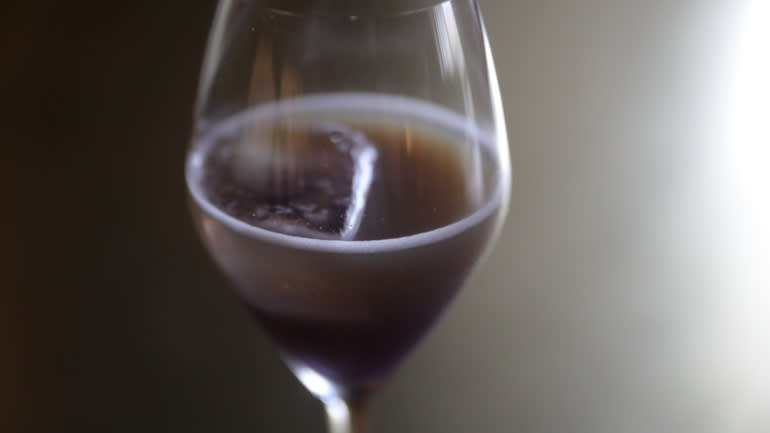 The Butterfly: a zero-proof cocktail with a layer of golden apple juice floating above lavender-tinted wine vinegar shrub. (Photos by Ken Kobayashi)

Growing up in the idyllic fishing village of Ine, on the northern coast of Kyoto Prefecture, Kuniko Mukai had dreamed of "working with the sea" one day. Her father, however, had other plans for his eldest daughter. Hoping that she would take over the family's sake-making business at Mukai Shuzo, he offered to send her to the Tokyo University of Agriculture -- on the condition that she study brewing.

"It was either that or nothing, so I joined the program," Mukai says with a laugh.

There, she met Professor Masahisa Takeda, who opened her eyes to the creative possibilities of sake-making. At Takeda's suggestion, she began experimenting with an heirloom strain of red rice from the region near her hometown. Her early attempts were unsuccessful, but she persisted: "I decided to immerse myself in this industry," Mukai explains.

Returning to her family's brewery after graduation, she became one of Japan's first female toji (master brewer) at the age of 22. Shortly after taking the reins in 1998, she launched Ine Mankai, the red-rice brew that has become Mukai Shuzo's flagship brand.

With its delicate sweetness and earthy umami complexity, the rose-colored sake has made it onto menus at top restaurants such as three-Michelin-starred Noma in Copenhagen, and Mukai is regarded as one of the most innovative brewers in the country. Being a sake brewer is a notoriously demanding job, but Mukai manages to balance her work with family life. 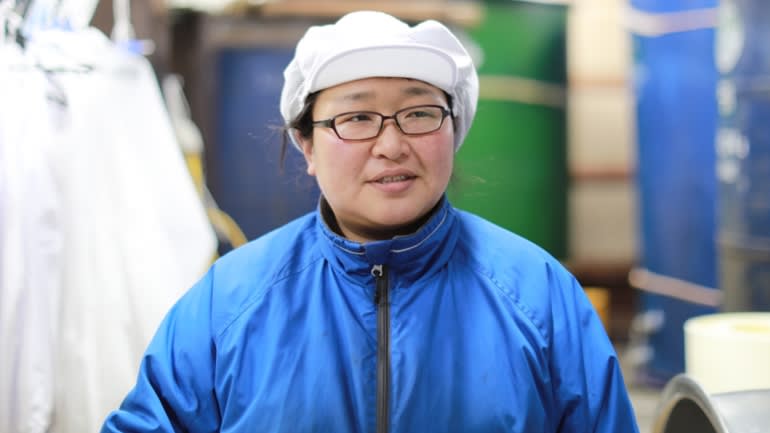 Growing up in the idyllic fishing village of Ine, on the northern coast of Kyoto Prefecture, Kuniko Mukai had dreamed of "working with the sea" one day. Today she is regarded as one of Japan's most innovative brewers. (Photos courtesy of Black Market Sake)

"Early in my career, our accountant advised me not to have kids, but I ignored him. We have two wonderful children and we have a lot of fun together," she says. Like her decision to become a sake brewer, it's a choice about which she has no regrets.

Her interest in the field began 10 years ago when she began to serve as president of the International Gastronomy Academy of Japan, an organization seeking to achieve diplomatic objectives through food. Her research into the food and fashion sectors opened her eyes to the negative impact of these industries on the environment.

According to statistics from the Ministry of the Environment, food loss in Japan amounted to 25.3 million tons in 2018, with edible food waste accounting for 6 million tons of the total figure.

"The problem got worse during the pandemic," Yamada notes. "When restaurants and schools were forced to close, suppliers had nowhere to ship their fresh ingredients." 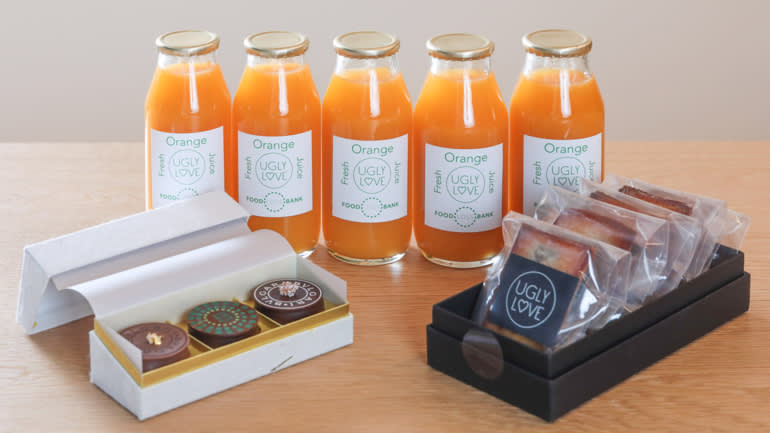 Working with established brands, Yamada explains, helps raise awareness among consumers and ensure that producers are paid a fair price. "A lot of sustainable development efforts rely on donations and volunteering, but we have to move to a model of creating shared value to make these projects financially sustainable," she says.

"I want people to believe in 'the power of one.' When it comes to food waste, anyone can make a difference," Yamada says.