The cutting-edge of cutting: How Japanese scissors have evolved 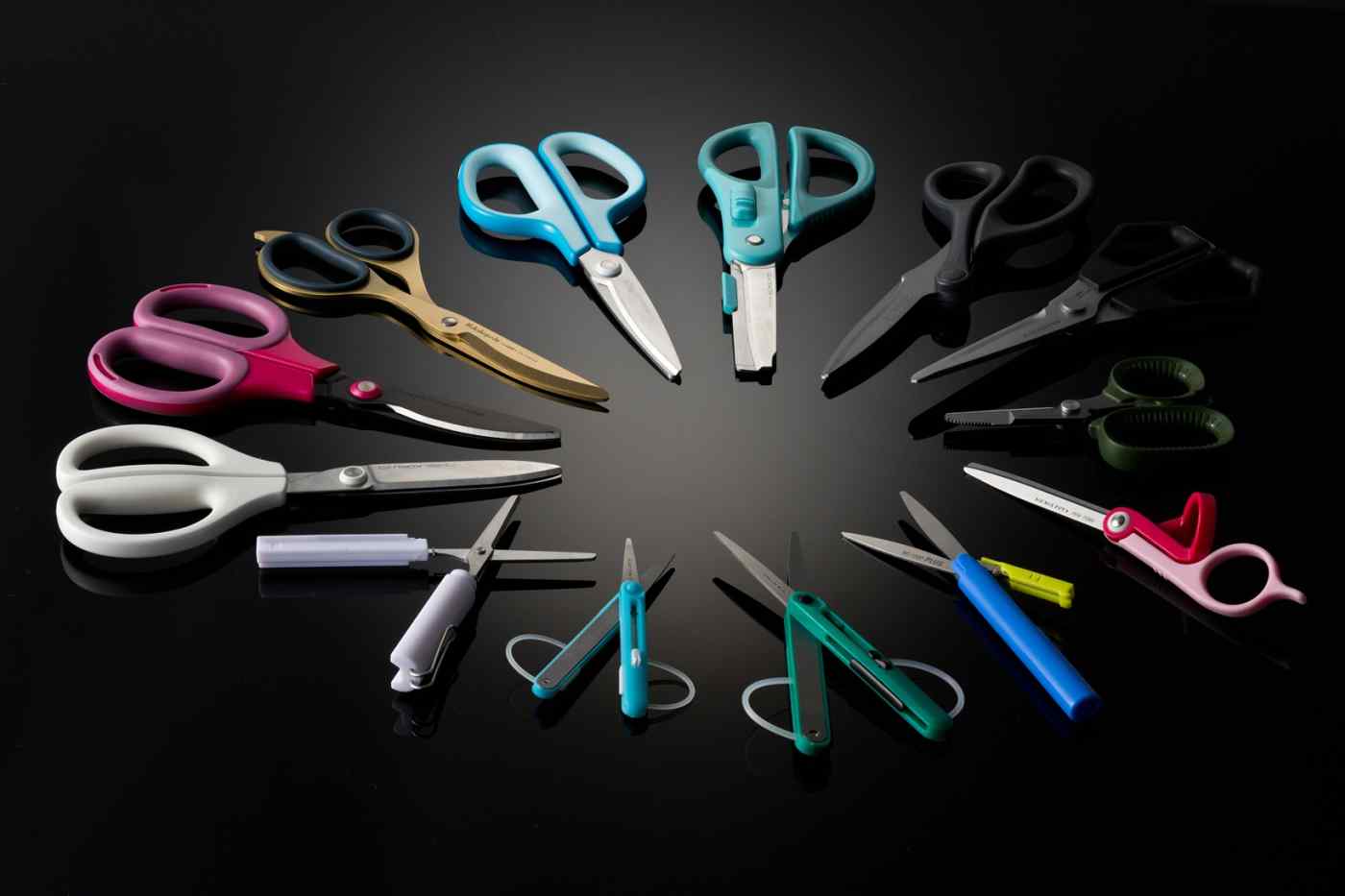 Modern-day pairs of scissors have lost that iconic orange-handled design but make the task of cutting -- or getting into a parcel from Amazon -- much easier.
YASUKUNI NOTOMI, Contributing writerFebruary 19, 2018 15:30 JST | Japan
CopyCopied

TOKYO -- Inside Tokyo stationery stores, scissors are undergoing a quiet evolution. The familiar tool has become smaller, easier to cut with and multi-functional. Here is a rundown of the latest products.

Scissors go back millennia. An ancient mural in Egypt depicts a pair and, in Greece, some have been excavated from ruins dating back to around 1000 B.C.

The first stationery-use scissors are believed to have been created around 1880 by Finnish manufacturer Fiskars. But these Scandinavian scissors would not take the form we know today until 1967. It was the same company that then came up with the iconic orange plastic-handled scissors that are light in weight and easy to use. They went on to become one of the company's best-known products.

By the 1960s, scissors had evolved into designs specific to dressmaking, gardening, surgery and other purposes as manufacturers sought durability and ways to make the tool better cut through various materials. In the meantime, general-use scissors, those typically found at stationery shops, did not evolve much. 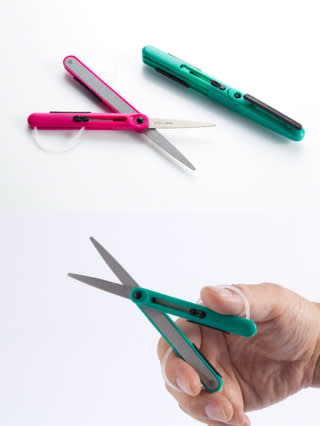 But in the early 2000s, Japanese companies started to produce scissors with distinct features, like compactness.

Because of their uneven shape, scissors tend to be bulky. Unlike pencils, they do not easily fit into cases, and their presence on desks can be awkward. If this is a design problem, it cannot be solved by making smaller scissors; this would merely compromise the tool's utilitarian nature.

Pencut is a pair of scissors that resembles a pen when not in use. The pair is made by Tokyo-based Raymay Fujii, which gave the Pencut retractable loops of a soft elastic on each gripping end. A tightly fitting cap covers the blades. When the tool needs to be tucked away, it can fit into a pencil case.

The Pencut has relatively long blades for its size and good cutting performance. This last trait made it an instant hit. Smaller products had come along before but took the typical scissors shape and never earned an "easy to use" reputation. 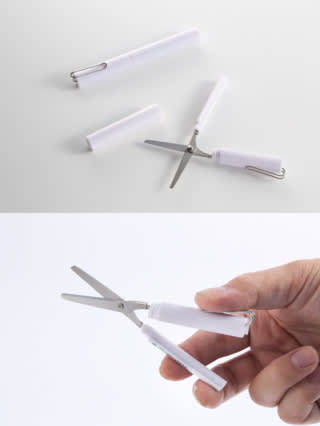 The Pencut changed all of this, touching off a wave of new compact products from other producers.

Kokuyo took a different approach to pairing compactness with usability. The handle loops on the Osaka-based company's Hosomi scissors are staggered so that they align on one side along the length of the tool when closed, achieving a narrower profile compared to traditional scissors.

Raymay Fujii then responded to all the competition it kicked off by introducing the Pencut Mini.

The trend toward compactness remains apparent in stationery shops.

There is another trend in Japan's scissors world, one in which new ideas are being applied to cutting performance. Cutting ability is not determined by sharp edges alone. Blade shape, the angle at which the blades come together and how the blades move against each other also significantly impact performance.

This renewed pursuit of better-cutting scissors was touched off by the Fitcut Curve, hatched by Plus, a Tokyo stationery and office equipment maker. The scissors have blades that curve away from each other in a way that makes them always meet at a 30-degree angle along the entire length of the blades. The feature makes it easier for Fitcut Curve to cut through hard or thicker objects at the part near the tip of the blades. 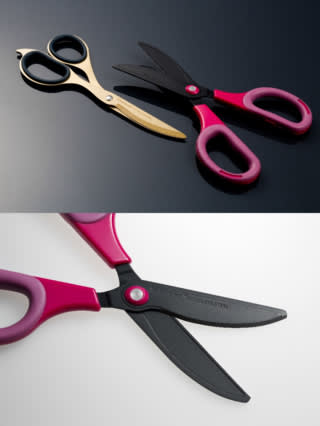 The superior performance is apparent to anyone who picks up a pair and cuts with it. The Fitcut Curve made rival companies realize that scissor performance can be improved by means other than sharpening the edges and prompted them to come up with enhancements of their own.

Nakabayashi did this with the Hikigiri, whose design was guided by artists in Seki. The town, in the middle of Japan, has a long history of producing high-quality blades. The Hikigiri's flat lower blade and curved upper blade give the scissors a longer cutting edge.

In the process of closing the blades, the upper edge travels longer than the lower blade, causing more friction at the cutting point and thus enhancing cutting performance. Seki natives are now calling this the hikigiri, or pull-cut, effect. The scissors require as little as one-fourth the force to cut the same material compared to regular scissors, according to Nakabayashi. The same principle -- each blade edge traveling a different distance -- is employed in Raymay Fujii's Swingcut, which, instead of having a curved blade, has a pivot deliberately located away from the axis so that one edge travels longer than the other.

Kokuyo's Airofit Saxa and Saxa, an upgraded version of the former, have blades that both curve away from each other so that the angle they form at the cutting point is wider than if they were straight. This strategy improves performance, especially near the tip. Multiple other features also enhance performance. The blades, for example, are shaped in a way that makes them less prone to attract sticky stuff when slicing through duct tape. The gripping ends, meanwhile, extend deep into the plastic handle, ensuring maximum clamping force.

These performance-focused products are all easy to operate, comfortable to hold and do their one job well.

Having long ago ushered in the compact and cutting-performance era, Japanese scissor makers recently embarked on a quest for multifunctionality. Plus' Fitcut Curve Twiggy, with its blades closed and a cap on, is compact enough to fit in a pencil case. But the product also features the same curved blade design of its Fitcut Curve sibling for enhanced performance.

The Midori Portable Multi Scissors measure 10cm in length. Tokyo-based Designphil created the scissors to slice through credit cards, iron wiring and other rugged materials. And one of the scissors' blades has a serrated back so it can be used to cut open boxes being held closed by duct tape.

Similarly, Kokuyo's Hakoake is specifically designed to perform multiple functions associated with opening items that arrive inside cardboard boxes. The scissors can slide through duct tape, cut tough plastic bands or plastic ties attached to tags and open any envelopes that show up with the order. 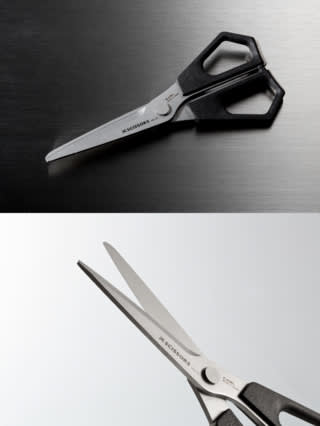 Perhaps the ultimate cutting product to come forth from the recent two-bladed boom is a product called Xscissors, made by Tokyo's Carl Manufacturing. Artisans were hired to sharpen the edges of these general-use scissors' 3mm thick blades. The more muscular blades add durability, and the rear ends of the blades extend right through to the ends of the handles to maximize gripping force.

Carl's new tool is so good and so straightforward that the model could be a harbinger of yet another round in the Japanese scissor industry's game of one-upmanship.

Yasukuni Notomi is a writer who has covered the world of stationery for many years.