South Asia's foremost feminist talks about her past Over the last five decades, India's Kamla Bhasin, 75, has cemented a place in the history of South Asian feminism as an outspoken champion of women's rights.
SAFINA NABI, Contributing writerApril 24, 2021 08:00 JST | India
CopyCopied

NEW DELHI -- It was the injustice of not having pockets in her clothes that set Kamla Bhasin on the road to fighting patriarchy in India.

"Our clothes don't have pockets, since I used to play marbles, a pocket was essential for me and while climbing trees, the frock would grind me to a halt in branches. So, I noticed that these clothes are restricting my freedom and I abandoned the garments meant for girls," said South Asia's foremost feminist.

Bhasin, who is celebrating her 75th birthday today, has cemented her place in history as an outspoken champion of women's rights in South Asia, a region still steeped in sexism and where women and girls are often considered the property of the men in their lives.

Bhasin has fought this system of thought and behavior all her life, through her extensive writings about gender and women's rights, forging a distinguished career in righting those wrongs. The founder of Sangat, a South Asian feminist network that she still works for as an adviser, has over the last three to four decades conducted many courses on feminism, human rights and sustainable living.

Juggling other roles at organizations such as JAGORI, a women's resource and training center in New Delhi, and One Billion Rising, Bhasin told Nikkei Asia how she ended up on such a journey.

Born in a village in west Punjab in Pakistan just before the India-Pakistan partition, Bhasin could see that the odds were stacked against her and the other girls from a young age. But unlike her friends, she was not afraid to speak out against the injustices she could see around her. Even more unusual was that she had parents who did not try to quell that spirit.

Bhasin recalls the time when she was forced by her father to have her ears pierced -- a traditional ritual. "I was angry and furious about it and began shouting. I woke up in the middle of the night and removed the thread. Afterwards, my family never asked for it again."

After Partition, Bhasin and her parents finally settled in Rajasthan in India where her father practiced as a doctor. In part, it was this move that freed her from family expectations. 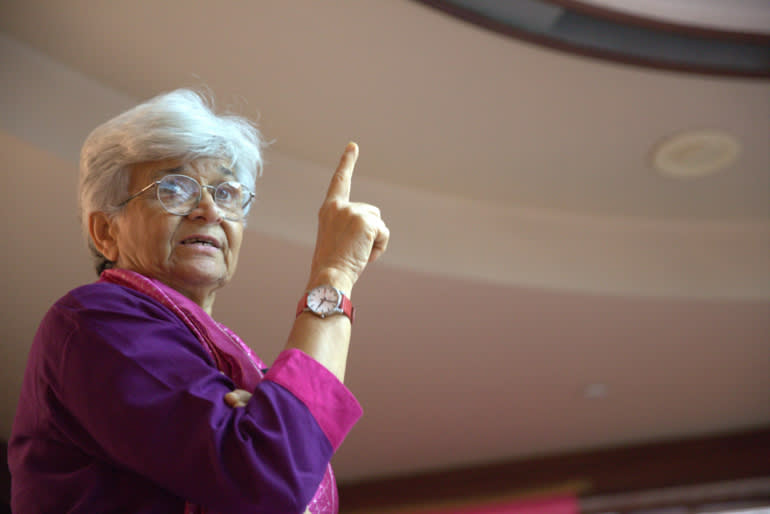 When Bhasin's father forced her to have her ears pierced, she began shouting in protest: "I woke up in the middle of the night and removed the thread. Afterwards, my family never asked for it again."

"We had full freedom at home to do whatever we might like and that I believe it had been because we did not have extended family nearby. There was no grandfather, grandmother or uncles and aunts to stop or criticize, and Rajasthani people thought my parents are foreigners and their daughter is like this, let it be," Bhasin said.

Bhasin attended a one-room government school where the students were taught by one teacher. "I wasn't an excellent student but was good at sports and other co-curricular activities. I used to play a lot that's why I am still strong physically," she said, laughing and flexing her muscles.

After completing her masters in Jaipur, she left for Munster for a two-year course in sociology. With no money to fly to Germany, her journey by ship took 24 days.

Returning from Germany in 1972, she started work in Udaipur in a nongovernment organization called Seva Mandir which was focused on alleviating problems of water scarcity and poverty in the area.

"Through this organization, I worked with villagers against poverty. This gave me the opportunity to closely see the biases about caste, and gender. Here I also understood [that] among [the] poor, women are poorer and among Dalits, women are [considered to be even] more Dalits," she said, referring to the lowest in the Indian caste system, also called the "untouchables."

"This was the time when I had become a feminist at an intellectual and emotional level," Bhasin said.

United Nations offered her a job in 1975 in Bangkok where her work was also focused on alleviating poverty and hunger. After four years there, she was transferred back to Delhi which was at the time transfixed by a high-profile rape case involving a young Indigenous Adivasi girl called Mathura.

Two policemen were accused of raping her in a police station in Maharashtra, but acquitted in 1974. The family appealed the judgment, but the Supreme Court, again, ruled against Mathura in 1979, citing a lack of visible injury. Despite decades working to help assert women's rights, Bhasin feels there is so much more to be done: "So many of my countrymen commit violence against women and girls."

As a result of this ruling, a number of women's rights groups were formed in Asia. The case compelled Bhasin to do something to shine a light on such injustices against women.

She started to write songs, slogans and plays that delved into the entrenched biases in the judicial system. "To highlight these injustices, I started to write so that people remember these songs and do not forget the cruelties happening with women," said Bhasin.

Since then, Bhasin's work has also moved into broader human rights, sustainable development, and justice systems. She now lives in New Delhi with her son Jeet Kamal where she conducts courses and continues to write. Her most well-known course is a monthlong program, part of the Sangat network, for women across Asia every year in Nepal focused on gender issues, feminism, human rights and sustainability.

"She showed me the way towards light and love, I am adamant to follow her footsteps, the positivity I carried back with me after attending her course at Nepal in 2018," said Nova Ahmed, a computer scientist based in Bangladesh.

Another attendee of her course is Hafsa Mehmood, a community development worker from Pakistan, who said: "Stepping onto a new road is not easy; it becomes more difficult when [the] new road leads to 'feminism' and challenging patriarchy. I remember the time when I lit the candle during my course, I felt that I am lighting my own self to strongly going forward."

Dr. Ambreen Ahmed, a child and adolescent psychiatrist, from Pakistan who has worked with Bhasin for more than 20 years referred to her monthlong course as being "amazingly unique" as the teachings are interspersed with music and dance and injected with "love, laughter, honest dialogue."

Despite the decades that she has spent in helping to assert women's rights, Bhasin feels there is still more work to be done. She said: "So many of my countrymen commit violence against women and girls. Our families have to work harder and nurture gentle, non-violent, and equality-loving sons."