Despite poaching and corruption concerns, the big cats are being reintroduced PHNOM PENH -- Just 20 years ago, Cambodia was a country that many travelers to Southeast Asia skipped over to get to Thailand, Vietnam and other regional rivals. These days, they are flocking to see the country's pristine beaches, picturesque pagodas and famed Angkor temple complex.

In 2016, international arrivals to Cambodia increased by an annual 5% and pushed past 5 million, a number that is expected to increase by 11.5% this year and signifies a massive boost from the total of roughly 1 million tourists who visited in 2004.

But fears about limited scope for growth have spurred the government to consider new strategies to ratchet up tourism even further. One of the latest initiatives is "tiger tourism." Officials are aiming to bring the big cats, which have been functionally extinct in Cambodia since the last one was seen in 2007, back to the kingdom, a plan that they hope will bring both international praise for the revival of an extinct species and financial gain in the form of tourism returns. 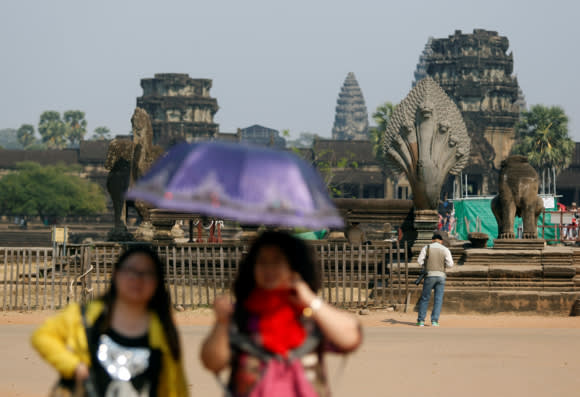 Tourists have flocked to Cambodia's scenic spots like Angkor Wat, but the country is seeking a further boost by developing hitherto untapped eastern provinces.   © Reuters

In early October, Thong Khon, the minister of tourism, told a workshop on ecotourism and wildlife that the ministry was aiming to turn Cambodia's eastern provinces, which are largely ignored by tourists, into a wildlife haven buoyed by its new tigers.

"The ministry of tourism aims to develop the northeast, especially Mondulkiri [Province], to make it one of the country's major tourist draws, particularly for ecotourism and wildlife," he said.

But the reintroduction plan has brought its share of criticism. Poaching is still endemic in Cambodia, and some are concerned that the Srepok Wildlife Sanctuary in Mondulkiri Province, where the tigers will live, lacks sufficient habitat and prey for the animals.

In 1999, Cambodia was said to have the world's second-highest tiger population, according to the Cat Action Treasury, a U.S. wildlife nongovernmental organization. By 2007, that population was virtually extinct, and the last Indochinese tiger spotted in Cambodia was captured by camera trap roaming Mondulkiri Province.

Though some experts doubt the claim that Cambodia had hundreds of tigers in the late 1990s, it is still indisputable that many of them died from poaching, habitat destruction and other reasons. And in Cambodia today, where record deforestation and rampant corruption still contribute to environmental devastation across the country, things do not look much better.

But Cambodia has been inspired by the success of nearby India, a country that has more tigers than anywhere in the world and boasts lucrative tiger parks of its own. In these sanctuaries, tourists can ride in jeeps and catch glimpses of the big cats. Keeping the tigers in properly managed environments is one way to conserve and protect the endangered animals, and develop a lucrative new revenue stream from tourism, officials believe. Though Cambodian officials are not sure where the new tigers will be sourced from, some media reports cite India as a possibility.

But early indications suggest it will not be an easy challenge for Cambodia, at least in the short term. The country has nowhere near the facilities that parts of India boast, particularly in its remote eastern provinces, which lack infrastructure and resources.

John Goodrich, senior director of the tiger program at Panthera, an international organization devoted to wild cat conservation, said that it took India decades to develop a robust system of tiger parks, as training tigers to become used to intrusive humans is a timely process.

"This is something that would be developed over the course of decades," he said. "You have to build up the tiger numbers and then you have to condition them to tourists. One of the reasons it works in India is there have been jeeps full of tourists driving around these tiger reserves for decades, and some tigers become conditioned to that and they do not run away and hide when a jeep approaches.

"That's going to take a long time to develop in Cambodia."

Antony Lynam, regional adviser for the Asia programs at the Wildlife Conservation Society, explained that India has strict guidelines that keep tiger tourists in check and police officers equipped to deal with any mishaps. However, tiger poaching is on the rise in India, with a 63% increase between 2014 and 2016, according to "Down to Earth," an Indian conservation-focused publication.

"When you go into a park [in India] there are gates, rules and regulations," he said. "Those regulations are not broken. There are rangers that enforce the regulations. You can't walk around in the park. You have to go by vehicle. You can only go in certain numbers of vehicles at a time. It's very well-regulated, it's very well-managed."

He added: "Potentially in the future that can be the case in Cambodia but right now they're not ready."

Whether Cambodia is ready or not, the government is moving ahead with the tiger reintroduction plan. An official from the ministry of environment said that the "Tiger Action Plan," a detailed outline of the project, would be completed before the end of 2017. All in all, he said, the project would cost somewhere around $30 million.

Chhay Sarath, deputy director of the department of tourism investment for Cambodia's ministry of tourism, told the Nikkei Asian Review that the government was planning to develop four distinct tourist zones within the country: the bustling capital of Phnom Penh, the temple complexes surrounding Siem Reap, the coastal zone in the south and, soon enough, the lush eastern provinces that already host a smattering of wildlife, including 18 endangered species within the Srepok Wildlife Sanctuary, where the reintroduced tigers would be placed.

China is by far the main source of tourists to Cambodia -- with nearly 743,000 Chinese visiting in the first eight months of this year, an increase of 44% from the equivalent period in 2016. But Cambodia's tourism ministry is counting on Western tourists to be the most interested in their ecotourism endeavors, Sarath said.

"Cambodia has almost become a middle-income country," he added, "so the domestic tourists also play an important role."

While Sarath did not supply an estimate of expected revenues from the "tiger tourism" initiative, he expressed confidence that it would draw enough tourists to generate a sizeable return on their investment in the big cats.

"So if we do proper marketing ... and we just take only 20% of those five million international tourists who visit [Cambodia], it's more than enough to make money," he noted.

Some international tiger experts, however, say that Cambodia may not be ready yet to take on a cohort of new tigers. Though the country's autocratic Prime Minister Hun Sen has publicly expressed his goodwill toward the project, there are still concerns, both local and foreign, about whether the country, with its long history of instability and its lack of expertise, can keep the new tigers safe and healthy.

"I think that to manage tiger tourism it's going to take a lot of training and a lot of effort to get to the point where they can handle it like they do in India," said Lynam of the Wildlife Conservation Society. "There's going to be probably another decade of getting the right people, setting up the business model and monetizing it in a way that's sustainable and also benefits local communities. There's a lot of work."