TOKYO -- Tokyo remains the world's third most appealing city and is approaching second-ranked New York, according to a report released Thursday. Asian cities placed strongly in the ranking by the Institute for Urban Strategies of the Mori Memorial Foundation with Singapore winning fifth place followed by Seoul in sixth and Hong Kong in ninth.

London retained its position as the most attractive city in the world.

The institute's Global Power City Index 2017 ranked 44 global metropolises for their "magnetism," or ability to attract creative people and businesses, in six categories -- economy, research and development, cultural interaction, livability, environment, and accessibility. A total of 70 indexes, including gross domestic product and the number of researchers and international conventions, were used to measure the attractiveness of major cities around the world.

Closing in on NYC 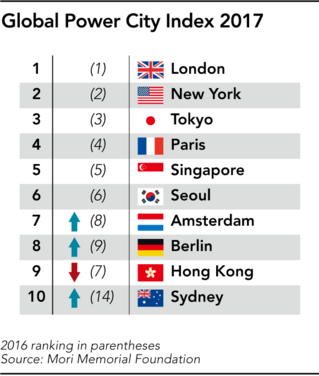 Tokyo, which surpassed Paris to become the third most appealing city for the first time in 2016, scored high in cultural interaction and accessibility, bolstered by growth in theaters and concert halls as well as foreign visitors and direct international flights and commuting, said the institute which began to rank global metropolises in 2008.

London gained significant points across the board. Other European cities, such as Amsterdam and Berlin, also stayed highly appealing, as did Asian cities such as Singapore.

High scores gained by Tokyo in cultural interaction and accessibility reflect stepped-up preparations to accept inbound visitors before the 2020 Summer Olympics in the Japanese capital.

Tokyo scored 1,354.7 points overall, narrowing New York's lead from 46 points in 2016 to 31, as the U.S. city has remained stagnant in the standings following the collapse of leading American investment bank Lehman Brothers in 2008.

"Competition between the two cities will intensify considerably in a year or two," said Hiroo Ichikawa, professor of Meiji University and executive director of the foundation, suggesting that Tokyo may soon surpass New York.

But Tokyo, which used to be strong in economy, sank to fourth place from first in the category because of the yen's depreciation, slow growth of GDP, low economic freedom and high corporate tax rates. In livability, Tokyo saw its place drop to 14th from sixth as it scored low in terms of social freedom, fairness and equality symbolized by, among others, women's delayed advances into society.

Although Tokyo rose in cultural interaction, the institution pointed out that the number of five-star and other luxury hotels is smaller there than in London and other major Asian cities.

Singapore remained ranked fifth and narrowed the gap from Paris at No. 4. While staying high in environment as demonstrated by low density of suspended particular matter, Singapore also scored high in other categories including economy as well as research and development.

Seoul and Bangkok, ranked sixth and 33rd, respectively, climbed in cultural interaction due partly to an increase in the number of international conventions held there. Bangkok was also deemed attractive because of growth in the number of art and other museums and visitors from abroad. Seoul gained high points in research and development as well, reflecting the number of registered patents and researchers.

Hong Kong fell to ninth place from seventh, due largely to slowed growth of GDP but continued to earn high marks in accessibility.

Cities in mainland China, such as 13th- and 15th-ranked Beijing and Shanghai, boosted their scores on growth in economy but failed to rise in overall rankings because of low positions in the environment category. Beijing and Shanghai ranked 43rd and 41st, respectively, in the category.

London solidified its No. 1 position, led by growth in cultural interaction including attractive dining and foreign visitors. The ranking of the city has yet to be affected by Britain's decision to withdraw from the European Union.

Amsterdam, Berlin and other major European cities, which have advanced environments for information and communications technology, retained their high position because of large scores in livability.