TOKYO -- A plan to convert an elevated highway into a park is underway in Ginza, a bustling Tokyo neighborhood known for its luxury shopping scene.

In light of plans to move another Tokyo thoroughfare underground, Taito Yamamoto, head of Chuo Ward, where Ginza is situated, seeks to build a new underground highway to replace the Tokyo Expressway and to turn the old road into a green space.

Yamamoto presented the plan to Tokyo Gov. Yuriko Koike on Monday. "I hope to create a green promenade full of people, like the High Line in New York," he said, referring to a park built on old freight train tracks that has become a popular tourist destination.

"We will draw on examples overseas to find a new use" for the road, Koike said. "This is a radical idea that symbolizes a vision for an era after the auto era."

The 2 km Tokyo Expressway connects the Yaesu and Shinbashi districts. Its operating company, which counts advertising agency Dentsu and property developer Mitsubishi Estate among its investors, also runs large shopping malls in the area. Rent from these properties allows the company to open the road to the public for free.

Chuo Ward is also proposing to turn a stretch of another highway near the old Tsukiji fish market into a park.

"I want to create a symbol for Tokyo as a green an environmentally friendly city," Yamamoto said.

He urged Koike to complete the redevelopment of the Tsukiji site by 2029. "It will be difficult to maintain foot traffic in the area if we take 20 years or more," he said, while pushing for a new subway line to connect central Tokyo to the coast. 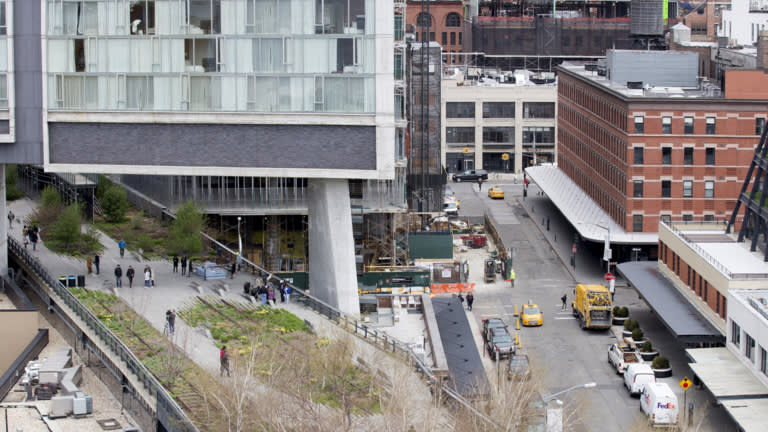 The High Line park is seen from The Whitney Museum of American Art as it passes under the Standard Hotel in New York's meat packing district.   © Reuters