Tokyoites find dream life in rural Japan can be alienating A screenshot of a video by the city of Kochi's immigration and settlement promotion office, depicting the challenges of adjusting to country living.
KEN HOTAI, Nikkei staff writerOctober 2, 2019 06:39 JST | Japan
CopyCopied

KOCHI, Japan -- As more Japanese shun urban hustle and bustle for the lower-cost tranquility of the countryside, many transplants find themselves grappling with culture shock.

Kochi, a southwestern city with a population of 330,000, is recommending a "warmup" period before making the leap.

Its two-step immigration program invites interested households to stay here temporarily to accustom themselves to the area, using the city as a base to find a place elsewhere in the prefecture where they would like to live. The city offers subsidies of up to 200,000 yen ($1,860) to cover a month's rent along with moving and other expenses.

To dispel romantic illusions about country living, it has released a four-minute video on how alienating Kochi might feel to urbanites -- literally.

"Lately, the people in town have started to seem like aliens," one of its stars laments. 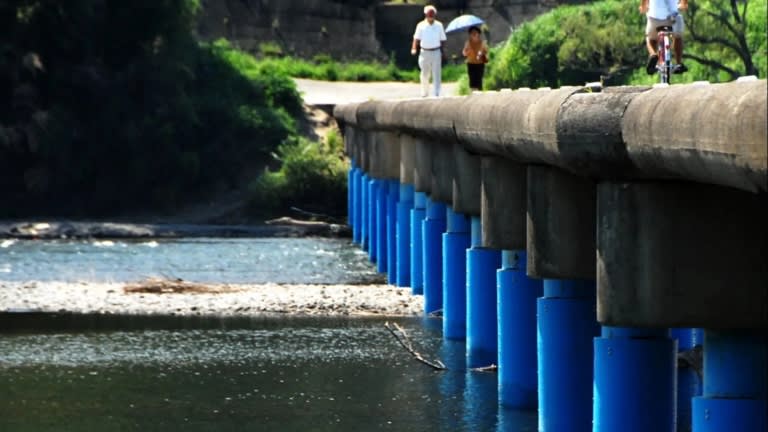 People walk over Kochi Prefecture's Shimanto River, one of the cleanest rivers in Japan. Rural tranquility holds appeal for many fed-up urbanites.

The young Tokyoite transplant confides in a local man about his trouble adjusting to the culture and customs of his new home. When the Tokyoite looks up, the local man's head has turned into an alien's.

He admits that he is thinking of moving back to the capital.

But when the local man replies, the Tokyoite now has the alien head. From our perspective, you look like an alien, the local explains.

"It's impossible for you and us to understand each other right away," he says. "We just have to take the time to gradually bridge the gap between us."

Kochi is promoting this campaign on social media with a hashtag that translates to "country life isn't easy."

A total of 290 people relocated to Kochi from outside the prefecture in fiscal 2018, up 60% from five years earlier, according to a survey by the city. Such migration is a critical source of new blood for areas that have steadily declined in population as the Japanese birthrate falls and young people leave for greener pastures in cities like Tokyo.

Yet more than a few move back out after finding that their idealized expectations do not mesh with reality. One in 6 households that relocate to rural areas from urban areas end up leaving, a poll cited by the Kochi campaign says.

One 51-year-old man who moved to Kochi this April told Nikkei about a fellow urbanite who sought to relocate to a farming village in the prefecture. The newcomer went around to residents' homes, asking to rent unused farmland, according to the story.

"But who would agree to lease land to someone who just showed up?" the man said. The urbanite gave up on his dream and canceled the move.

The would-be farmer had retired from his company early and sold his Tokyo condominium for the move. The rejection "must have cut deep," the 51-year-old said.

The city's immigration and settlement promotion office, which made the four-minute aliens video, says it wants people to understand little by little the difficulty of rural life and make a move they can be satisfied with.

Thirty-two households have taken advantage of the two-step immigration program since it was launched in late August, with seven of these taking the second step of moving to smaller towns.

The Suzuki family moved to Kochi in December and found a house three months later in the town of Konan, population 33,000.

Happily settled, the husband said that they visited local real estate companies and managed to find the perfect home. "It was hard to find detailed information in Tokyo or online about vacant properties in Kochi," he said.

Living in Kochi, a moderately sized city, was a good warmup for life in a more rural area, he said.