A peek into hell, a meal in a stream and hot-spring monkeys lure long-stay visitors TOKYO -- Tourists are flocking to Japan in record numbers, with most wandering the so-called "golden route" that takes them through Tokyo and Kyoto. But those spending relatively long holidays here are also trekking to destinations somewhat off the beaten path.

Stefan Schauwecker of japan-guide.com notes that tourists are especially taken by the country's spirituality, nature and countryside. "Locations related to samurai, five-story pagodas, temples and Japanese gardens fit the image of Japan, and are thus popular," he said.

The Nikkei asked 290 tourists from the U.S. and Australia, who stayed two weeks to list their top five destinations if they come again. Their answers were somewhat surprising. Yamanouchimachi, Nagano Prefecture -- Wild Japanese macaques bathing in a hot spring during winter are an amusing sight. The spring and its simians are part of a mountain reserve in northern Nagano Prefecture. Known as snow monkeys abroad, they take to the hot spring in winter months to cope with the bitter cold. When bathing with eyes closed, the monkeys look just like humans.

9 Views of the Seto Inland Sea and Shikoku Island Hatsukaichi, Hiroshima Prefecture -- The peak on the island of Miyajima is home to Itsukushima Shrine. Established by Buddhist priest Kobo Daishi, the island has become a place of worship. From the heights of the 535-meter mountain, visitors have an expansive view of the Seto Inland Sea, Hiroshima and the mountains of Shikoku Island. In addition to a ropeway, there are three hiking routes to the summit lined with unusually shaped rocks.

8 A journey into old Japan Kyoto, Kyoto Prefecture -- This ancient temple at the foot of the mountains is one of Kyoto's must sees. Covered staircases connect shrines within the compound, which is a popular cultural attraction and includes Tahoto pagoda, Hojo-ike Pond and Mikaeri Amida Nyorai, a statute of Buddha looking over his shoulder. There are also about 3,000 Japanese maple trees in the district, which becomes a riot of color in autumn. Views of the temple at night are especially impressive.

7 The trail of a thousand gates 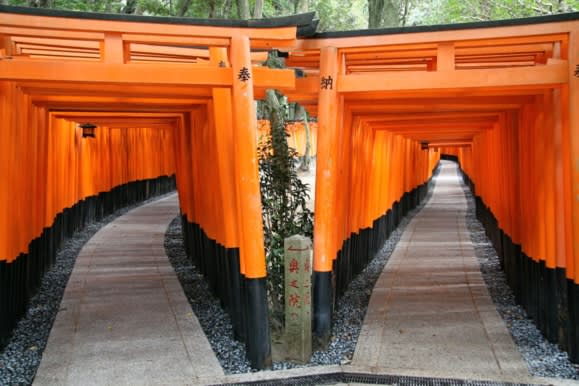 Kyoto, Kyoto Prefecture -- Of Japan's 30,000 Inari shrines, this is one of the most popular, with foreign tourists wanting to photograph the vermillion red tunnel of a thousand gates. Views of Kyoto stretch out from Yotsutsuji halfway up the side of Mount Inari. The tunnel can get crowded during the day, so early morning visits are recommended.

6 A spectacular view from the bottom of a gorge 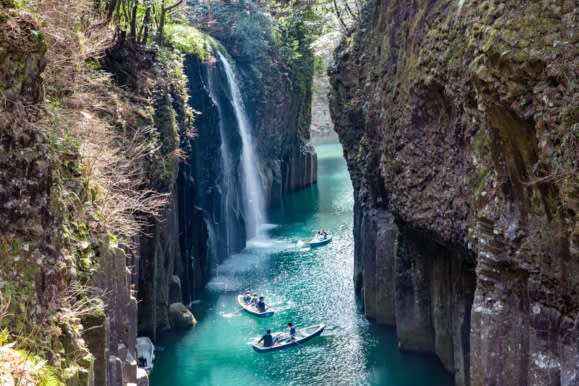 Takachihocho, Miyazaki Prefecture -- The rumblings of Mount Aso, Japan's largest active volcano, have hewn a steep V-shaped gorge, the walls of which tower some 100 meters above the Gokasegawa River at the bottom. Visitors can boat down the river or view the gorge from along a trail. A 17-meter waterfall and soaring columnar joints accent the scenery. The nearby shrine is known for the ancient Japanese myth of Amanoiwato.

5 Dining in the middle of a stream

Kyoto, Kyoto Prefecture -- Known as the "back room" of Kyoto, this idyllic suburb contains a narrow gully lined with a number of Japanese inns. The area is popular for kawadoko, or riverbed, dining in summer, with guests eating at tables set up in a stream. Kibune also boasts a famous Shinto shrine, and its colorful autumn leaves are impressive. The rural feel of this small village just outside the center of Kyoto and hiking course between Kibunejinja Shrine and Kuramadera Temple make for a pleasant visit.

4 A feel of Kyoto close by Tokyo Yokohama, Kanagawa Prefecture -- Historically significant buildings relocated from places like Kyoto and Kamakura dot a 175,000-sq.-meter garden. The buildings include 10 designated as culturally important by the government and were built by shogun military commanders. The garden is famed for its Japanese apricot trees, cherry blossoms, autumn leaves and three-story pagoda.

3 A bridge made of vines in a picture-perfect setting Miyoshi, Tokushima Prefecture -- A suspension bridge in a rarely explored part of Iya in west Tokushima Prefecture is a thrilling destination. Woven from Siberian gooseberry trees, the bridge hangs 14 meters above a river. The surroundings change with the seasons, leaves ablaze in autumn and wisteria in full bloom in spring. The bridge stays lit from 7 p.m. to 9:30 p.m. for night crossings. Alex Kerr, an American researcher who restores old Japanese rural homes, helps acquaint foreign tourists with the area. Thanks to his efforts, people are visiting other interesting sights nearby, such as Oboke Gorge.

2 A panorama with a view of Mount Fuji 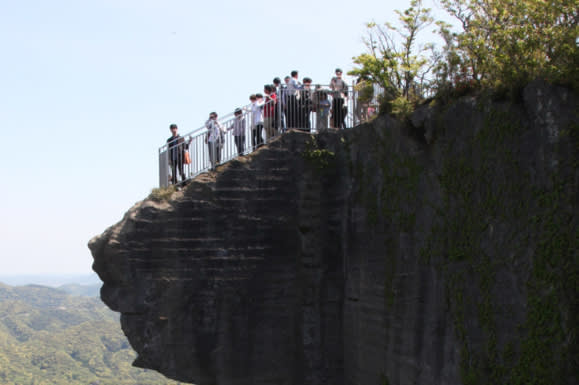 Kyonanmachi, Chiba Prefecture -- The panoramic view from the summit of Mount Nokogiri at 329 meters takes in Mount Fuji, the volcanic island of Izu Oshima and Mount Amagi. Visitors can ascend on foot, by car or via ropeway. An observatory juts out precariously from a precipice, giving what the Japanese call "a peek into hell." Previous quarrying for Boshu rock, prized as a building material, has left the mountain with steep crags and vertical cliffs. On the hillside sits Nihonji temple with its 30-meter-tall Buddha statue -- Japan's largest stone Buddha -- and over 1,500 arhats. Many visitors choose the ropeway going up then hike down.

1 A pleasant walk among cedars and monuments Koyacho, Wakayama Prefecture -- Visitors to the sacred grounds of Kobo Daishi, a Buddhist priest, first navigate a 2-km approach lined with gravestones and monuments set amid more than a thousand Japanese cedars. One visitor remarked that the small town was a pleasant respite from Japan's bustling cities, allowing one to contemplate the area's history and religion. A nearby shukubo, or temple lodging, is available for overnight stays. The lodge's operator also offers monk training sessions and night tours in English.