OSATSU, Japan -- I am sitting inside a wooden hut, a simple structure known as an amagoya, in the fishing village of Osatsu, on the east coast of the Ise Peninsula, an area of great beauty located on the southwestern coast of Japan's main island of Honshu.

I watch as the women divers, or ama, wearing white bonnets embroidered with star symbols known as seiman, turn oysters over red-hot coals. It is one of those culinary experiences that is as much about culture as food -- in this instance, an ancient marine culture.

Fear of the sea, its shifting, tempestuous moods and irascible temperament, has spawned many superstitions among those who depend on its bounty and goodwill for their livelihoods -- not least in this unique part of Japan.

The seiman, a geometric shape resembling a spiky constellation, can be drawn -- or in this case stitched -- in a continuous pattern which represents completion, a safe return to the starting point of the woman's dive -- the surface of the sea. The nine superimposed lines of the doman, a pictorial representation of a fishing net, is another visual amulet, this time a hopeful defense against menacing deep-water threats such as sharks and the hypothermia-inducing winter seas. Our lunch, chargrilled over an open hearth, is a smorgasbord of clams, scallops, sazae (turban shell), spiny lobster and oysters, served with grilled sea bream, a briny agar seaweed soup, and organic rice.

The peninsula's seafood meets the sacred on the high altar of abalone consumption and appreciation that almost amounts to gastronomic cult worship. Abundant during the months from May to September, even the deities at the Ise Grand Shrine, which is deeply linked to Japan's Imperial family, get to partake of this delicacy in an annual ritual offering. It is no coincidence that the connecting set of main and subsidiary places of worship at the Geku (the Outer Shrine) is dedicated to Toyouke O-kami, the Divinity of Abundant Food. 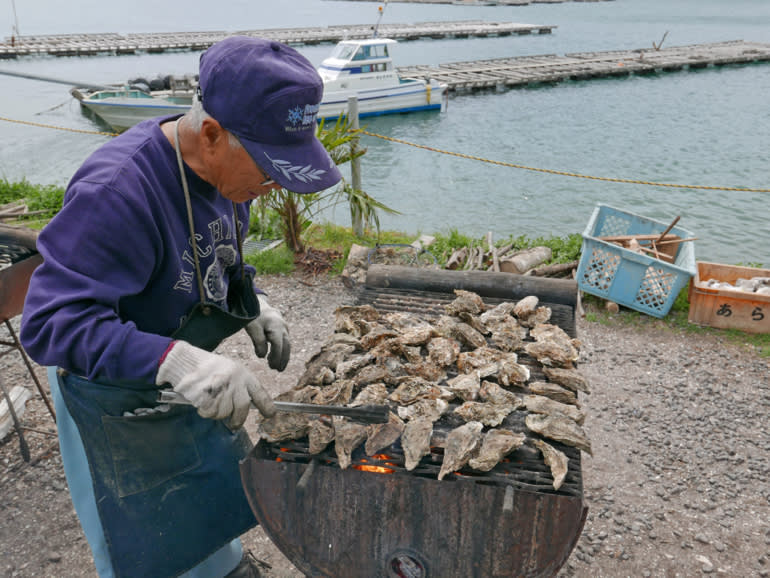 Top: An ama takes the plunge in Ise Bay. Middle: Grilling oysters at a lunch buffet restaurant off the Pearl Road. Bottom: A reimagined painting of an ama depicts marine life in heightened detail. (Stephen Mansfield)

There is a timeless quality to the Ise shoreline, one sensed in the fine alterations of light, as its waters change from the muted hues of a shrine mirror to deep aquamarine. The marine connection with the peninsula, also known as Ise-Shima Peninsula, is reinforced in a unique museum just south of the bayside town of Toba. Occupying a set of stunning modern buildings, the Toba Sea-Folk Museum explores the relationship between the region's inhabitants and the sea in exhibits tracing the traditions, superstitions, festivals and working methods of fishermen. Arguably, the most impressive building in the complex is the Repository of Wooden Boats, with its vast collection of original vessels from both Japan and other Asian countries.

The museum's remarkably realistic fish models are a good introduction to the species inhabiting the surrounding waters here. But for a genuine sampling of Ise cuisine, visitors need to go to locally endorsed restaurants. Some are on the Pearl Road, a twisting country route offering glimpses of tiny bays and ageless fishing villages, which might just as well be called the Oyster Road, at least during the late autumn and winter season. Signboards point to roadside eateries and timber huts, advertising "Oysters: All You Can Eat!" Piles of oyster shells can be seen along restaurant peripheries or beside car parks or surrounding sacred rocks in the precincts of local shrines.

For the ultimate in fresh fish servings, however, Hanaya, an eatery in Kashikojima in the peninsula's south, is hard to beat. Like provincial French restaurants, the menu is handwritten every day, the dishes changing according to available catches. Numbers are scribbled next to dishes on the menu, indicating how many servings are available at any given time. The restaurant, which doubles as an inn, has seen a decline in customers since COVID-19 appeared in Japan last year, although the periodic lifting of states of emergency and public holidays like Golden Week in the spring have helped to partially restore profits. 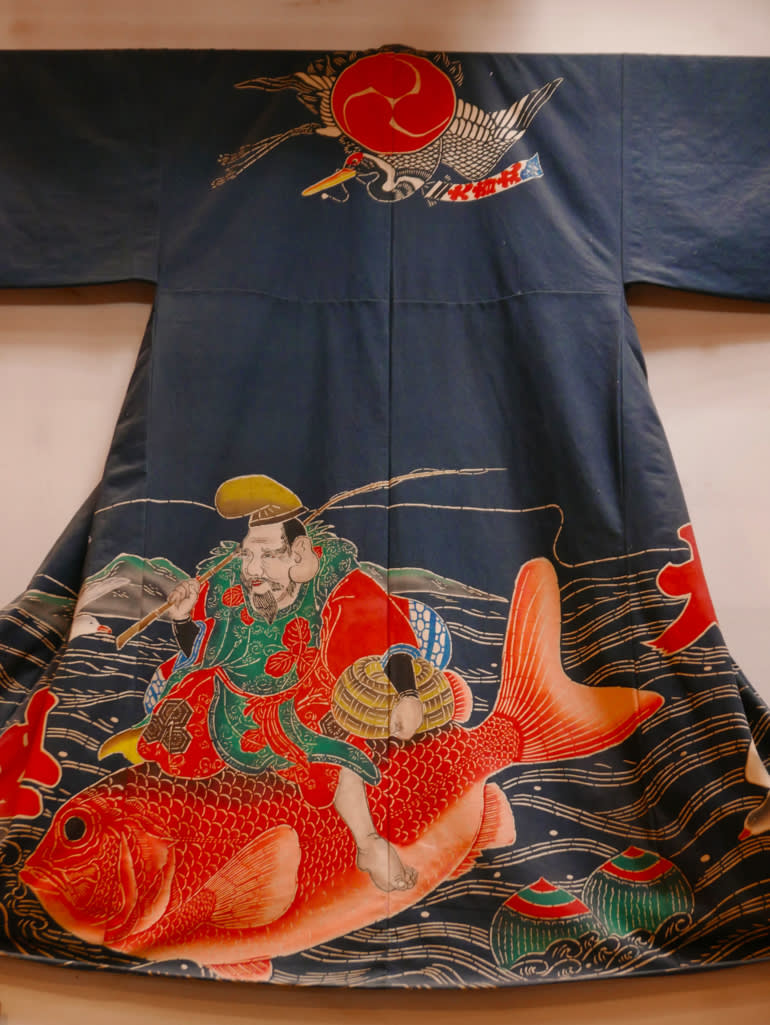 Top: One of the buildings at the Toba Sea-Folk Museum replicates a fish-drying shed. Middle: The museum has an impressive collection of fishing boats. Bottom: This kimono at the museum depicts Ebisu, god of commerce and patron of fishermen. (Stephen Mansfield)

Although fish consumption in Japan has shown signs of recovery during the pandemic period as more people stayed at home, public demand for meat overtook that of fish a decade ago, a gap that has been widening. This shift is partly explained by the lengthier preparation process required in cooking with seafood. Falling demand also reflects diminishing fish stocks caused by overfishing and rising sea temperatures.

Fishing has always been a more precarious undertaking than farming. The danger of working at sea, combined with the economic uncertainty of unpredictable catches and falling incomes, explains the existence of small seaside shrines clinging to the cliffs of the peninsula. One thing that any amount of petitioning to the gods cannot change, however, is the inexorable migration of young people to urban areas. The depletion of an energetic work force, combined with a steadily aging population, spells an uncertain future for marine-related occupations in the area.

There are exceptions to the exodus, as the case of 41-year-old Aiko Ono illustrates. A trained photographer, Ono relocated to the Ijika district of Toba and became an ama, joining a group that includes women in their 80s. The move was not as improbable as it might seem since Ono is a keen diver. After a day's diving for abalone, seaweed and turban shells, Ono and her team of women go to a kamado, a simple hut with a wood-burning fire, where the divers warm up. These are also the places where younger women can learn from their more experienced elders how to cultivate a respect for the sea, while formulating modern diving methods and business models. 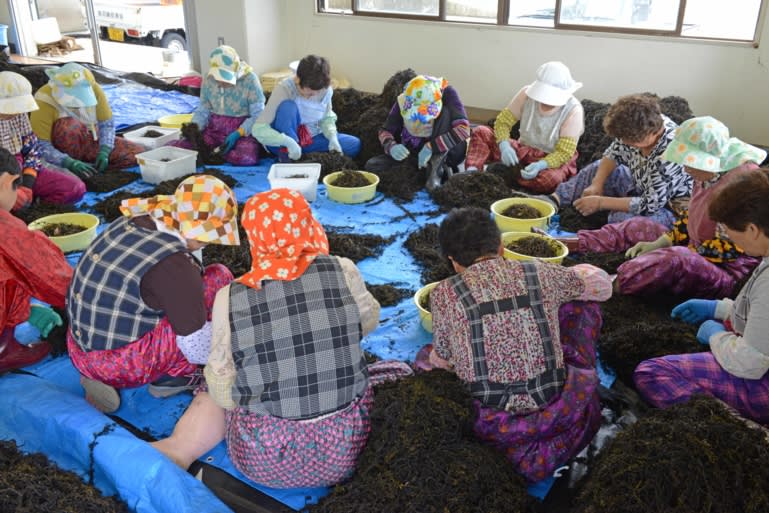 Top: Oyster shells often appear in shrine displays like this on the Ise Peninsula. Middle: Nets of seaweed hang out to dry along the peninsula’s picturesque Pearl Road. Bottom: Sorting seaweed at a women’s collective in the fishing port of Arashima. (Stephen Mansfield)

In an example of using contemporary technology, another ama, 38-year-old Megumi Kodera, who is based on the tiny island of Sugashima, has turned to online shopping applications to sell her seaweed products.

Men may sail out to the open seas to catch fish, but much of the managing of Ise's marine culture seems to be conducted by women as they can be seen sorting, cutting and hanging great hanks of kelp. Meanwhile, female divers plunge to astonishing depths, while elderly women can be seen carrying bundles of arame, a local seaweed, along woodland tracks to fishing ports after cutting the plants from rocks.

At the amagoya, the women are busily engaged in preparing and serving food. Besides oysters, a feature of any visit is the optional side treats that include the prized and suitably expensive Ise ebi, a local shrimp. Bottles of ponzu, a citrus-based soy sauce, sit on the tables, often alongside tiny servings of yuzukosho, a mix of yuzu citrus peel and chili peppers which goes particularly well with oysters. 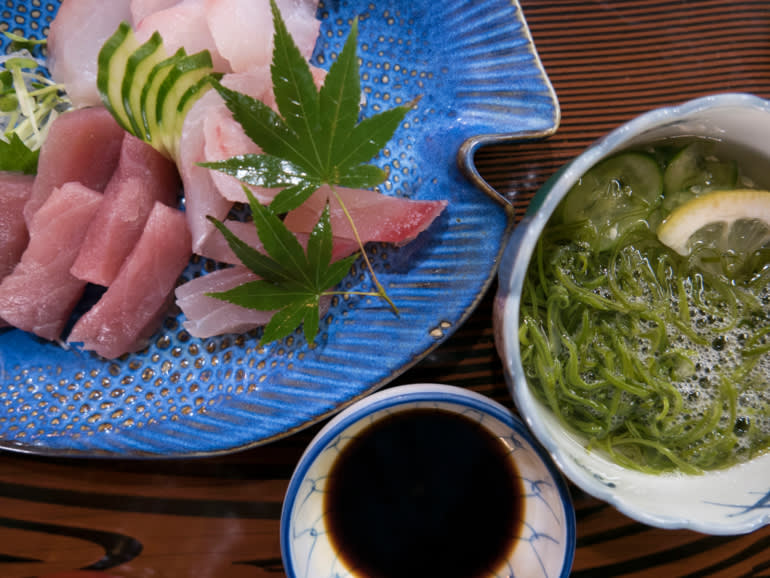 Top: Serving a truly fresh fish set at Hanaya, a sea-facing restaurant in Kashikojima. Bottom: Fruits of the sea at a local Ise restaurant. (Stephen Mansfield)

The ama at these rough-and-ready cantinas not only dive for our lunch, they also prepare the oysters by scraping off exogenous matter from the shells, a process not unlike caulking the underside of a fishing boat. Care is needed in grilling the sharper shells. Ama routinely wear white gloves, arming themselves with tongs and oyster shuckers. While cooking, the oysters can burst open, spitting boiling, briny water. It is a delicate business, involving good timing, as the oysters can easily burn if the seawater in the shell evaporates too quickly.

As we consume our generous, multicourse servings, the ama relate anecdotes of sea life. Their accounts touch on fishing techniques, the risks involved in diving, superstitions and beliefs, and thoughts on the embattled state of marine biology in the area. They also recount how oysters were once, and perhaps still are in some quarters, regarded as powerful aphrodisiacs. And that oysters have eyes, a fact I would prefer not to know.

Further evidence that the local marine culture is firmly in the custody of women is the annual spring visit by Osatsu's ama to the nearby Ishigami-san Shrine to venerate the sea gods and appeal to them for bountiful catches and protection from marine perils. It may be that the waters in these parts benefit best under the supervision of women. In "Deep," James Nestor's book on the power and mystery of the oceans, an ama tells him, "When a man comes to the ocean, he exploits it and strips it. When a woman puts her hands in the ocean, that balance is restored."