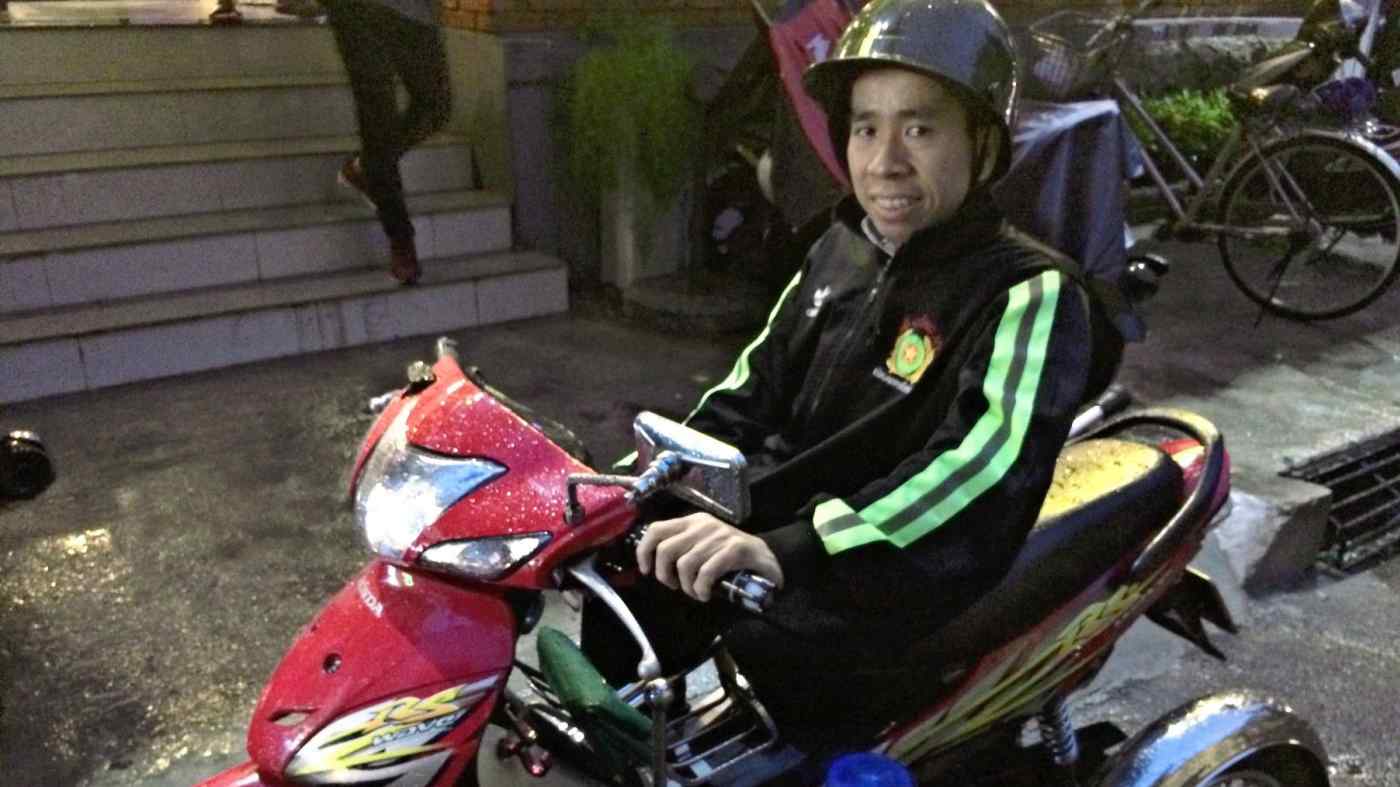 Duc Nguyen has no problem getting around on a motorized tricycle.
ATSUSHI TOMIYAMA, Nikkei staff writerJune 10, 2018 20:57 JST | Vietnam
CopyCopied

HO CHI MINH CITY -- Forty-three years after the end of the Vietnam War, many Vietnamese appear to have put the tragedy behind them as the country continues to ride a wave of economic growth in Southeast Asia.

But some can never forget.

Among those for whom Vietnam's bloody conflict with the U.S. is an ever-present reality are people born with birth defects tied to their parents' exposure to Agent Orange, a toxic defoliant used by the U.S. military during the war.

The U.S. military is estimated to have sprayed over 80 million liters of Agent Orange between 1961 and 1971 in south-central Vietnam in an effort to remove the dense forest cover used by Vietnamese guerrillas. The government in Hanoi defeated the U.S.-backed government of South Vietnam in 1975, reunifying the country.

According to a local newspaper report, the toxic chemical has affected 4.8 million people and contributes to birth defects to this day. The U.S. government has carried out cleanup efforts, but has not paid direct compensation to those exposed to Agent Orange.

Two, Duc Nguyen, a separated conjoined twin, and Le Minh Chau, an artist who paints with his mouth because he lacks the use of his limbs, have risen above adversity to achieve much in life.

Viet and Duc Nguyen, conjoined twin brothers, became a symbol of the ravages of the Vietnam War after their photos were widely published. They are especially well known in Japan. Born in 1981, the brothers were separated by Japanese doctors in 1988.

Viet died in 2007 as a result of complications following the surgery. Duc, now 37, is in good health and lives in Ho Chi Minh City.

"Konnichiwa, yoroshiku onegai shimasu," ("Hello, nice to meet you,") Duc said in Japanese at the start of his interview. He gets around on a motorized tricycle and walks with a crutch on one leg. He said he can basically go anywhere. 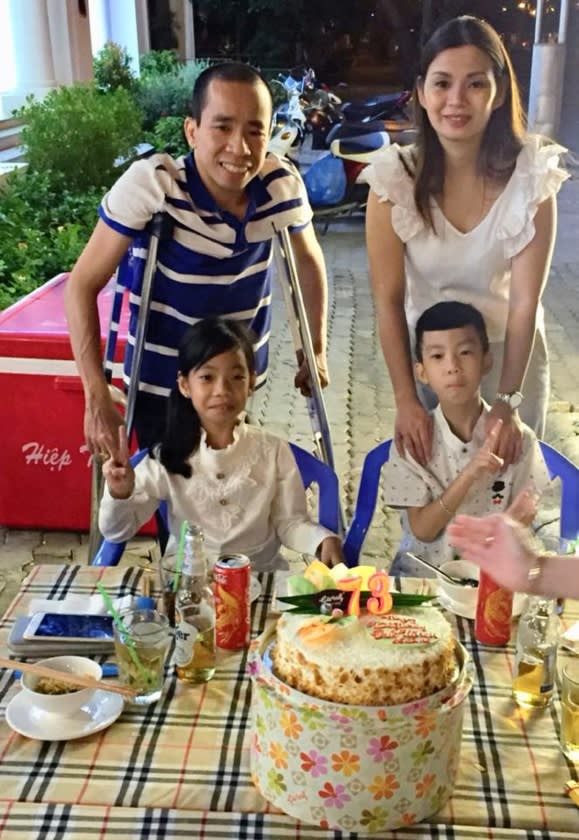 Duc, standing, left, poses with his wife and his twin children.

Duc met his wife Thanh Tuyen while doing volunteer work and the two married in 2006. Three years later they had twins, a boy, Phu Si, and a girl, Anh Dao. Their names, "Mount Fuji" and "cherry blossom" in Vietnamese, highlight Duc's connection to Japan. They are an expression of gratitude to the Japanese people who supported Duc and his brother before and after their surgery.

Duc has worked at a hospital in Ho Chi Minh City where people suffering from Agent Orange exposure receive treatment. Last year, he underwent six surgeries to treat kidney and urinary tract ailments, which left him bedridden for much of the year, but he is now in good health.

In July, Duc will come to Japan's Hiroshima International University as a visiting professor.

This year marks the 30th anniversary of Duc and Viet's separation surgery. Recalling the time just before the operation, Duc said he had mixed feelings. On the one hand, he was filled with joy and anticipation at the thought of being free to move around on his own. On the other, he felt sad about being separated from Viet.

To this day, Duc feels Viet sacrificed himself for his brother. That gave him the sense that he had to live a positive life, especially because Viet did not have the chance to enjoy his life to the fullest.

Duc says he does not feel enmity toward Americans, and that war is what made him and Viet the way they were. But he added he would be happy if Americans were aware how he overcame his difficulties with grit and now lives a normal life. His dream for the future is a simple one: to live a long life and to continue to watch his children grow. Despite his positive attitude, his health challenges do not seem so easy to overcome. Born with without the use of his limbs, artist Le Minh Chau paints with his mouth.

Le Minh Chau, 26, was born in the southern province of Dong Nai on Aug. 10, 1991, 30 years to the day after the U.S. military began spraying Agent Orange in Vietnam. Chau's deformity is attributed to contaminated water that his mother drank from a well.

Chau's arms are only around 5cm in diameter, and he cannot move his hands well. His legs are deformed and he walks with difficulty. From the time he was 6 months old until he was 12, Chau was separated from his parents while he underwent treatment in Germany and Ho Chi Minh City.

Chau took up painting at age 9, using his unruly hands and normally functioning mouth to hold the brush. At 14 he was nearly forced to give up his passion after he injured his dominant left hand playing soccer. But Chau learned to hold the brush using only his mouth. He eventually became an artist, winning a following with his unusual technique.

Chau is mostly self-taught, having learned from art websites and books. His work is characterized by a delicate touch. According to the artist, many other painters who use their mouths hold the brush tightly between their teeth. But Chau paints with light strokes, holding the brush gently and manipulating it with his tongue.

He has painted over 2,000 pictures in styles varying from photo-realistic and landscape to impressionist. He lives alone, supporting himself on income he earns from teaching and selling his works, which go for $500 to $3,000 apiece.

Chau, who featured in a documentary that was nominated for an Academy Award in 2016, is now known internationally. Earlier in his life, however, he struggled with depression, contemplating suicide seven times.

In one instance, he actually climbed to the roof of a high-rise building in Ho Chi Minh City and nearly jumped off. But in that moment he was awe-struck by the bird's-eye view of the city and its changing face as a result of Vietnam's rapid economic growth. This inspired the thought that he could change his life in the same way.

Chau's next goal is to become a fashion designer. His first creations will be unveiled at a competition New York in 2019. He also dreams of starting his own fashion label.