Just a fad? Even Starbucks has put the item on its menu NEW YORK -- It was a line of customers snaking into Sushirrito, a year-old restaurant in New York's Flatiron District, that first caught Shireen's attention. In a city packed with restaurants, long lines signal something worth waiting for. In this case, it turned out to be a dish that to Shireen sounded "interesting and unique": sushi burritos -- big, uncut rolls of sushi.

Shireen joined the line along with her friend Zareen, who had previously eaten at a Sushirrito restaurant in Palo Alto, California. The rolls were good, she said, but she was more excited about the chain's efficiency. "They sped through the line," she said. "People want to eat fast -- get in and get out."

Despite its streamlined operations and no-frills atmosphere, Sushirrito is not a fast food joint. Customers pay between $8 and $14 for each roll, which weighs a little under half a kilogram and, except for the rice and seaweed exterior, bears little resemblance to its sushi namesake. While a few are made with raw fish, most center around cooked proteins in the style of other Japanese dishes. 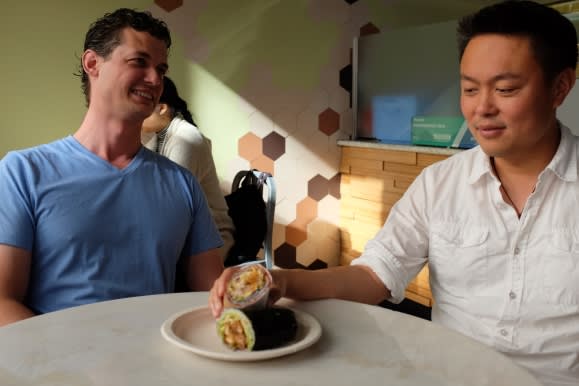 For example, the Sumo Crunch pairs shrimp tempura with ginger guacamole and Sriracha aioli (Sriracha is a spicy chili sauce originating in Thailand), and the Karaage brings together Japanese fried chicken and green cabbage. Soy sauce and wasabi are conspicuously absent.

"Americans over-rely on soy sauce. It's a generic flavor and it gets messy," said chef and cofounder Ty Mahler.

Sushirrito founder Peter Yen came up with the concept in 2004, when he was working at a private equity firm in San Francisco. "Everything was starting to become fast-casual. Chipotle was in its heyday," Yen said, referring to a chain of inexpensive restaurants serving Mexican cuisine. "But when you got sushi, it was still either the pre-made grocery store stuff or pricier higher-end. Why wasn't there a fast-casual sushi concept?"

The biggest obstacle, he said, was production. Sushi rolls, which are skinny and require cutting, cannot be churned out fast enough to feed hungry lunchtime crowds. But rolling together a burrito takes only a minute. If tortilla is replaced with nori (Japanese dried seaweed) and white sushi rice, sushi can be served with the same efficiency as Chipotle burritos. Yen trademarked the "sushirrito" term, put an ad on Craigslist seeking a chef-partner, found Mahler, and opened the restaurant in downtown San Francisco.

Since its launch in 2011, Sushirrito has opened eight branches in San Francisco and New York and sold more than two million sushirritos. The pace has recently increased, with three new stores opening in the past 12 months. When the Flatiron restaurant gave away free rolls to celebrate its first anniversary in New York, the line stretched for several blocks, with eager diners waiting as long as two hours.

Los Angeles is a potential next stop, and the company is also eying overseas outlets and considering approaches from would-be franchisees, though its managers feel reluctant to cede control over store operations. "This is a very hands-on business," Mahler said.

While Sushirrito's trademarked rolls can be found only in San Francisco and New York, the company's success on social media and food blogs has triggered a wave of imitators, with entrepreneurs rushing to create their own sushi burritos. Wabi Sabi in Fort Collins, Colorado, added a sushi burrito to its menu after staff spotted it on social media.

"You see them all over the internet," Wabi Sabi head chef Micki Hudson said in a local newspaper last year.

Even Starbucks has gotten in on the trend. In August, selected U.S. stores began offering "chicken maki rolls," with rice and nori wrapped around a mix of shredded chicken, cucumber and avocado.

The combination's novelty is undoubtedly a factor in its success, following in the footsteps of other trendy mashups such as the cronut (a combination croissant and doughnut) and the ramen burger (a pattie sandwiched between two cakes of instant noodles).

Its portability also appeals to U.S. consumers, who frequently eat on the go: 17% order food to take away once a week, and another 19% order takeout several times per month. At Pokeworks, a Hawaiian-inspired chain, diners can order a raw fish dish called poke in the form of bowls, salads, or sushi burritos. A quarter of customers opt for the burrito, according to co-founder Mike Wu.

Another reason for the sushi burrito's success may be that the words sushi and burrito have become integral parts of the culinary vocabulary of U.S. consumers. At New York's Uma Temakeria, the owners initially struggled to explain the concept of sushi handrolls, or temaki, to customers. But after they added more rice to the rolls and sold them as "sushi burritos," they went viral on Instagram.

"In Brazil, temaki are really popular as a next-generation fast food which is a bit healthier. We wanted to bring that to the U.S.," said Cynthia Kueppers, who opened Uma Temakeria in 2013 with partner Chris Jaeckle, owner and chef at all'onda, a local Italian restaurant. "But when we first launched in New York, we struggled with getting people to understand what temaki were. Then we launched a sushi burrito in 2015 and people suddenly understood." The restaurant has two locations, both in food halls, and sells 800 burritos a day through Uber Eats, a delivery service. Its products can also be found at music festivals, where typical sales are close to 1,000 a day.

Kueppers is optimistic that the sushi burrito is more than just a novel trend. "It's here to stay," she said. "People are looking for healthier options, but they don't want to give up convenience or deliciousness. This is half the calories of a Mexican burrito."

However, some analysts disagree. Lizzy Freier, a managing editor at Technomic, a foodservice consultancy, pointed to the cronut as an example of where the sushirrito might be headed. After the pastry gained fame in 2013, it lingered on some chain menus as a limited offer, but never became a permanent item.

"They have stirred a lot of hype, but chains haven't really picked them up to the extent of an ingredient like Sriracha, which is now on top chain restaurant menus," she said. "Many of these mashups are created to stir up hype and interest, get younger folks in the door, be Instagrammable and garner attention for the restaurant. They're not intended to stay on menus forever. I think sushi burritos [will] have a similar fate."