Why tiny buildings are big in Japan

Small structures are an integral part of the urban fabric TOKYO -- Mother always said, "You can never be too rich or too thin -- or have too much kitchen-counter or closet space." She also advised, "Be ambitious. Think big!" Mother was wrong.

Just ask the property owners, architects and inventive construction managers in Tokyo and other Japanese cities who, over the years, have concocted some of the most unusual -- and intriguing -- structures to be found anywhere in the world.

Anyone who has visited Japan surely has stumbled upon them -- tiny houses, office buildings or mixed-use confections incorporating ground-floor shops that pop up on lots the size of ping-pong tables. In many American or European cities, such seemingly dead urban spaces would more likely be outfitted with benches or decorative flower boxes, or scooped up by developers eager to acquire rows of contiguous properties -- the better for creating large surface areas on which to erect big commercial or residential edifices.

The looks, shapes and placement of Japan's Lilliputian structures -- a postmodernist ziggurat here; a poured-concrete dollop there; or a two-story sliver as narrow as a single door -- tend to be determined by various factors that are distinctly Japanese.

Chief among these is Japan's zoning code, which controls the forms, uses and physical locations of buildings in towns and cities. Unlike similar restrictions in many other countries, this code is set at the national level, although it may be tweaked at the municipal level to suit particular needs. For instance, Kyoto limits building heights in an effort to protect its "historical townscape." 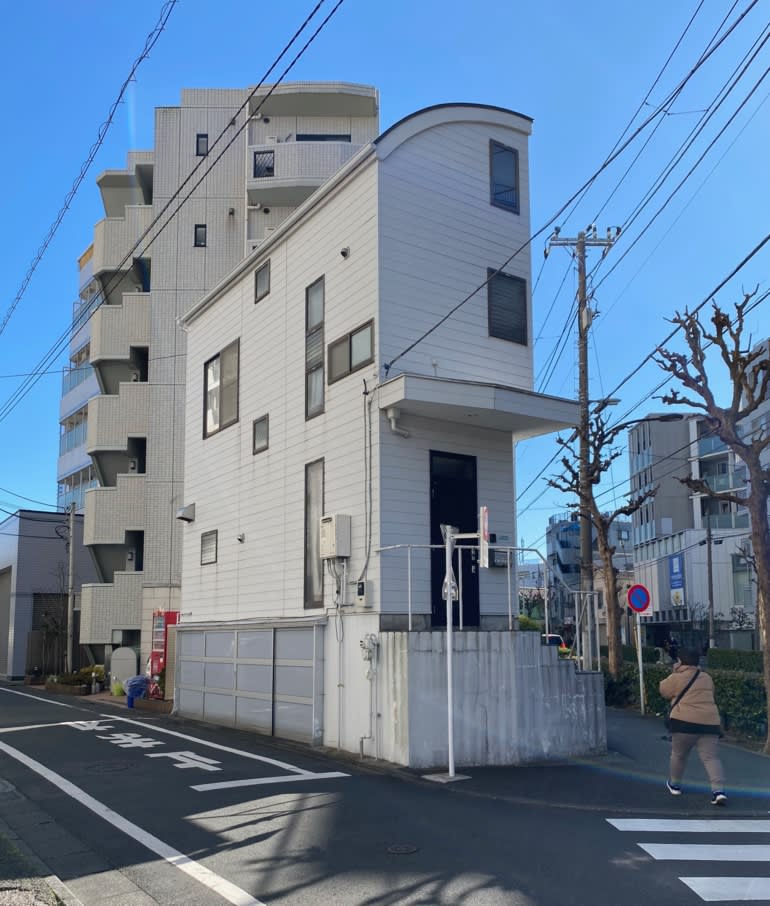 Overall, Japan's zoning code, which describes different kinds of districts that may be created in cities, from primarily residential to all-industrial zones, is more inclusive than exclusive, often allowing for structures with diverse uses to coexist within designated areas. By contrast, zoning in the U.S., especially for residential districts, is notoriously exclusive and can effectively price whole groups of people out of certain areas.

In Japan, as long as a building type is permitted in a particular kind of district, and its size, design and construction conform to the guidelines for its zone, then almost anything goes, and there is no need for the often contentious and protracted approval-seeking discussions with community boards that slow down or even kill real estate developers' plans in many American cities.

But why are Japan's teeny buildings so unfathomably small? In a recent chat, Roland Hagenberg helped answer that question. A Kyoto-based photographer and journalist specializing in Japanese modern architecture, Hagenberg is an Austrian who has lived in Japan for three decades. His "20 Japanese Architects," an essential collection of informative interviews, was issued in a bilingual English-Chinese edition by Taiwan's Garden City Publishers in 2009. A narrow building under construction next to Gakugei-daigaku Station in southwestern Tokyo. (Photo by Edward M. Gomez)

Hagenberg observed, "In Japan, the land on which a house or building sits is generally much more valuable than any structure itself; even buildings that foreigners might esteem for their architectural merits will readily be demolished and replaced with something newer and, for developers, potentially more lucrative."

He added, "Houses are torn down and replaced all the time. Because inheritance taxes are high, often the family members who collectively inherit a property may sell off all but a small piece of an inherited lot. Whoever ends up owning that little piece may decide to develop it by putting up a small house or other building."

Such diminutive patches of earth often turn out to be the corners or ends of irregularly shaped lots. Many are wedge-shaped and lie at the tapered ends of city blocks, where several streets intersect. Urban-history buffs might assume that the many narrow, pie-slice buildings that appear at such junctions are the results of the dictates of some grand and purposeful but ultimately incomprehensible street-layout scheme. 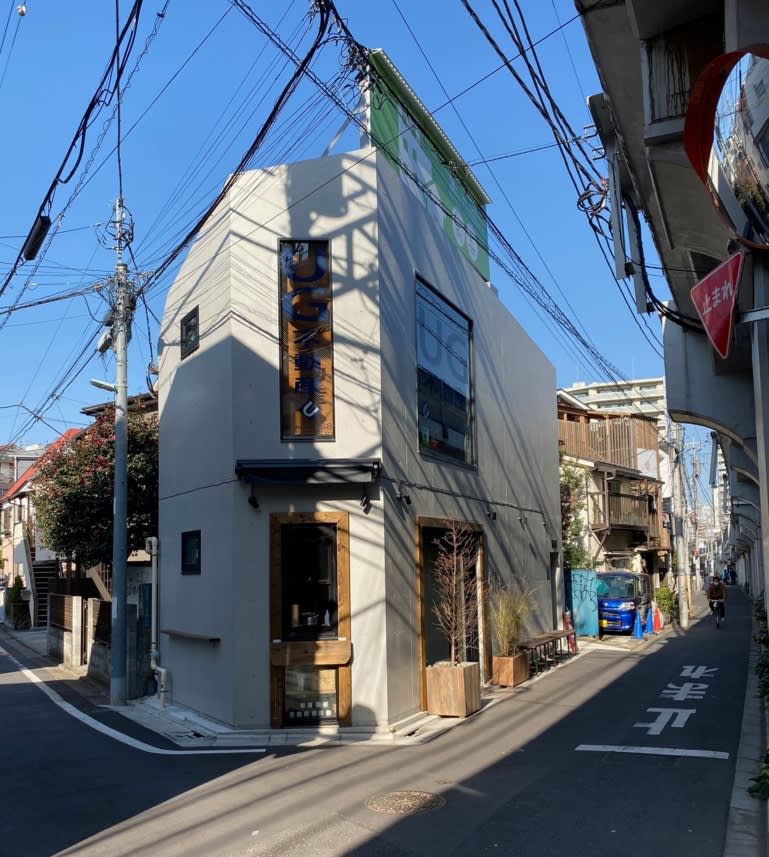 Roughly 20 meters square, this tiny lot next to the elevated tracks leading into Nakameguro Station, in Tokyo’s Meguro Ward, became the home of a commercial building. The poured-concrete structure houses a ground-floor restaurant and a second-floor office. (Photos by Edward M. Gomez)

Tokyo's leaders did draw up an ambitious, European-style plan for Japan's capital during the Meiji era (1868-1912), as the historian Eiko Imahashi points out in her book "Itoshi Yokei: Nihonjin no Pari" ("Yearning for an Extraordinary Capital: The Paris of the Japanese," first published in 1993 by Kashiwashobo).

This plan, inspired by Baron Georges-Eugene Haussmann's renovation of Paris for France's Emperor Napoleon III in the mid-1800s, could have resulted in the creation of numerous, nonrectangular city blocks of the kind that emerged after the baron finished slicing up Paris with his grands boulevards. But it was never realized, leaving Tokyo's urban layout to develop quirkily enough on its own.

Unlike European or North American cities, in which, historically, streets had primacy, and, over time, became lined with buildings, Japanese urban environments evolved out of the patchwork-like organization of land associated with rice paddies. In this spatial system, parcels of land that eventually became populated with buildings had primacy, and streets emerged to demarcate and link them. A narrow, two-story house next to elevated train tracks in Tokyo’s Meguro Ward offers a fine example of the tiny-building phenomenon. (Photo by Edward M. Gomez)

Today, compact, quizzical flights of creative-design fancy may be found tucked away in Tokyo's warrens of cozy lanes and side streets. Take, for example, a two-story building erected next to Nakameguro Station's elevated tracks, in Meguro Ward, which opened several months ago. One day, before it materialized, I came across its five-sided, roughly 20-sq.-meter lot, empty and ready for construction. A few weeks later, it boasted a chunky-svelte, poured-concrete monument to space-exploiting ingenuity, with a ground-floor restaurant and an office upstairs.

More recently, also in Meguro Ward, I discovered a new wedge-shaped house with a sleek exterior of gleaming, deep-blue glass. On a larger scale, this construction detail would look at home in a high-rise commercial building in Berlin, Frankfurt or Minneapolis.

Hagenberg noted, "Some of Japan's best-known modern architects, such as Hiroshi Hara, who is known for such large-scale projects as Kyoto Station, have told me that designing a tiny house can be very challenging -- and satisfying. Lessons learned in the handling of materials, space and light in such projects can be transferred to much larger ones." Top: The front facade of a newly constructed house in Tokyo’s Meguro Ward. Bottom: The front door can be accessed from both sides of the structure’s sharp, street-facing corner. (Photos by Edward M. Gomez)

In recent years, in the village of Raiding, south of Vienna, Hagenberg invited Hara and the Japanese architect Terunobu Fujimori to design small houses with interior areas of 25 sq. meters for use by visiting artists and other guests. There, Fujimori's thatched-roof Stork House makes clever use of a limited range of building materials.

In 2010, the German film director Wim Wenders produced "If Buildings Could Talk," a short, 3D film in which his camera glides through the undulating interior of the Rolex Learning Center in Lausanne, Switzerland. Resembling a long, languid flying saucer, this library on the campus of the Ecole Polytechnique Federale de Lausanne was designed by Kazuyo Sejima and Ryue Nishizawa of the Japanese firm SANAA. With its own voice, their architectural creation narrates Wenders' film, commenting on the visitors who study, converse, dine and laugh within its luxuriously luminous spaces. The architect Terunobu Fujimori’s Stork House has brought a taste of the Japanese tiny-building phenomenon to Raiding, a village in eastern Austria, south of Vienna, that is the composer Franz Liszt’s birthplace. (Photo by Roland Hagenberg)

In his remarks about the film, Wenders noted that buildings "do speak to us" and that they "have messages" for their occupants.

Certainly, as they turn on their charm, Japan's tiniest structures seem to woo passersby; what a pity it is that most will never be able to enter these unusual monuments to space-saving efficiency and whimsy, which, in a teasing whisper, seem to be saying, "Go ahead. Think small. After all, small is beautiful."