Diego Maradona, one of soccer's greatest, dies at 60 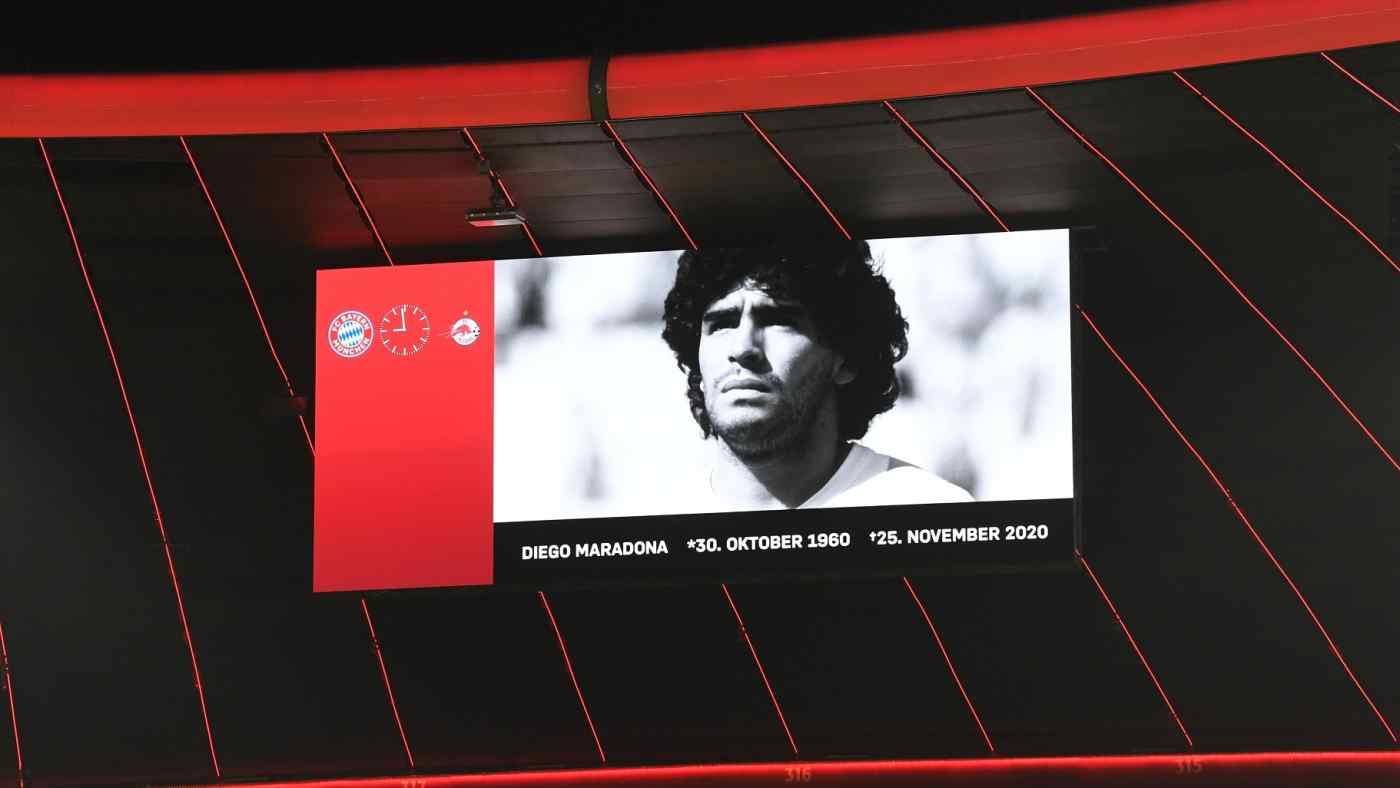 An image of Diego Maradona is displayed on a screen during a minute of silence in his memory before a match between Bayern Munich and FC Salzburg at the Allianz Arena in Munich, Germany.   © Reuters
WAJAHAT KHAN, Nikkei staff writerNovember 26, 2020 08:54 JST | Latin America
CopyCopied

NEW YORK -- Diego Maradona, arguably the finest soccer player of his generation, died Wednesday of a heart attack at his home in Tigre, on the outskirts of Buenos Aires. He was 60.

The former Argentine midfielder is most remembered for dominating the 1980s, when he single-handedly led his country to win the World Cup in 1986 and reach the final in 1990.

But the 1990s saw his career and then his personal life marred by substance abuse. He was kicked out of the 1994 World Cup for using performance-enhancing drugs. After he retired, health and legal problems followed. Despite various unsuccessful stints at coaching, the "Pibe de Oro," or "Golden Boy,'' remained a large global presence, retaining an army of admirers in Asia.

Here are some of the greatest moments of his colorful career and controversial retirement, including in Asia -- where he never wore any local colors but often visited and did manage the United Arab Emirates' Al Fujairah club for about a year, starting in 2017. 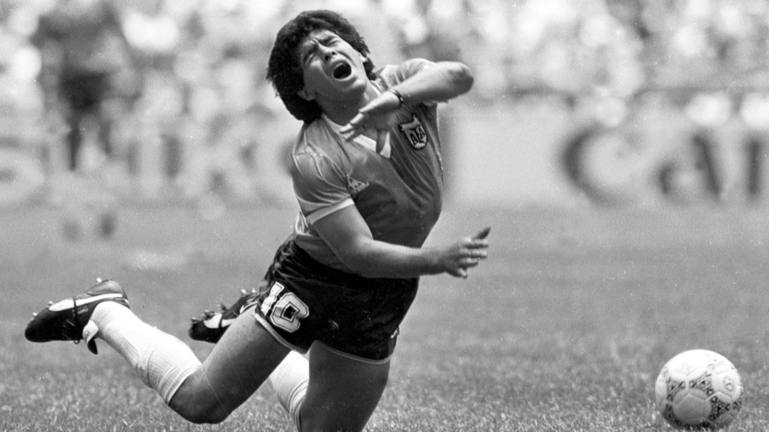 Maradona falls to the pitch after being tripped up in the World Cup quarterfinal against England in Mexico City in 1986. Maradona scored both goals in Argentina's 2-1 victory.   © Reuters 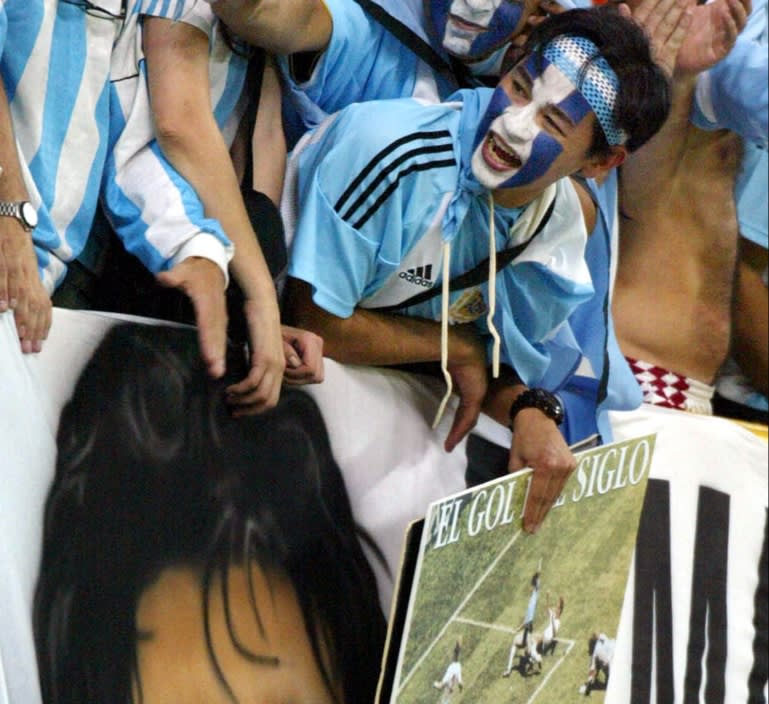 Argentina fans, one holding a poster of Maradona, wait for the start of the Group F match at the World Cup finals between England and Argentina in Sapporo in 2002.   © Reuters A South Korean man, right, is greeted by a man controlling a Maradona puppet during filming for a Mexican television station in Seoul in 2002. South Korea co-hosted the World Cup finals that year.   © Reuters 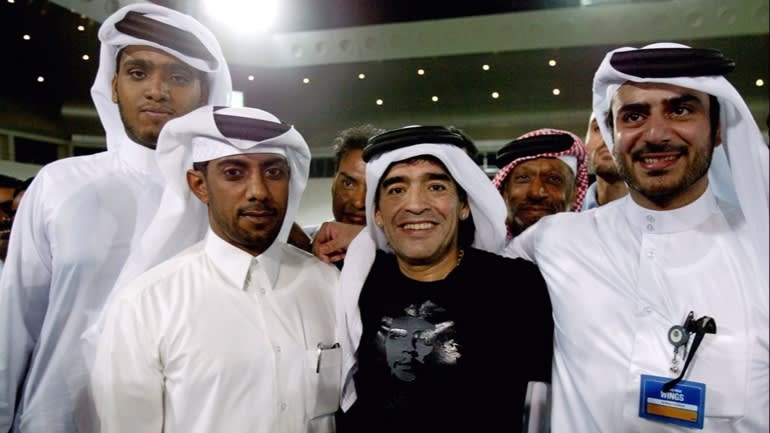 Maradona, center, poses with Qatar fans while visiting the Alsadd Club in Doha in 2005.   © Reuters Maradona kicks the ball at a soccer clinic with students in Kadambagachi, a village in India's West Bengal, in 2017.   © Reuters 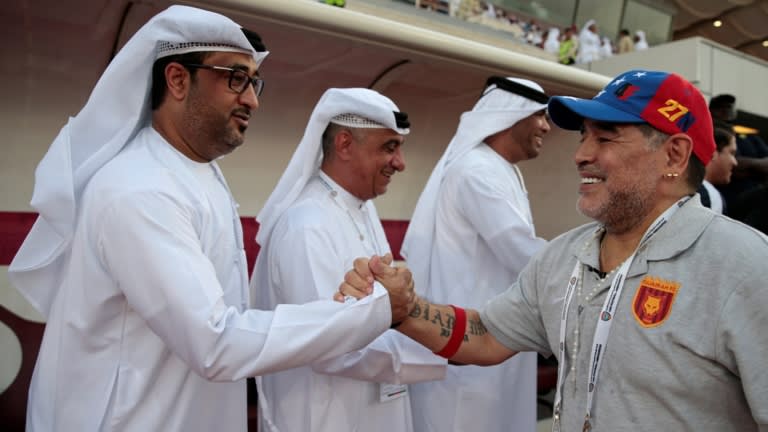 Maradona, then managing the United Arab Emirates' Al Fujairah club, greets officials of the opposing team ahead of a 2018 match in the UAE.   © Reuters
CopyCopied