Hall of Fame baseball star Hank Aaron, among the greatest players in history, died at the age of 86 on Jan. 22. Here he is shown in a portrait at the Polo Grounds in Brooklyn before the start of the 1954 season.   © AP
ROBERT WHITING, Contributing writerJanuary 25, 2021 13:00 JST | Japan
CopyCopied

TOKYO -- The American sports world lost a legend on Friday when Hank Aaron, the Hall of Fame baseball star, died at age 86. Aaron won many different batting titles during the course of his 23-year major league career and held many MLB batting records, but by far his most famous achievement was hitting 755 career home runs, surpassing the previous lifetime total of 714 held by the legendary Babe Ruth.

It was the most celebrated record in all of sports and Aaron would hold it for more than 30 years, before being overtaken by Barry Bonds, who finished with 762 but who also played under a cloud of suspicion that he had used performance-enhancing drugs.

Aaron, who came from a poor Black family in Alabama, joined the Milwaukee Braves in 1954 -- seven years after Jackie Robinson broke the color line in big league baseball -- and played for the Braves franchise for the next 21 years, the team moving to Atlanta in 1966. He won his first batting title in 1956 with a batting average of .328 and was chosen the National League's Most Valuable Player in 1957, when he led the Braves to a world championship. That year, he also won his first home run crown with 44. He was voted to the all-star team 21 times.

Aaron's life was marked by racism. As a boy, his mother hid him under the bed if the Ku Klux Klan marched down the street. Early in his career, Aaron and his Black teammates were often barred from hotels in the Deep South where his non-Black teammates were staying. As Aaron neared Ruth's record and began to receive more national attention, including a million-dollar endorsement deal with TV manufacturer Magnavox, he also started getting racist mail containing death threats from people who did not want a Black man to break Ruth's sacred mark. The letters were so alarming that he needed an FBI detail to protect him and his family. The Braves front office was even compelled to hire two Atlanta police officers to sit in the stands behind Aaron's outfield position to watch for trouble.

Aaron believed he would be assassinated, but finally hit No. 715 on April 8, 1974 in Atlanta in a game versus the Los Angeles Dodgers that was broadcast live nationwide. An 11-minute ovation followed and he was showered with accolades. But the abuse continued. Aaron complained in his memoir, "I Had a Hammer" -- a tribute to his nickname "Hammering Hank Aaron" -- of being verbally abused and "racially ravaged" in his own park.

"I thought I had earned the right to be treated like a human being ... it seemed that the only thing that mattered [in Atlanta] about the home run record was that a nigger was about to step out of line and break it."

After retiring as a player, Aaron was given a well-paying job as a vice president in the Braves' front office. But he complained that he was never asked to be the manager. Frank Robinson became the first Black MLB manager in 1975 when he was hired to run the Cleveland Indians. Since then there have only been 15 others.

Aaron developed a special relationship with Sadaharu Oh as the Japanese star chased Aaron's home run record. The two men faced off in a home run derby in Tokyo on Nov. 4, 1974 before a Yomiuri Giants-New York Mets exhibition game at Korakuen Stadium during the Mets' goodwill tour. The event was sponsored by CBS News and broadcast to the U.S. A capacity crowd of 50,000 in Tokyo watched Aaron win 10-9, with the American shaking Oh's hand warmly afterward. People in Japan still remember that event. Oh topped Aaron's record on Sept. 3, 1977, at Korakuen, hitting his 756th career home run before a crowd of 55,000 wildly cheering fans. An office building lit up a sign that said "Congratulations, Oh 756" and the U.S. Ambassador sent his regards in a telegram. Japanese television broadcast a videotaped message from Aaron stating: "I would have loved to have been there tonight to put the crown on top of his head because he certainly is quite a gentleman and the people of Japan have a lot to be proud of. I want to wish him the best of luck in the world. I know he is capable of hitting more home runs."

Aaron had respect for the Japanese game and for Oh's accomplishments, unlike many in the U.S. who viewed Japan's version of baseball as somewhat inferior, and one that was played in smaller parks. But a fair analysis would note that Oh hit his homers in shorter seasons against pitchers who preferred to walk him rather than challenge him. Final career statistics showed that Aaron hit a home run in every 18.46 official at-bats, while Oh's rate was one of 13.67. Moreover, there were usually two or three former MLB level pitchers on every Japanese team at the time.

"There are a lot of big-league level players [there]," Aaron said. "Oh could be a big star in America." Aaron seemed to take issue with those who felt Oh's achievement was not a real "world record."

Many former MLB players familiar with Japanese baseball echoed Aaron's sentiment. Former New York Yankees star Clete Boyer, who played with Aaron in Atlanta and then against Sadaharu Oh as a third baseman for the Taiyo Whales in Japan, said: "I think Oh is super. He is one of the best players I've ever seen. If he played in the MLB, he'd probably lead the league in home runs and would hit with the best of them. He'd be a Hall of Famer."

Aaron and Oh formed a long friendship. They reenacted their home run derby 10 years later on July 21, 1984 -- again at Korakuen -- and later created the World Children's Baseball Fair to increase awareness of the game to youngsters around the world. The inaugural event took place in August 1990 and has been held every year until COVID-19 forced a cancellation in 2019. Oh and Aaron attended many of the sessions.

In 1992, the two men also initiated the establishment of the World Children's Baseball Foundation to complement the fair. Aaron last appeared in Japan in 2015. That same year, he received the Order of the Rising Sun from the Japanese emperor for his furtherance of U.S.-Japan friendship through baseball.

The two men had much in common besides baseball. Oh was the son of a Chinese father and a Japanese mother and also experienced discrimination growing up. He was barred from playing in a National Sports Festival because he was not a Japanese citizen. Oh holds a Taiwanese passport. He helped Yomiuri win 14 pennants and 11 Japan Series championships, including a record streak of nine straight from 1965 to 1973, winning nine MVPs and two Triple Crowns in the process. 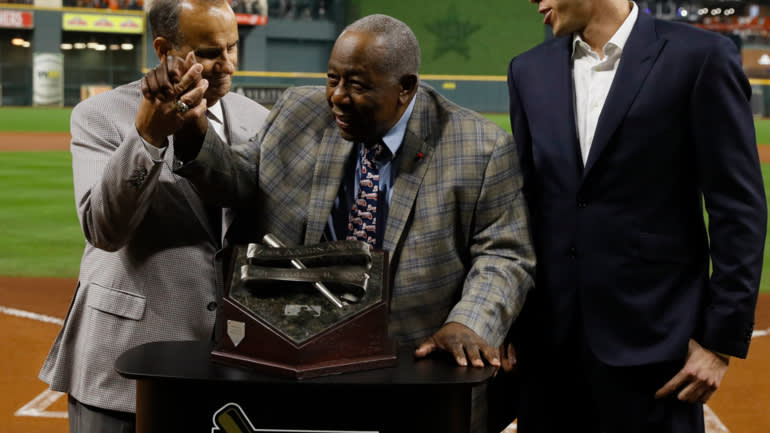 Aaron is joined by MLB Chief Baseball Officer Joe Torre, left, for a presentation of the 2019 Hank Aaron Awards before Game 2 of the 2019 World Series.   © Pool Photo/USA TODAY Sports/Reuters

But he was always less popular with fans than his star teammate, the iconic Shigeo Nagashima, who was nicknamed "Mr. Giants" despite lesser accomplishments. Warren Cromartie, who played for Yomiuri during the 1980s when Oh was manager, declared that executives in the Giants front office at the time were "racist," noting that they showed far less respect to Oh than they did to the previous manager, the pure-blood Nagashima, who would visit the team often.

"I'm a black son of a bitch," Cromartie said, "and I can spot a racist a mile away. They were just rude to Oh in general. But they kissed Nagashima's ass. Oh, in my opinion, is worth 10 of Nagashima."

In 2004, he was awarded the Presidential Medal of Freedom by then-President George W. Bush.

Aaron was a family man, a practicing Catholic, who stayed away from substance abuse and any other kind of trouble. He possessed uncommon decency, which I experienced first hand when I attended a reception at the U.S. Embassy in Tokyo. I was nursing my drink, staring into space, when an African-American approached me and extended his hand. "Hi," he said warmly, "I'm Hank Aaron." I was speechless. All I could do was stammer and say "It's an honor to meet you" before he moved on to someone else. I've met many famous people in my life, but I have never met anyone with Aaron's stature who did that.

Sadaharu Oh, now 80, expressed his condolences in a statement in which he said: "He had a long career and was a tremendous gentleman. He was great in everything and the epitome of a major league baseball player ... I thank you for so many things and pray for your soul."