Jean-Paul Belmondo, the French actor famous for Breathless, Pierrot le Fou and That Man from Rio, died at home in Paris last week at the age of 88.

He was the biggest male star in postwar French cinema. More broadly, he stood shoulder-to-shoulder with Jean Gabin, the great actor from the golden age of French movies in the 1930s. His wild charm compared to the likes of Marlon Brando and Toshiro Mifune, making him a rare kind of actor.

Belmondo was born in 1933 in the Paris suburb of Neuilly-sur-Seine as the son of a sculptor. He trained at the National Conservatory of Dramatic Arts in the French capital and started a career on stage and screen in the 1950s. His breakout and definitive work was Breathless (1960) by Jean-Luc Godard. Belmondo played a gangster who shot and killed a police officer in southern France, before wandering around Paris and eventually dying after being betrayed by his girlfriend. Belmondo radiated a light-footed nihilism in the part, embodying a new type of human in a new era. The shock he gave to cinemagoers in the role was up there with the sensation created by Meursault, the protagonist of Albert Camus' The Stranger.

The Nouvelle Vague, or New Wave, cinema movement spearheaded by Godard and Francois Truffaut was sweeping the world at that time, helping cement Belmondo's iconic status. His collaboration with Godard culminated in Pierrot le Fou (1965), mesmerizing film fans the world over with his portrayal of a devil-may-care lifestyle and death.

He was equally at home in big blockbusters as he was in arthouse movies. For example, Belmondo teamed up with Philippe de Broca in the early 1960s for That Man from Rio and The Man from Kathmandu. He was praised for carrying out his own dangerous stunts in the films, with That Man from Rio said to be the inspiration for Steven Spielberg's Indiana Jones franchise. 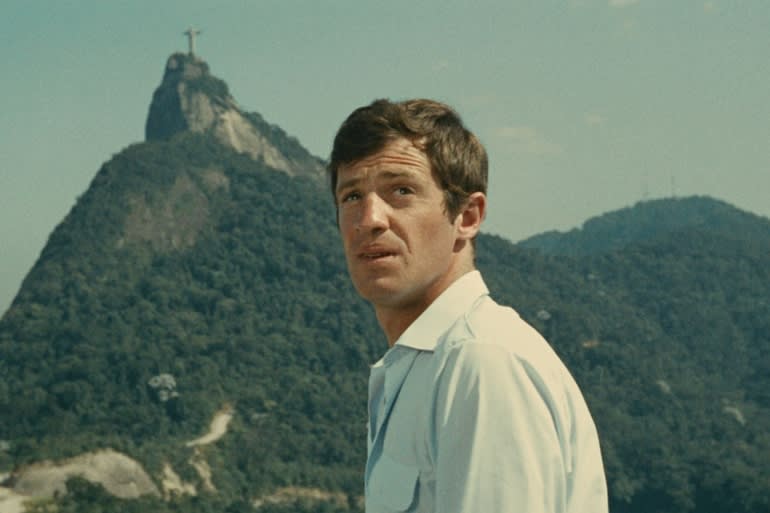 Belmondo did his own stunts in That Man from Rio, a film which was said to inspire the Indiana Jones franchise.   © Capital Pictures/amanaimages

From then on, white-knuckle action scenes became one of the main draws of his films. Blending action with comic charm, Belmondo became France's most bankable actor in the 1970s and 1980s.

The classically trained star then gradually shifted his focus to stage, where he began his career. In 1989, he won rave reviews playing the lead in Cyrano de Bergerac, the most important play in French theater. The success led to a world tour from 1991, including performances in Japan the following year, with his athletic prowess on full display in the production's sword fight scenes.

It's well known that the lead character of Japanese manga and anime series Lupin the Third is modeled on Belmondo. The late voice actor Yasuo Yamada, who gave the voice to the gentleman thief, also dubbed Belmondo in films.

Belmondo gave up stage acting after falling ill in 1999 and seldom appeared in films after that. But he didn't officially announce his retirement from the big screen and stage until 2015.

The news of his death arrived as Japanese cinephiles were rediscovering the iconic actor thanks to the screenings of his films in selected cinemas last year.

According to a statement by his lawyer, Belmondo "had been exhausted for some time and died peacefully." It was an ending worthy of a great actor.

Shohei Chujo is a scholar of French literature and professor at Gakushuin University's Faculty of Letters. His research field is 19th-century French novels. He is also a film and jazz critic.