TOKYO -- Kenzo Takada, who passed away on Sunday, was not the type to put on airs. He hated formal authority, and loved freedom and laughter. "I'm like Peter Pan -- no matter how old I get, I'm still chasing my dreams," he would say with a laugh.

The motifs of his work refused to be bound by conventional standards, and they had no rules. He used the cotton typically reserved for summer wear in fall and winter clothes, and boldly layered different patterns and flashy primary colors on top of one another. These techniques were considered "forbidden" in Western fashion.

Kenzo made quite a stir when he made his debut in Paris in 1970. He was seen as the standard-bearer for ready-to-wear fashion for regular people, which replaced the haute couture, or custom-made clothing, of the wealthy.

Paris was experiencing massive changes, including an anti-war movement and hippie culture, and stereotypes were disintegrating. "I rode the wave of the times pretty well," he later recalled. "I had no money, but designing clothes in the seventies was the most fun I had. I was a designer who was discovered and nurtured by Paris."

His adventurous spirit, and his philosophy of "experiencing and challenging anything," drove his breakthroughs. He often reminisced about a monthlong voyage on a ship from Yokohama to Marseille he took after taking a leave of absence from his job.

Southeast Asia, the Middle East, Africa and Europe -- the folk costumes he saw at each port of call appear to have greatly influenced his later style. His passion, which was shared with other young Japanese during the period of high economic growth, may have moved the world and the times. 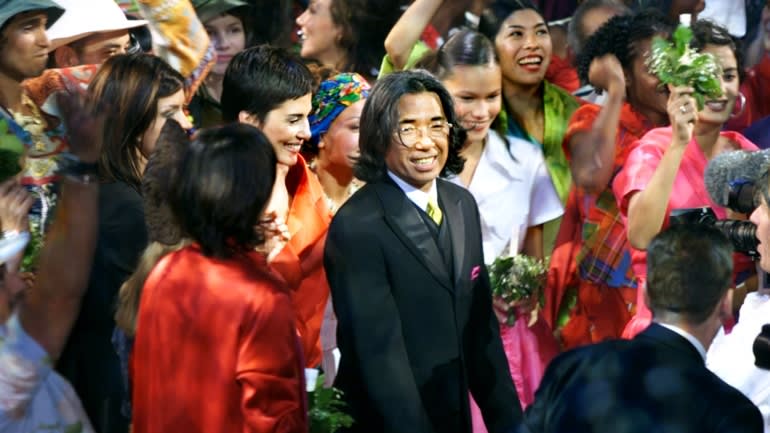 Kenzo Takada is congratulated by models after his Spring/Summer 2000 ready-to-wear fashion show in Paris in 1999.    © Reuters

But Kenzo was not good at business, and he had little talent for management.

His company's annual sales grew rapidly in the eighties, thanks to overseas expansions and its licensing business. But things became more difficult in the nineties, and his partner, Xavier de Castella, who supported him both materially and emotionally, died of illness.

He sold his "Kenzo" brand to LVMH Moet Hennessy Louis Vuitton in 1993. In 1999, he had a falling out with LVMH Group head Bernard Arnault over management policy and retired as a designer for the Kenzo brand.

After resting and recharging, he established a new brand in 2004, Gokan Kobo, which was changed to "Takada" in 2006. An ensuing legal battle over the trademark and excessive investment led him to declare personal bankruptcy in 2007.

Looking for a fresh start, this past January he launched a new interior design brand, K3. The company had shown great ambition but met with misfortune, the new coronavirus, just as it was finding its feet.