TOKYO -- Minoru Yoneyama, a former prisoner of war who founded Japanese sports equipment maker Yonex, a favorite among pro tennis players, died on Saturday at the age of 95.

Yonex's rackets have been used by such tennis stars as Billie Jean King, Martina Navratilova and Kimiko Date, garnering worldwide attention for a company that started out making fishing gear.

Yoneyama was born in Niigata Prefecture, north of Tokyo.

No stranger to adversity, he entered into business after being released from a prisoner of war camp in Okinawa. He was part of a Japanese suicide unit meant to ram explosive-laden boats into American transport ships, but never received an order for a mission.

In 1946, Yoneyama started making and selling floats for sport fishing. He began producing badminton rackets in 1957, and they remain one of the company's mainstay products.

In 1958, Yoneyama established Yoneyama Co. to focus on rackets. It moved into tennis in 1969, followed by golf in 1982. The company was renamed Yonex and moved its headquarters to Tokyo.

Yonex secured contracts with King and other leading tennis players by asking them what they wanted in a racket, then improving the performance and design step by step until they were satisfied.

Yoneyama's motto was, "If you fall, pick yourself up as a bigger man."

His resilience was put to the test when a racket factory burned down in 1963. In just three days, the company was able to put up a new facility and resume production. 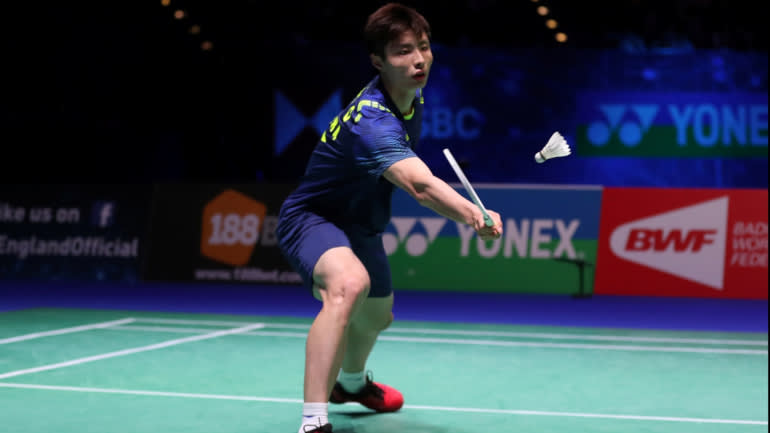 China's Shi Yuqi in action at the Yonex All England Open Badminton Championships in 2018. Beyond tennis, the brand is well known in badminton-mad Asia.   © Reuters