Preserving and reviving the treasures of old Thailand

BANGKOK -- There was a certain irony in meeting Yongtanit Pimonsathean in a modern skyscraper overlooking Bangkok's impressive cityscape given the subject to be discussed: his conservation program and passion for Thailand's heritage buildings.

The soft-spoken academic from Thammasat University in Bangkok, who also serves as a senior advisor to the King's Crown Property Bureau, recalled his third year of architectural studies at the university. A visiting lecturer showed the students some developments in the Thai countryside. Yongtanit said he was astonished to find they were all based on Western architectural concepts. "That was a turning point in my life," he said. Yongtanit's fascination with the Thai countryside and its traditional way of life grew from there, and when he was offered a scholarship for a master's program at Tokyo University, he opted for urban planning over architecture.

His advisor was Japanese professor Yukio Nishimura, an authority in the field of urban conservation in Asia and an advocate of projects under Unesco. Yongtanit said he shared Nishimura's interest in preserving traditional Asian buildings and citizen-based developments. After completing his studies, he returned to Bangkok to put his ideas into action. 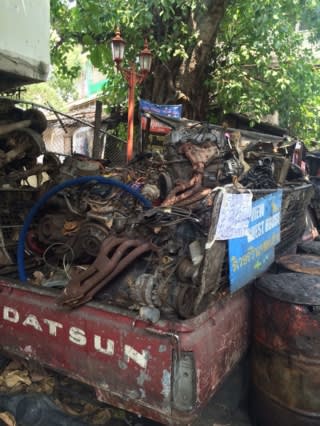 Beyond the elegant old buildings and rows of shop houses lies a grittier side of Bangkok's Chinatown, such as this area, known for scrap metal and car parts. (Photo by Colette Whittaker)

A stroll through history

Shortly before our interview, I joined a group study tour led by Yongtanit through a small section of Bangkok's seething Chinatown, reputed to be one of the world's largest -- and certainly one of its most colorful.

The area contains a vast range of architectural styles, reflecting the waves of immigrants who arrived and established themselves in this part of Bangkok, including Portuguese, Chinese and French. The narrow streets and footpaths hold a surprising number of historic gems, spanning three centuries of development, and testify to a past that is fast giving way to the sweeping culture of vertical urbanism which is today's definition of the global metropolis. It is a largely forgotten world, in which animated lanes accommodate entire communities still living in traditional ways and continuing the trades of their ancestors.

One lesser-known site is the century-old former home of French beverage company Societe Francaise des Distilleries de l'Indochine, built by an Italian architect toward the end of the reign of King Chulalongkorn, also known as Rama V. The building is undergoing a total restoration under the patronage of the CPB.

Our walk also passed through the old market, Talat Noi, and its splendid church built by Portuguese refugees who had fled the Ayutthaya-Burmese war in 1767. The narrow streets and pathways contain evidence of the early Chinese settlers, too: clan houses, shop houses and temples. There is also the Peiing school. Built in 1920, it was, at the time, the largest Teochew language school in the city and served a community that was rapidly expanding and becoming part of the fabric of Thai society. 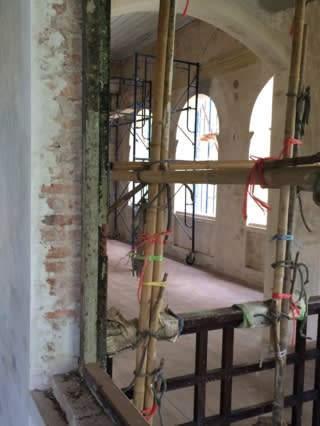 The tour ended at the site of Luen Rit Community, a CPB project being nurtured by Yongtanit, who showed us around like a proud father. The compound comprises 224 "shop houses," built in 1910 and now under restoration, where Indian and Chinese traders lived and worked together. The residents had to leave the site in 2000 due to a planned redevelopment, but managed, after long negotiations with developers and the CPB, to establish a community corporation that was granted a 30-year lease for a rehabilitation program run by the community itself.

This is the first example in Thailand of a case in which citizens were able to create a public company and, with the blessing of the CPB, run their own conservation project. Luen Rit is somewhat of an experimental concept, Yongtanit explained, with a philosophy based on transparency and accountability.

Luen Rit is also important because it demonstrates that the relatively lowly shop house can be included in conservation programs alongside the grander palaces, major residences and public buildings. It places them at the heart of the country's living heritage, among the unique symbols distinguishing one nation from another.

The shop house was originally developed as a way for the royal family to generate profit by collecting rent from traders. Now, as Bangkok springs skywards with sparkling new developments replacing old structures, planners and conservationists see the importance of preserving and restoring such buildings as a testimony to the evolution of urban development. The roots they embody knit the history of the city and its society together. "How can a nation survive and develop if it does not respect its ancestors and their legacy?" Yongtanit asked.

On their physical merits alone, the shop houses are often beautiful and display fascinating architectural flourishes. One had a facade displaying a bas-relief of fruits and vegetables, a symbol of its owner's trade. Contrary to today's trend toward functional yet drab industrial parks built outside city centers, the conservation of these shop houses revives the spirit of the communities that founded them, living, working and raising families there with the hope that their descendants would continue to do so for generations. As a country proud of never having been colonized, Thailand has maintained the thread of its traditional crafts, still displaying many skills that other countries in the region lost after colonization. As the movement to preserve these old treasures gathers pace, the challenge is to fully convey the value of these skills to contemporary Thai society.

In 1992, an environmental law was passed granting autonomy to Thailand's municipalities. This relaxed the central government's control over decisions related to preservation and conservation projects and allowed direct consultation and collaboration between a municipality and its residents. In 1994, Thailand's southern resort island of Phuket was chosen as the model city for the environmental management program, Yongtanit said.

The new law applied to approximately 10 other municipalities. Most decided to work on projects such as solid waste management and wastewater treatment systems. Phuket was the only municipality to concentrate on preserving its heritage.

The aim of the Phuket project was the preservation and conservation of the buildings of historic interest in the city's Old Town. The project set a precedent and was experimental in its approach. It allowed conservationists to work directly with the local administration and residents, in the process learning about the relationship between the local community and its municipality.

What was so special about Phuket? History, said Yongtanit.

The Portuguese were the first Western traders to arrive on the island. They came four centuries ago, driven by their need for tin, an abundant resource in Phuket. They had left by the time the Chinese arrived from Penang in the early 1800s. The latter created a link via the mining industry between Siam and the Malay sultanates that subsequently formed independent Malaysia. With tin in great demand, Europe's Industrial Revolution left a major mark on the island, leading to further development as the region's main trading port. Phuket began to establish itself, building, in the 1850s, a government office, a pier and a commercial street. The shop houses in Phuket followed the same architectural model as those of George Town in Penang. In fact, the umbilical cord between the two towns was so strong that even today, Chinese visitors from Phuket can see pictures of their ancestors hanging in museums in Penang.

Phuket's decision was quite radical considering that it came so soon after passage of the 1992 law. After finishing his doctorate, Yongtanit was invited to be the local expert in connection with the Phuket conservation program, and he rapidly became central to the ambitious scheme. He helped establish a local historical group with the aim of learning about the background of each property through its title deeds.

The old shop houses are now being turned into hostels, maintaining their original character. An inventory of them all, around 300 in total, is still in process, and the objective is to halt new development in the town center. Thanks to Yongtanit, visitors can discover far more than just Phuket's famed beach and golf culture. The Old Town and its rich history has gained a new lease of life.

Yongtanit, in his typically modest way, insists: "I learnt a lot from the people of Phuket." Laughing, he added, "I suppose I arrived there as a good student with empty hands and was therefore able to collect a lot of information." He became a good friend of the people of Phuket and continues to give advice whenever needed. His future projects there "will be about the Old City, its old walls and the fort," he said with obvious enthusiasm.

The work of Yongtanit and his peers highlights the importance for the current generation of Thais and for future ones, of prioritizing conservation. It is part of educating a nation about its heritage and helping it through its current choices. History is eroded each time a site of cultural interest is condemned and rebuilt. This is happening at an increasingly rapid pace in most developing countries in Asia. If these practices continue, as Yongtanit fears, there will be very few signs left by which to read the past and understand what brought us to where we are now.