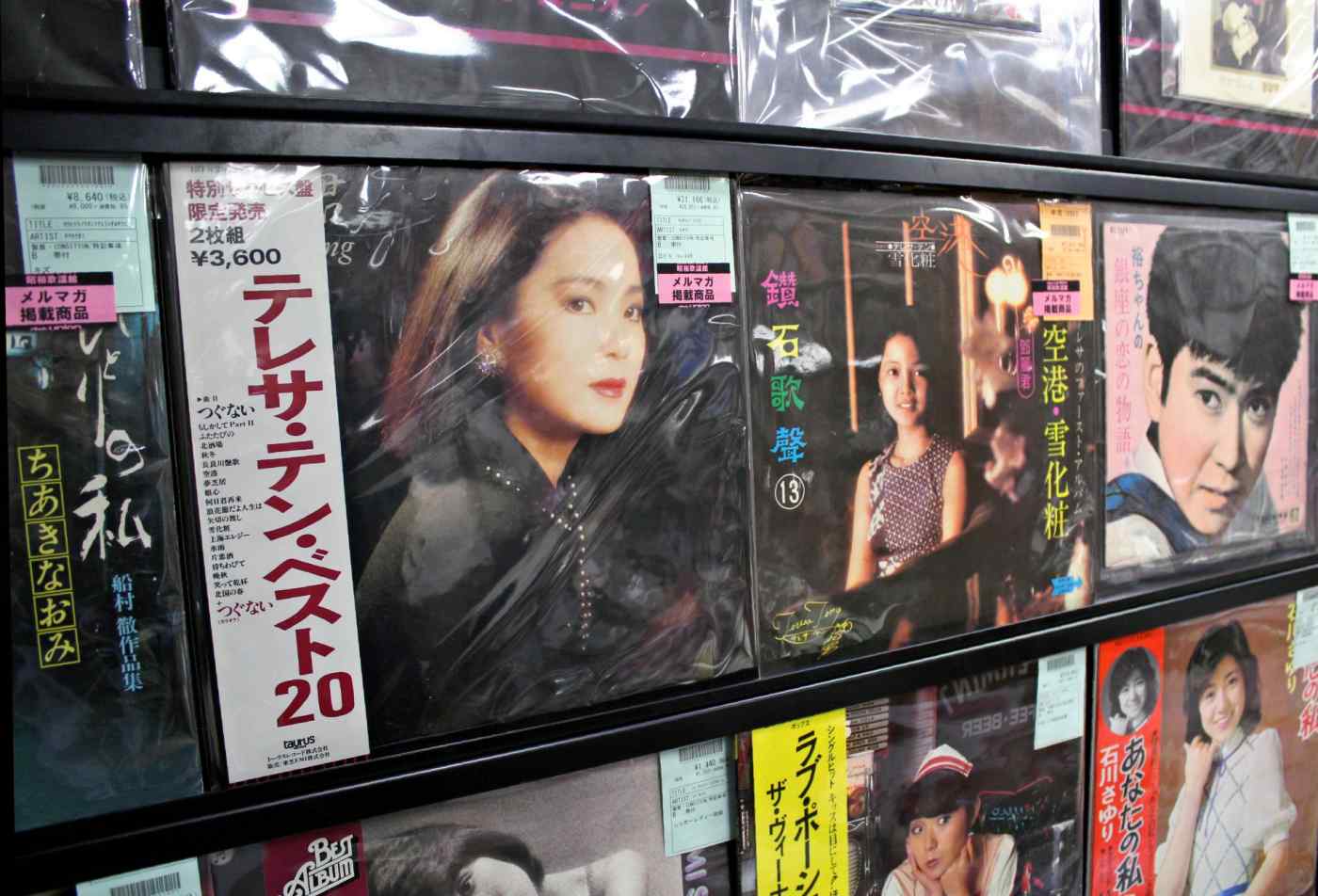 TOKYO -- Two decades have passed since the death of Taiwanese pop star Teresa Teng at the age of 42. Fans across Asia -- from Japan to mainland China to Southeast Asia -- still adore her, and plans to commemorate her life and songs are underway throughout the region.

"Some customers, who seem to be Chinese, will buy several of records of hers at once, with each one costing tens of thousands of yen," said Hiroshi Sugimoto, the manager of diskunion Showa Kayou Store, a record and CD store in Shinjuku, Tokyo. The store offers about 20,000 records and CDs, mostly of Japanese pop songs from the mid-to-late Showa era (1926-1989). Secondhand Teresa Teng LPs released in the 1970s and 1980s are among the most popular items. Records of hers in good condition and still have the obi -- a strip of paper bearing the album's title -- over the record sleeve sell for around 10,000-30,000 yen ($82-$248).

Prices of Teresa Teng LPs began rising about three years ago. "Pop records were largely singles in the 1970s and 1980s, so her secondhand LPs are hard to come by," Sugimoto said. "Moreover, you can listen to many of her songs only on LPs issued in Japan, which is one reason for soaring overseas demand for them. A sizable number of these LPs have been taken to the greater China region."

Fans around the world have launched an Internet campaign to have Teng, who was also known as Deng Lijun, appear on the top pages of major search engine sites, including those of Google, Yahoo and Baidu, on May 8, the anniversary of her death.

They have created Japanese and English email templates that fellow admirers can use to send their request to the search engine operators.

Various events are being planned in Japan and elsewhere, including a memorial concert to be held at Shibuya Public Hall in Tokyo on May 23. Many of her CDs have also been re-released. "Teresa Teng 40/40," an album containing her biggest hits, will go on sale on May 6.

Songwriter Toyohisa Araki wrote some of Teng's signature pieces, including "Toki no Nagare ni Mi wo Makase" (I only care about you), "Tsugunai" (Debt) and "Aijin" (Lover). He described her as "demure but independent and strong," adding that, "Such women are commonplace today, but more than 20 years ago, she represented a new type of woman."

Because her activities in Japan focused on TV appearances as a singer, fans in the country knew little about her other aspects. In her homeland of Taiwan, however, she had a much bigger role.

Her father hailed from China's Hebei Province and was a former military man and member of the nationalist Kuomintang. After the Chinese civil war, he and his family moved to Taiwan in 1949 with then-Kuomintang leader Chiang Kai-shek. Teng, born in 1953, participated in visits to military bases to entertain soldiers and also took part in charity concerts. For these activities, she was known as "the military sweetheart" and a "patriotic entertainer."

In 2010, a museum displaying some of her personal items was set up in Kaohsiung, Taiwan. A plan to open a branch of the museum in Kinmen Island, the site of a grueling battle during the civil war, has also emerged, underscoring her continuing popularity.

At the time of the Tiananmen Square incident in 1989, she made her criticism of mainland Chinese Communist Party government known by appearing in a pro-democracy concert held in Hong Kong. She never set foot on the mainland due to her political background, yet she gained much popularity in the mainland as well.

Pirate tapes of her songs began circulating there in the 1970s. In the 1980s, Chinese authorities cracked down on the tapes, labeling her songs "decadent." But many continued to listen to them secretly. This led to a bit of wordplay -- "During the day, listen to Deng Xiaoping. At night, listen to Deng Lijun" -- catching on.

Teng's songs are no longer regarded as taboo on the mainland. A concert celebrating the 60th anniversary of her birth took place in Beijing in 2013. "Today, the Chinese authorities would welcome her if she were alive," said Shinji Kondo, former chief of the Taipei bureau of The Mainichi Newspapers and now a professor at Otemon Gakuin University. Many of the tourists visiting her museum in Taiwan or her birthplace in Yunlin County are mainlanders, according to Kondo. "She would be treated well as a symbol of the deepening of ties between China and Taiwan since the 2008 launch of the Ma Ying-jeou government in Taiwan," he said.

In 1983, Teng released "Dan Dan You Qing" (Light exquisite feeling), a collection of poems from China's Song dynasty era set to music. She apparently felt a deep attachment to the mainland, where her roots were, as she immersed herself in classics of the Tang and Song periods. "The nostalgia in her songs attracts people worldwide," Kondo said.

In the 20 years since Teng's death, Asia has undergone significant changes. China, South Korea and Southeast Asian countries have grown and the flow of people, goods and information has increased considerably. At the same time, new political frictions have developed. Teng, who continues to be loved across national and ethnic boundaries, still shines as a voice uniting Asia through song.