Artists and writers take on military through social media, art and street protests 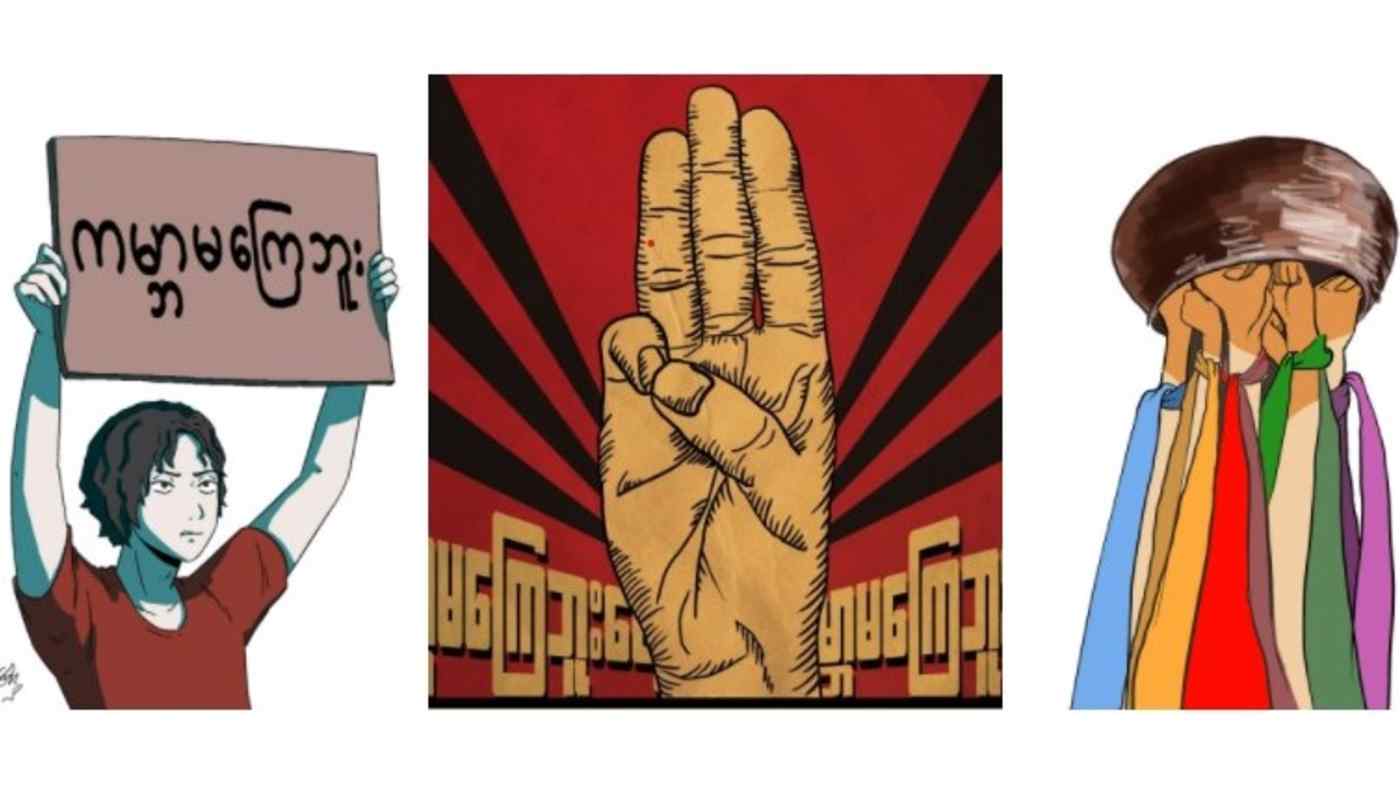 In the two weeks since she woke up to Myanmar's "nightmare" military coup on Feb. 1, Winnie Thaw has unwittingly taken on a huge and unpaid job -- sifting through an avalanche of news to help people figure out what is real and what is fake in her country.

"I sleep late because the Tatmadaw (Myanmar's armed forces) does things at night. But then I'll wake up at, like, 6 a.m. and freak out, 'What have I missed?'" said the 25-year-old, who works in the development sector.

For Aye Min Thant, 28, a Pulitzer Prize-winning journalist who has been live-tweeting developments in the Southeast Asian nation to tens of thousands of followers, sleep comes at a different house every night -- a step she has taken for safety.

Adrenaline, anger and an ability to keep cracking jokes are sustaining her, she said. "We're all trying to do what we can with what we have within our comfort levels. And after the crying it's great to have jokes."

Esther Ze Naw, a youth leader, said she could not sleep after the coup, racked with concerns over what it would mean for Myanmar's ethnic groups, who have historically suffered at the hands of the Tatmadaw. 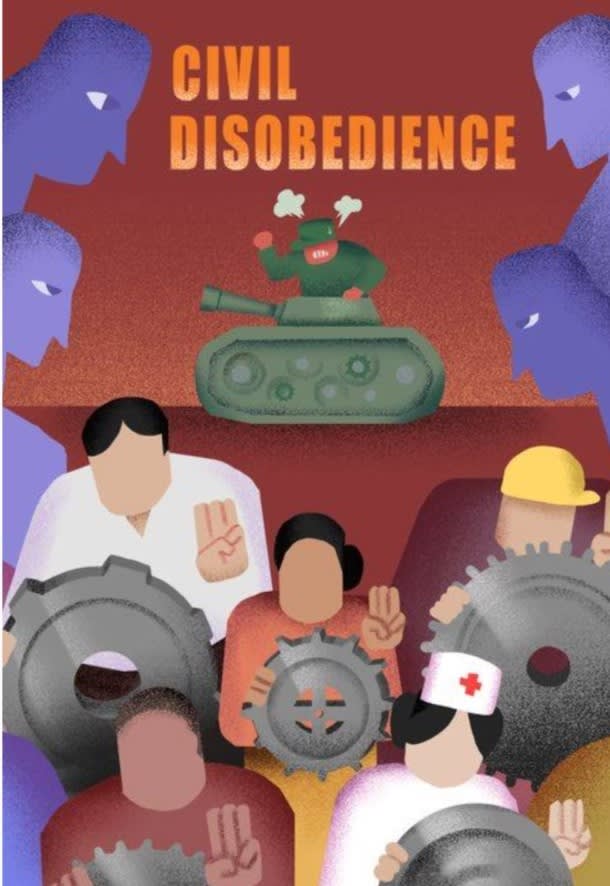 Top, middle: Protest art. (Courtesy of Art for Freedom (Myanmar)). Bottom: Esther Ze Naw, wearing a mask, leads one of the first protest marches against the coup, on Feb. 6 in Yangon. (Reuters)

The youth leader is a critic of Myanmar's deposed leader Aung San Suu Kyi and her National League for Democracy party because of its lack of opposition to the military's atrocities in 2016-17 against Myanmar's Muslim Rohingya minority in the western state of Rakhine. But she helped to organize one of the first big public rallies against the coup on Feb. 6.

"Our activities are based on our beliefs rather than on a single person or party," said the 26-year-old. "We are scared, but if we don't do anything, our fears will overwhelm us and the dictatorship will be even stronger."

Shocked but unbowed, Winnie Thaw, Aye Min Thant and Esther Ze Naw are part of a new generation of Myanmar journalists, activists and artists who have been fighting the military using social media, art and street protests since the country's decade of democracy was abruptly upended by the coup.

Ordinary Myanmar people responded swiftly and unequivocally in condemning the putsch, but it is these savvy young voices who are emerging as one of the biggest transformative forces in a nation long beset by ethnic and religious strife.

They tweet support for the Rohingya and call on the international community to look at Myanmar beyond Suu Kyi -- sentiments few dared to utter in public until recently. And they are seeing some results. Just 20 minutes after Winnie Thaw tweeted her worries that the world is losing interest in Myanmar, the European Union's ambassador assured her that "the EU will continue to remain a partner of Myanmar ... day after day." 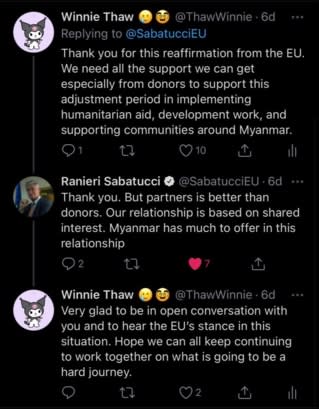 A screenshot of the Twitter dialogue between Winnie Thaw and Ranieri Sabatucci, the European Union's ambassador to Myanmar.

Esther Ze Naw said people from the majority Bamar population group were expressing increasing empathy toward ethnic minorities. "When there was an internet blackout, they said, 'Oh this happened in Rakhine for a whole year. How suffocated and trapped they must have felt.' I was pleased to hear that."

Kenneth Wong, a Myanmar American blogger and author who left the country in the aftermath of student protests in 1988, said that some of the anti-coup protesters had previously been subjected to heavy criticism for speaking up for the Rohingya or against the NLD's relationship with the military.

"It shows the people's distaste for military rule transcends their disagreement on other issues," Wong said.

The anti-military alliance also includes Soup Not Coup, a new Twitter account whose tongue-in-cheek insults and witticisms are laced with sharp insights into life in Myanmar. "These little green men (the coup leaders) are so steeped in their own tea that they have deluded themselves into believing they are the best flavor. But a dictatorship is not what we ordered," the group told Nikkei Asia via Twitter.

"We have to use the tools in our kitchen to whip up new ways of challenging the regime," the group added, declining to identify itself beyond saying it is a "Myanmar original recipe" with an average age of 28.

For many, the motivation to resist comes from a determination not to go back to the fear and isolation that blighted the lives of a previous generation. "Younger people have felt and seen the positivity and consequences of democracy and freedom in the last five years. I don't want censorship back in the galleries either," said a 25-year-old artist who goes by the pseudonym Antithesis.

He produced his first protest art a day after the coup -- a simple, graffiti-style piece with the words "disobey" in white against a red background -- and has since used pop culture references in his work, from Canadian singer The Weeknd to Elmer Fudd, a character in Warner Bros.' "Looney Tunes" cartoon series.

Having witnessed monks being shot during Myanmar's failed Saffron Revolution in 2007, he requested anonymity for fear of military reprisals. These protest artworks by 25-year-old Antithesis, a pseudonym, use wordplay and pop-culture imagery, in this case cartoon character Elmer Fudd and Canadian singer The Weeknd. (Courtesy of Antithesis)

The concerns of environmental activist JC, 25, focus on losing simple but concrete functions like the ability to connect with the rest of the world. "Just five years ago, the internet connection was really bad. Now we can easily use it at home, just like in Thailand. The military is dragging us back to the past. I don't want to go back," she said.

"I'm afraid, but I'm also really angry and sad," she said, adding that drawing posters denouncing the coup has provided some relief.

Such fear and uncertainty is captured in "Our Struggle for Freedom," a vivid mixed media drawing by Soe Yu Nwe, a 31-year-old artist who normally works with ceramics. Here, a peacock, symbolizing Myanmar as well as the NLD, is held captive by a snake, representing more sinister forces, with the colors bursting into prism-like shapes at the picture's edge.

"The idea is of something that's unstable and has a lot of tension and it's gonna, like, explode or it's starting to disintegrate in the process of re-forming itself," she said. "I was thinking of the current situation where ... there's this intensity building up and you don't know what's going to happen." For Soe Yu Nwe, the bright palette is a conscious choice because, despite her doubts, she wants to be hopeful. 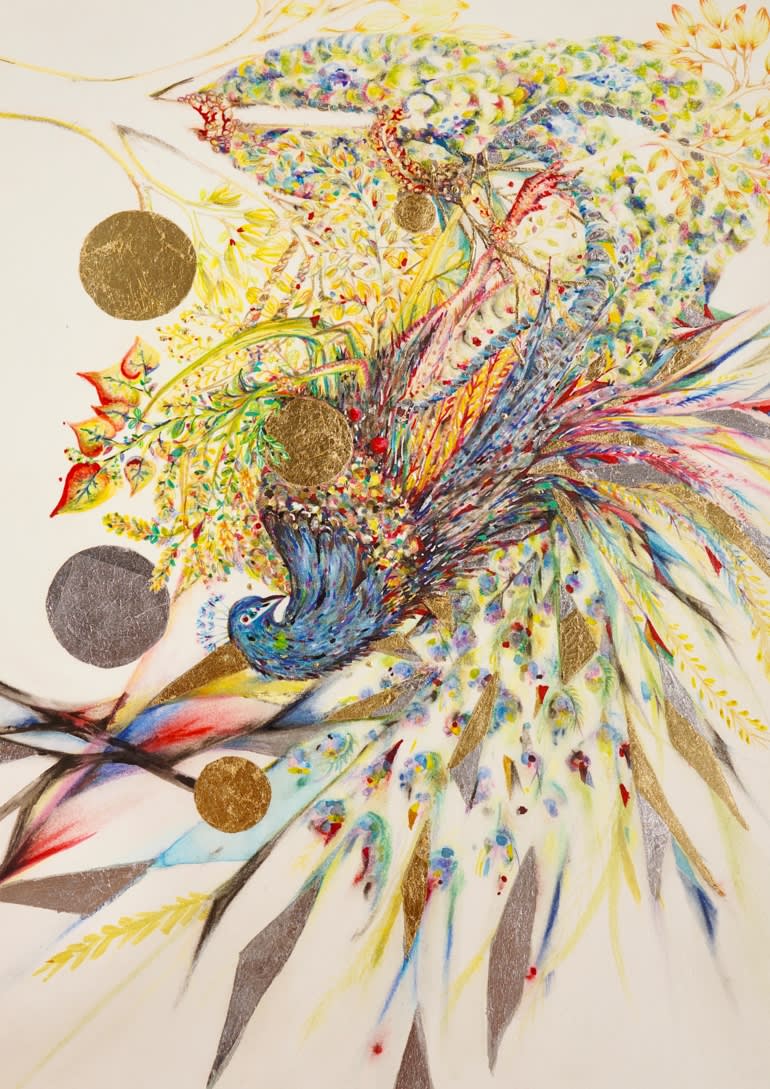 The explosion of creativity, which has filled Myanmar's streets as well as Facebook and Twitter feeds, has taken artists like Nobel Aung, 31, by pleasant surprise. On Feb. 4, he and his younger brother set up a private Facebook group -- Art for Freedom (Myanmar) -- to bring together artists and protesters. The group amassed 6,000 members in 10 days and now has a website where artworks can be downloaded for free as long as they are used to protest the coup.

"We wanted the world to see and hear the voices of the whole country through art," Nobel Aung said.

Blogger and author Wong said artists have been "instrumental" in promoting the three-finger salute from the 2012 film "The Hunger Games" as a protest symbol, rallying ordinary people to join a nightly beating of pots and pans, and urging civil servants to stop reporting for work. "The new battleground is social media, so livestreaming of marches, colorful memes, and viral artworks are the new weapons," Wong added. 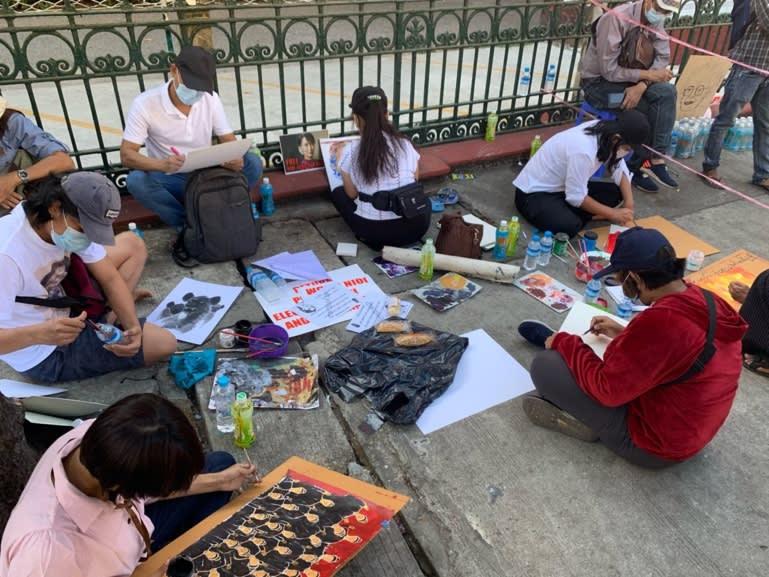 Professional and amateur artists gather on a corner of Pansodan Street in downtown Yangon to create and sell artwork for use in protests against the coup. Proceeds are used to support the civil disobedience movement. (Courtesy of JC)

Many journalists, artists and activists said the Myanmar protests are the first large-scale protest they have joined, and that seeing different ethnic and religious groups taking part has been inspiring.

Aung Kaung Myat, 27, a master's student from Myanmar at the University of Hong Kong, said he had seen some young Burmese publicly expressing regret for their previous indifference to issues such as the expulsion of the Rohingya minority, and voiced hopes that the trend would continue.

"I don't mean to say we can change public opinion with just one event, but I hope at least some people are realizing that if [the military] ousted the civilian government, elected by the majority of people, there's no way they won't commit crimes on populations that are considered alien," he said.

He also praised young people for challenging long-held beliefs in Myanmar's deeply conservative society, such as the automatic respect given to Buddhist monks wearing saffron robes, including Wirathu, who is known for verbal attacks on Myanmar's Muslim minority.

Winnie Thaw said she is grateful that voices that like hers are now seen as legitimate, but noted that Myanmar needs to have "uncomfortable conversations" on issues such as the fairness of the political system toward parties representing ethnic minorities.

Activists also said that Myanmar needed to address the apparent indifference of Suu Kyi and the NLD to the problems of ethnic minorities, such as hardships faced by people who have fled fighting between Kachin rebels and the Tatmadaw in the north.

However, this is a tricky area for activists, given the continuing popularity of Suu Kyi and the NLD, which won a landslide victory in national parliamentary elections last November and retains support from most anti-coup activists.

Aye Min Thant said the movement needed to empathize with Suu Kyi's supporters. "I grew up being told she is the reason there is hope ... so I try to understand the emotional place they're coming from. But one person cannot humanly be on that many committees and do a good job, regardless of what you think about her personally," she added. Protest artwork by JC, a 25-year-old environmental activist. The words in the bottom image say, “We will hit, we will bang, we will shout.” (Courtesy of JC)

Esther Ze Naw said she supported working with the NLD to reverse the coup, but would continue to criticize any party that failed to adhere to democratic values such as standing up for the truth and defending the vulnerable.

For all the excitement and promises, Wong, who was a university student during the 1988 protests, said he fears he is watching "a tragic drama" he has seen before. "The last time, the story ended with bloodshed and mass roundups, with hundreds of dissidents going underground or fleeing overseas. I really hope it has a different ending this time," he said.

Whatever the outcome, activists are finding numerous creative ways to tell the international community not to abandon Myanmar's people. "Myanmar is a soup in progress," said Soup Not Coup. "The base stock has been added, but the main ingredients are still missing. The young students of today are the makings of a remarkable dish. They just need a little seasoning."