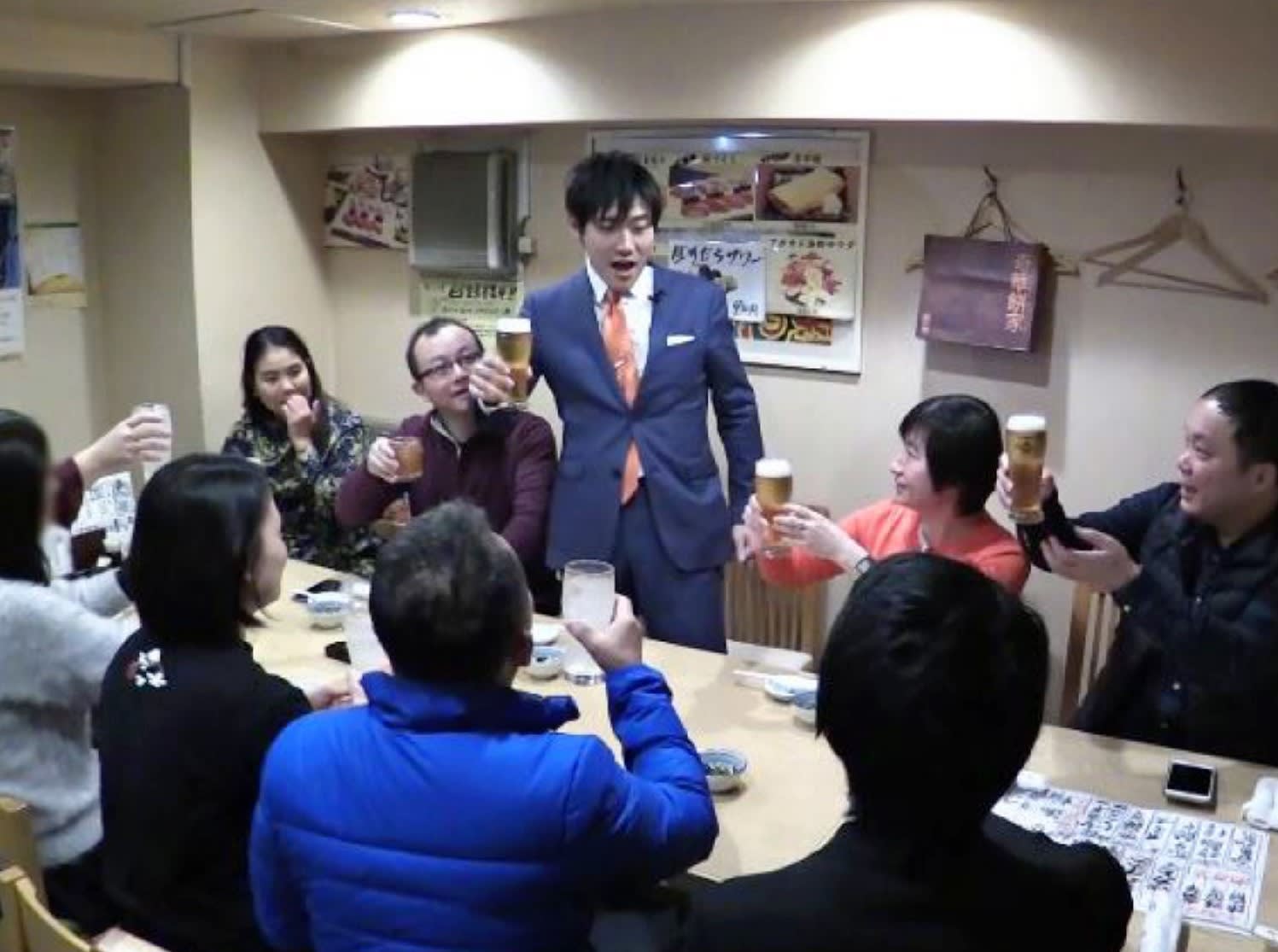 Tourists from Taiwan and Hong Kong gather at a Tokyo sushi restaurant to dine with Koichi Yoshida, whose Japan tourism information site attracts over 1 million users a month.

TOKYO -- He is known as the most famous Japanese in Taiwan.

Koichi Yoshida is the president of Tokyo-based Geelee Media Group, which operates a tourist information website for Taiwanese planning to visit his country. He has repeatedly appeared on TV in Taiwan, and followers of his Facebook account total more than 600,000.

To find out more about the man, I joined a visit to a Tokyo izakaya bar-restaurant he organized for tourists in late November. I arrived a little ahead of the 8 p.m. start, giving us time to chat. Tourists to Japan now spending more on the cheap

Tucked in the 'Alps,' the future of tourism in Japan

The venue was Sushi Darihan, a minute's walk from Yoyogi Station. Yoshida said that when he is staying in Tokyo, he comes to this sushi restaurant every three days.

Although he called it a tour, it was in fact more like a dinner during which fans could spend time with the star drinking, eating and talking.

Yoshida told me that he entered the National Defense Academy of Japan after graduating from high school, but quit without completing the training and instead entered Tokyo's Keio University, one of Japan's top private schools. Before starting his company, he worked for Asahi Broadcasting, which operates TV and radio stations in Osaka, western Japan, which he joined upon graduation.

His involvement with Taiwan started when he began learning Chinese while still in college.

Initially, Yoshida said, his interest was in the mainland city of Shanghai, and Taiwan did not particularly appeal to him as a place to do business.

Gap in the market

But in the process of seeking business ideas, he came upon the idea of launching a website targeted specifically at Taiwanese. Although Taiwanese have generally friendly sentiments toward Japanese, there was no website at the time that specialized in Japan tourism information for Taiwanese. The idea grew into Le Chi Gou! Japan (Let's Go Japan), which his company operates.

He has Taiwanese writers travel to various parts of Japan and write reports for the site, written from the Taiwanese viewpoint. From its launch in 2013, the venture quickly grew into the biggest Japan tourism information site for not only Taiwanese visitors but those from Hong Kong, with users exceeding 1 million per month.

Back in the sushi restaurant, eight tourists from Taiwan and Hong Kong arrived. All of them said they were here to meet Yoshida in person. Yoshida greeted them in Chinese with a noticeable Taiwanese accent. Wan Zheng, a 49-year-old participant and Chinese language teacher from Hong Kong, handed him a gift.

Yoshida ordered beers, saying, "This is a starter," and then began an informal lecture on Japanese culture. While talking, he continued to pay attention to everybody to make sure they were all happy. When one person said he could not drink too much alcohol, Yoshida advised him, "Don't force yourself!"

He proceeded to order the first courses: sashimi of buri, or yellowtail, and bonito fillet broiled on straw fire. In case the tourists might have been wondering why they were not eating sushi, he explained it was a local custom to first order a la carte dishes at a sushi restaurant, before moving on to sushi.

"Sushi at the end rounds out the dinner," Yoshida said.

Guo Chunan, 49, who works for a bank, and her husband, Shi Yaofu, 50, went on to order sake. The couple are sake aficionados who came to Japan for a tour of local breweries. They had seen the sake information on Yoshida's Facebook page and joined the event for a chance to drink with him.

For Zhang Wanru, a 34-year-old who works in Japan, part of Yoshida's appeal is his appearance. "For Taiwanese, his face is perfect," she said. "He's cuter in person than in photos."

The dinner continued longer than scheduled, ending at 11 p.m. As the evening went on, Yoshida got in the mood for antics, tying his tie around his head and acting silly.

"He would have remained a gorgeous guy if he didn't do this," said one female participant. But despite his star status, Yoshida's unpretentiousness and readiness to play around in front of his fans are clearly aspects of his character that have helped make him so popular. An ability to speak Chinese -- which I have too -- is not the only reason behind his success in reaching Taiwanese people.

As the number of visitors to Japan continues to grow, a trend is emerging whereby people like Yoshida who act as guides and information providers about Japan are having an increasing influence on tourists' travel decisions.

One company aiming to capture that trend is Airbnb, which provides an online market place that links up hosts who want to share rooms and people seeking accommodation. As well as showing available rooms, the site now lists tours organized by individuals. Users' decisions to apply for such tours is often motivated by who the guides are, not just the content of the tours.