TOKYO -- Japan's railways are renowned worldwide for their punctuality and safety, but a recent accident has shed light on an often overlooked problem: There are too many railway crossings, some of which are closed to traffic for long stretches of time.

On Thursday, around noon, a commuter train collided with a truck at a crossing in Yokohama, southwest of Tokyo, killing the truck driver and injuring 35 passengers. The accident drew international media attention.

The collision occurred at an "unopened railway crossing" -- defined by the transport ministry as a crossing where the gates remain shut for more than 40 minutes at a stretch. Such long waits happen because of the high volume of train traffic during rush hour in big cities like Tokyo.

Accidents occur at unopened crossings at four times the rate of normal railway crossings. Long waiting times cause headaches for drivers and snarl traffic. Elderly pedestrians can also have difficulty getting across the tracks before the gates close, which is another hazard.

The crash in Yokohama occurred at a crossing where the gate remains shut for up to 48 minutes during peak hours. It took place near shops, office and houses, and could have been more serious if it had happened during the morning or evening rush. The railway crossing where a truck collided with a Keikyu commuter train on Sept. 5: The arrow indicates the path the truck took before it was struck.   © Kyodo 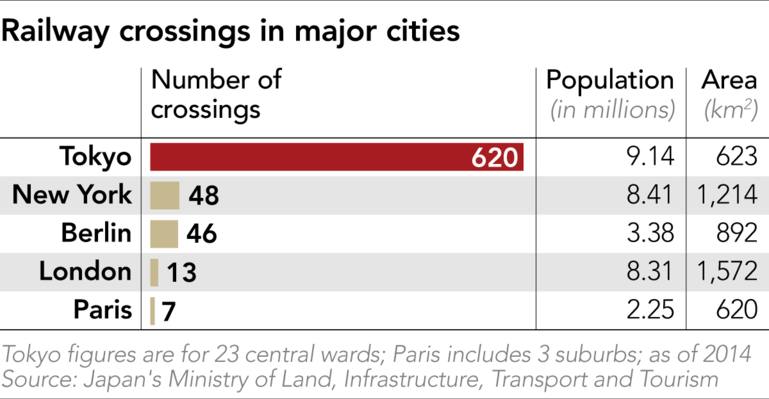 Tokyo has more vehicle traffic than other cities in Japan, and thus a greater risk of accidents at railway crossings. Japanese cities, in turn, tend to have more railway crossings than their counterparts around the world. Paris and its three neighboring cities have only seven crossings. Tokyo has 90 times that number.

As a stopgap safety measure, the transport ministry recommends coloring the pavement to distinguish roadways from pedestrian crosswalks. Colored pavements are used in many places, because they cost only around 1 million yen ($9,350) apiece, much less than building physical barriers. But coloring the pavement is less effective at preventing accidents.

Improving safety is hugely expensive and railway operators are reluctant to bear the costs. Building overpasses or underpasses can cost billions of yen for a single site. Keikyu the operator of the railway where the recent accident took place, had installed colored pavement at the site, but it did not have any other safety features at the crossing because there was little traffic there.

According to a government white paper on traffic safety, the number of accidents at railway crossings has fallen by half over the last 20 years. In 2018, there were 247 such accidents, down from around 500 in 2000. Although this shows the transport ministry's progress in persuading railway companies to improve safety, the Yokohama collision underscores the need for further effort. Tokyo's sheer size, density and traffic volume mean that tragedies will occur. The government must do what it can to keep them to a minimum.