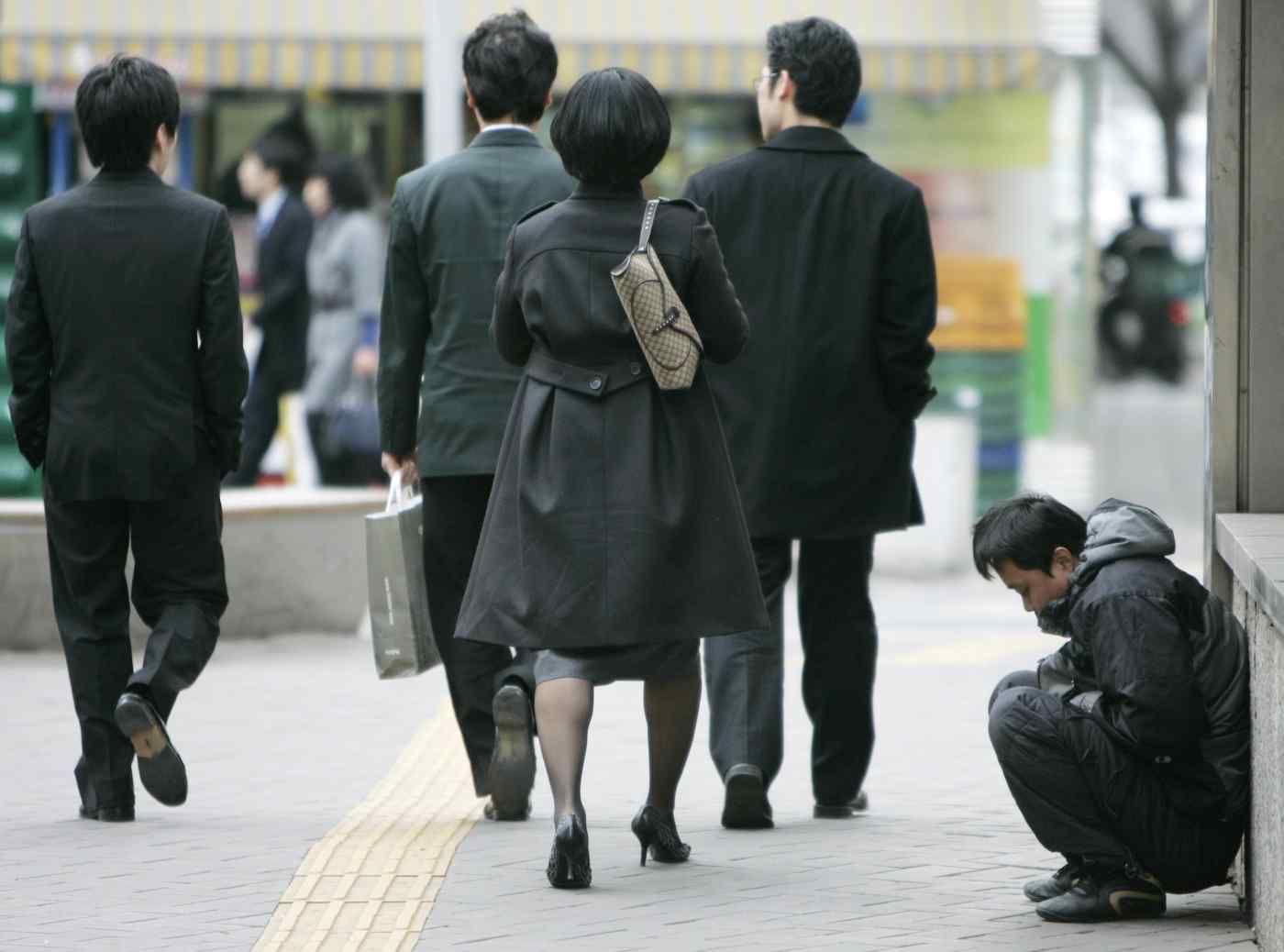 Youth unemployment is running near 10% in South Korea, leading many to give up on the idea of marriage and family.   © Reuters
KENICHI YAMADA, Nikkei staff writerApril 4, 2018 12:59 JST | South Korea
CopyCopied

SEOUL -- Vending machines are a handy way to grab a drink or snack on the go, but in Seoul, they offer more, including inspiration or a bit of advice.

A 27-year-old part-timer stands with a friend in front of a vending machine at the Seoul Theater Center in the capital's Daehangno district, pondering her options. The machine doles out "Remedies for the Soul" for youth in their 20s and 30s.

The machine spits out around 20 different prescriptions in little boxes labeled "Lost dreams," "Loneliness virus," "Low spirits" and so forth. "I am not confident lately," the woman says as she puts in 500 won (47 cents) to buy a box that reads: "Low self-esteem syndrome."

The prescriptions are notes with encouraging messages or recommendations for plays, movies or books aimed at cheering people up, depending on what is troubling them. Some have a map to a place for a pleasant stroll. The woman read about the vending machine in a magazine and decided to try it out after she lost her full-time job.

"I want to support the young in the sampo ("three 'give ups'") generation," said a representative of the Seoul Foundation for Arts and Culture, which operates the vending machine. The sampo generation refers to young people who are financially struggling and thus prone to abandon the idea of dating, marriage and children.

According to Statistics Korea, the unemployment rate for people between the ages of 15 and 29 was nearly 10% in 2017. The change of government has brought no sign of improvement so far. The vending machine by the theater has a lot of customers, apparently. More than half its prescriptions were sold out. This vending machine in a Seoul theater district offers "Remedies for the Soul."

A different type of vending machine aims to drum up business for small shops struggling to pull in customers. One sits in front of a sundries shop in a large commercial complex outside Seoul. The machine sells used books for 5,000 to 7,000 won. A sign on the machine explains that small bookstores are feeling the pinch because a large secondhand book chain is opening up stores around the city.

The dispenser was developed by the owners of nine secondhand bookstores in a well-known booksellers district, along with students at South Korean universities.

The books are packaged simply and customers choose by genre, such as suspense or romance, rather than title. Each book comes with a postcard that includes a photo of the store's owner. The postcard thanks the customer for the purchase and says the book can be exchanged at the shop for a different title if desired.

In 2008, there were a total of 15,623 food vending machines in Seoul. By 2016, the number had fallen by about 60% and many of the remaining ones began selling new products, such as flowers and bananas.

Now that it offers things like used books and good cheer, the humble vending machine may help fill a deeper void.