BANGKOK -- When a Bangladeshi woman working as a maid in Saudi Arabia wanted to return home last year for her son's funeral, her employers refused to let her go -- even though she was being forced to work without pay, and past the length of her two-year contract. Worse, her passport was being held by migrant labor recruiters and the fellow villager who had helped broker her Saudi job had vanished from sight.

Such so-called "middlemen" have long been a problem in Bangladesh, where grinding poverty is driving a growing number of rural women into domestic service in the Middle East. Lacking proper channels for recourse, many suffer in silence. But stories like this, told to the Nikkei Asian Review, come amid a growing push to bring the Bangladesh's uncounted and unregulated middlemen into the legal mainstream.

"It's high time to end this game, where middlemen and authorized recruiting agencies cooperate with a wink, so when a woman gets in trouble overseas, they can pretend it's the other's responsibility," said Sumaiya Islam, director of the Bangladeshi Ovhibashi Mohila Sramik Association, which supports the country's migrant domestic workers.

Bangladesh, the world's eighth most populous country and among the least developed, has 7.5 million citizens living outside the country -- the fifth highest national total, according to a 2017 report by the United Nations Population Division. Amid rising demand from the Middle East for female domestic workers, finding and processing migrant labor has become a big business in the country, with 1,300 recruiting agencies licensed by the government, and many others operating outside the law.

More than 500 licensed agencies specialize in finding domestic workers, according to Noman Chowdhury, a top official of the Bangladesh Association of International Recruiting Agencies. Yet nearly all are based far from the rural areas where most potential migrants live, and rely on a network of unregulated, unauthorized "dalals," who act as middlemen, identifying and introducing potential migrants. 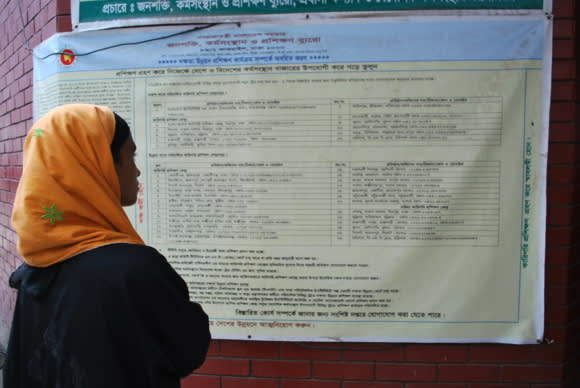 A Bangladeshi woman reads a poster about government courses to develop skills before going to work overseas. (Courtesy of UN Women)

"In the villages, where nearly all these women come from, they don't trust city people," said Islam. "If they see a neighbor building a new, large house with a salary sent from overseas, they will do the same and find the dalal -- no matter how many stories they hear about women who are cheated."

The first step in the cycle of migration for most Bangladeshi women begins with freelance operators working on commission. These middlemen -- male and female -- are usually fellow villagers, friends or relatives. Some are trusted, but most gain business because they are merely close-at-hand.

"They are adept at filling the women with false hopes and dreams," said Tapati Saha, a program analyst at the Bangladesh office of UN Women, which advocates gender equality. "Many times, there are not any jobs waiting for them. And if the women try to redress their grievances, the middlemen take no responsibility. As there is usually no written proof, they don't have to acknowledge anything, and little can be done."

People working to help female migrant workers say the women are often unable to read, access the internet or understand legal codes. According to Islam, desperate phone calls from BOMSA members in Saudi Arabia -- a key employer of migrant domestic labor -- have included one from a prison where a domestic worker was falsely accused of stealing gold from an employer who had not paid her, as well as Fatima, whose child had died.

"Cheating, trafficking, smuggling, selling body organs -- [some of] the middlemen do all of this," said Islam, citing an oft-repeated claim (which U.N. officials would not confirm). "The trouble is we have no way to differentiate between the bad and the good."

Her preferred solution is to authorize, supervise and regularize the informal recruiters. For two years, such an approach has been championed in petitions, media and government meetings by BOMSA and two allied women's organizations. Chowdhury, a 35-year veteran of the recruitment industry, works with both governmental and international agencies to improve protection for women migrants. But he admitted: "It's true that most of our members would not be able to fulfill the Middle East's demand for female domestic workers without the middlemen who bring them to us."

Until last year, there was a quota requiring two females for every male contracted, to meet demand. "Proper recruiters don't take money from the women, they get their profits from the employers," said Chowdhury. "But if middlemen take them directly to government training courses then we can't say whether they are charging a lot or a little."

Under these unsupervised circumstances, some dalals are said to demand gratuities of up to five times migrant workers' first month's pay, in addition to costs for permits, visas, medical exams and travel expenses. This often puts women in debt from the start of their employment. The Bangladesh government has established banking channels that can help by providing loans, but surveys show that few women use them, preferring to sell land or family jewels to finance their trips.

"The middlemen are able to operate because women more easily put their trust in other women," said Saha. "And while there was a stigma attached to women who tried to leave their traditional duties a decade ago, now it is far more accepted that their actions are beneficial, that they are acting with determination as heads of the family."

But determination is not often matched with knowledge. "Few of them would travel alone to recruitment agencies in Dhaka or be able to find their way to them," Saha said. Even if they are presented with a contract to sign, it is likely to be in Arabic and English, which few migrant workers understand.

Chowdhury said BAIRA is trying to counter the influence of the middlemen -- reaching into rural communities with job fairs and information. He also founded one of three private training centers in the country that offer better preparation for female migrant workers than a 21-day course required by the government's Bureau of Manpower, Employment and Training. "We have developed more effective audio-visual materials to reach the women, and some of them stay with us 24 hours a day for up to 45 days," Chowdhury said. Bangladeshi women receive basic training in the use of household appliances before they travel to the Middle East to take up domestic work. (Courtesy of UN Women)

Among the common challenges awaiting female domestic workers, Chowdhury cites "homesickness, change in food (because rice is often not available), too great workloads, verbal and sexual abuse." He has helped to push the Bangladesh government to demand higher wages and an obligatory day off each week for women working in Middle Eastern countries -- although holidays, he admitted, "are often useless since the women are not allowed to go outside without accompaniment."

Chowdhury also cites the relatively low number of 4,500 complaints from about 400,000 women sent overseas last year as proof that the system is becoming more responsive. While acknowledging that the number may understate the real level of the problem, he noted: "This is only a complaint rate of 1% ... though even that percentage is too high when we are talking about human beings."

Chowdhury said BAIRA is seeking to create a blacklist of abusive employers and wants to see broad action to improve conditions for migrant workers through an agreement between source and destination countries, based on newly-proposed Standard Terms of Employment drawn up by UN Women in conjunction with other agencies. "We all have to work together, all the sending countries and all the agencies, to build a consensus on such standards," he said.

Chowdhury also argued that time may resolve the most pressing problems in the female migrant worker industry, which is a relatively new phenomenon in Bangladesh. "While this is an opportunity for our country to help eradicate poverty, we must recognize that women's migration is less than a decade old," he said. "We are still a baby in this. Every day, we are learning to better protect our people."

The flow of migrants from countries such as Bangladesh, Nepal and Sri Lanka has been spurred in part by the sporadic withdrawal from the Middle Eastern market of former major labor suppliers such as Indonesia and the Philippines (which just banned its nationals from traveling to work in Kuwait after the widely publicized murder of a Filipina maid there). And they will continue to react to ongoing cases of abuse in spite of promised reforms in a traditional system known as kafala that makes migrant workers completely beholden to their sponsoring families.

However, activists said that efforts to improve conditions overseas are likely to be ineffective unless the abuses committed in Bangladesh by middlemen are brought under control. Saha argued, for example, that BAIRA's planned blacklist, though well-intended, would confront only the very worst behavior by employers without addressing the underlying causes. "How can we practice being ethical if the employers on the other hand aren't ethical?" she said.

The role of middlemen must be better regulated and made transparent, argued Islam, even as she admitted that ending the abuses would be difficult. "We don't have the manpower in our country to eradicate all these people," she pointed out. "Yet most of our members are crying out for this to end their physical and mental torture."