Soldiers and police unable to hold back the crowd 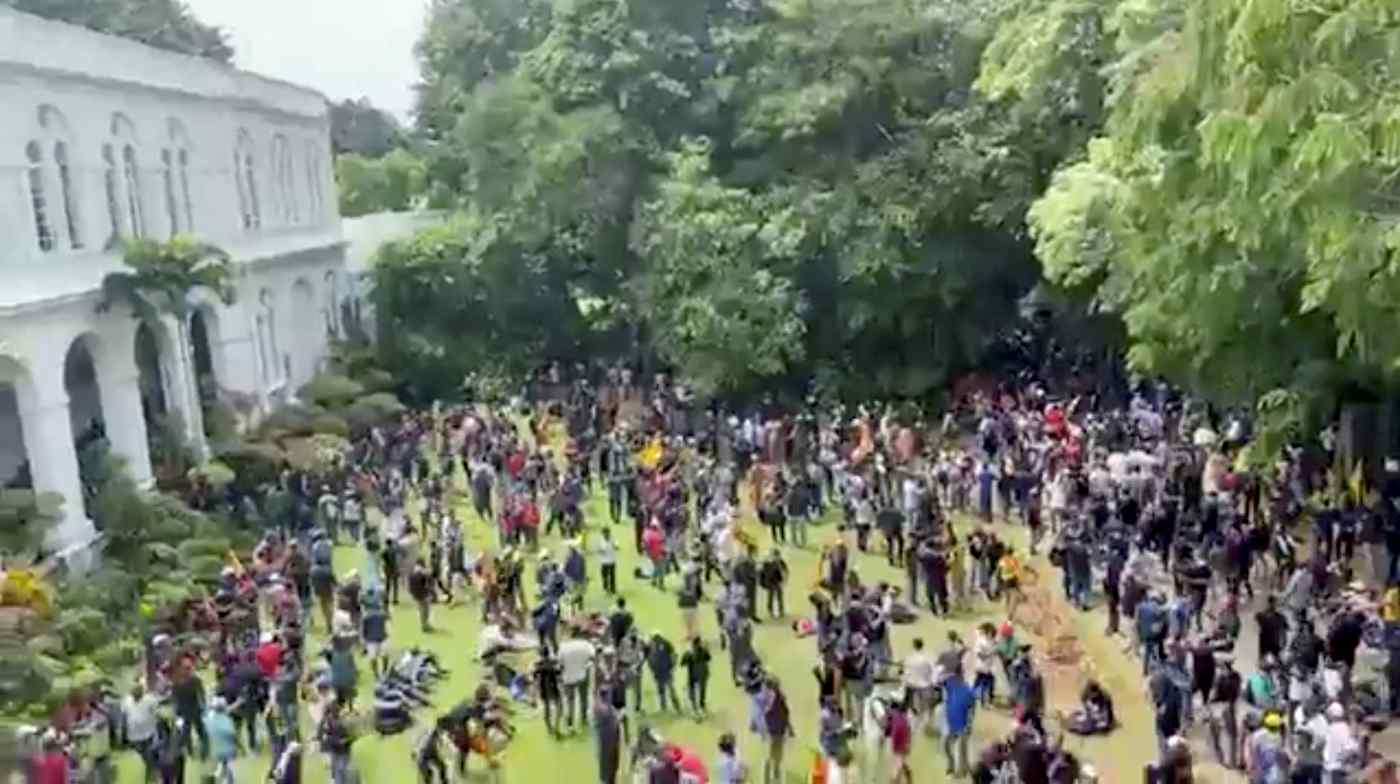 COLOMBO (Reuters)--- Sri Lanka Prime Minister Ranil Wickremesinghe is willing to resign to make way for all-party government, his office said in a statement on Saturday, after thousands of protesters stormed the president's official residence in Colombo.

Soldiers and police were unable to hold back the crowd of chanting protesters demanding President Gotabaya Rajapaksa's resignation, as public anger grows over the country's worst economic crisis in seven decades.

Protesters also forced their way through heavy metal gates into the Finance Ministry and the president's seafront offices.

Rajapaksa left the official residence on Friday as a safety precaution ahead of the planned weekend demonstration, two defence ministry sources said. Reuters could not immediately confirm the president's whereabouts.

"Wickremesinghe has told the party leaders that he is willing to resign as Prime Minister and make way for an all-party government to take over," his office said in a statement.

Wickremesinghe had also been moved to a secure location, a government source told Reuters.

Leaders of several opposition parties have also called for Rajapaksa to resign.

"The president and the prime minister must resign immediately. If that does not happen political instability will worsen," said Sri Lanka Freedom Party leader and former president Maithripala Sirisena, speaking before Wickremesinghe had offered his resignation.

A Facebook livestream from inside the president's house showed hundreds of protesters, some draped in the national flag, packing into rooms and corridors.

Video footage showed some of them splashing in the swimming pool, while others sat on a four-poster bed and sofas. Some could be seen emptying out a chest of drawers in images that were widely circulated on social media.

Hundreds milled about in the grounds of the colonial-era whitewashed residence, with no security personnel in sight.

At least 39 people, including two police officers, were injured and hospitalised during the protests, hospital sources told Reuters.

The Indian Ocean island of 22 million people is struggling under a severe foreign exchange shortage that has limited essential imports of fuel, food and medicine, plunging it into the worst economic crisis since independence in 1948.

Soaring inflation, which reached a record 54.6% in June and is expected to hit 70% in the coming months, has heaped hardship on the population.

Political instability could undermine Sri Lanka's talks with the International Monetary Fund as it seeks a $3 billion bailout, the restructuring of some foreign debt and fund-raising from multilateral and bilateral sources to ease the dollar drought.

"This is a dicey situation. If a clear transition is not put in place the president and prime minister's resignation will create a power vacuum that could be dangerous. The Speaker can appoint a new all-party government but whether they will be accepted by the protesters remains to be seen," said political analyst Kusal Perera.

The crisis comes after COVID-19 hammered the tourism-reliant economy and slashed remittances from overseas workers.

It has been compounded by the build-up of hefty government debt, rising oil prices and a ban on the import of chemical fertilisers last year that devastated agriculture. The fertiliser ban was reversed in November.

However, many blame the country's decline on economic mismanagement by Rajapaksa and there have been months of largely peaceful protests demanding his resignation.

Before breaking into the government buildings on Saturday, the protesters dismantled several police barricades in Colombo's government district.

Police fired shots in the air but were unable to stop the angry crowd from surrounding the presidential residence, the witness said.

Despite a severe shortage of fuel that has stalled transport services, demonstrators packed into buses, trains and trucks from several parts of the country to reach Colombo for the weekend demonstration.

Discontent has worsened in recent weeks as the cash-strapped country stopped receiving fuel shipments, forcing school closures and rationing of petrol and diesel for essential services.

Sampath Perera, a 37-year-old fisherman, took an overcrowded bus from the seaside town of Negombo 45 km (30 miles) north of Colombo, to join the protest.

"We have told Gota (Rajapaksa) over and over again to go home but he is still clinging on to power. We will not stop until he listens to us," Perera said.