Only trains, buses and other necessary vehicles allowed gas from Tuesday 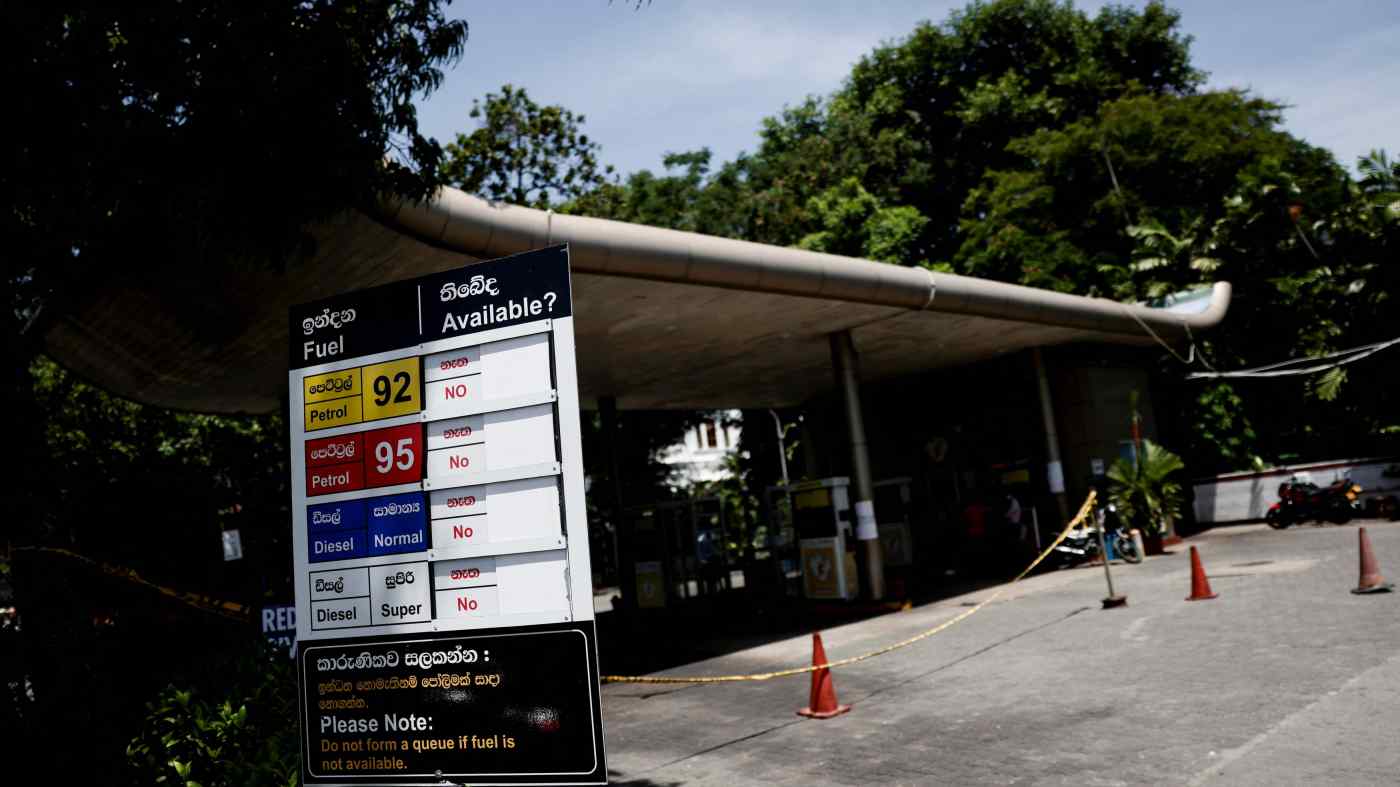 COLOMBO (Reuters) -- Sri Lanka will shut schools and only allow fuel supplies to services deemed essential like health, trains and buses for two weeks starting Tuesday, a minister said, in a desperate attempt to deal with a severe shortage.

Sri Lanka is suffering its worst economic crisis, with foreign exchange reserves at a record low and the island of 22 million struggling to pay for essential imports of food, medicine and, most critically, fuel.

Industries like garments, a big dollar earner in the Indian Ocean nation, are left with fuel for only about a week to 10 days. Current stocks of the country will exhaust in just under a week based on regular demand, Reuters calculations show.

Sri Lanka will issue fuel only to trains and buses, medical services and vehicles that transport food starting Tuesday until July 10, Bandula Gunewardena, the spokesman for the government cabinet, told reporters.

Schools in urban areas will be shut and everyone is urged to work from home, he said. Interprovincial bus service will be limited.

"Sri Lanka has never faced such a severe economic crisis in its history," Gunewardena said.

Autorickshaw driver W.D. Shelton, 67, said he had waited in line for four days for fuel.

"I haven't slept or eaten properly during this time," he said. "We can't earn, we can't feed our families."

The government is talking with the International Monetary Fund (IMF) on a possible bailout, but many people cannot wait that long and demand for passports has surged.

The navy in the early hours of Monday arrested 54 people off the eastern coast as they tried to leave by boat, a spokesman said, on top of 35 "boat people" held last week.

An escalation of the fuel shortage could lead to a fresh wave of demonstrations.

Opposition leader Sajith Premadasa called for the government to step down.

"The country has collapsed completely due to the fuel shortage," he said in a video statement. "The government has lied to the people repeatedly and has no plan on how to move forward."

Other big consumers are industries like apparel and textiles companies, whose exports jumped 30% to $482.7 million in May, according to data released on Monday.

"We have enough fuel for the next seven to 10 days, so we are managing," said Yohan Lawrence, secretary-general of the Sri Lanka Joint Apparel Associations Forum.

"We are watching and waiting to see if fresh fuel stocks arrive and what will happen in the coming days."

Sri Lanka's power regulator said the country was using its last stocks of furnace oil to run multiple thermal power plants and keep power cuts to a minimum. Scheduled power cuts will rise to three hours from Monday from two and a half hours earlier.

"We are hoping to keep power cuts at three to four hours for the next two months," said Janaka Ratnayake, chairman of the Public Utilities Commission of Sri Lanka. "But given the situation of the country this could change."

An IMF team is visiting Sri Lanka for talks on a $3 billion bailout package. The country is hoping to reach a staff-level agreement before the visit ends on Thursday that is unlikely to unlock any immediate funds.

It has received about $4 billion in financial assistance from India, and the Sri Lankan government said on Monday the United States had agreed to provide technical assistance for its fiscal management.