As business booms, many locals lament the loss of the city's heritage and old-world vibe Loud, colorful trishaws are a popular way for visitors to tour Melaka, but are something of an acquired taste, conservationists say. (Photo by Simon Roughneen)
SIMON ROUGHNEEN, Asia regional correspondentFebruary 4, 2018 13:30 JST | Malaysia
CopyCopied

MELAKA, Malaysia -- "Fun" is a subjective concept, as is the even more nebulous "culture." As for "heritage," it is a debatable term too, but can be more or less quantified by the range and antiquity of buildings and monuments that make up a place.

But how about cruising through a UNESCO World Heritage site in a garish Pokemon or Hello Kitty-decor trishaw, a speaker blaring Taylor Swift from the roof and exhorting passers-by to "Shake It Off," as a wizened driver struggles to pedal a cartload of tourists along a cobbled street toward the ruins of a 16th century church? Fun?

Going by the steady trade these trishaws do in downtown Melaka, a lot of people enjoy that jaunt. Indeed it is not only fun to many, but possibly cultural too, in some jarringly postmodern, Andy Warhol-meets-St. Francis Xavier (who visited Melaka) sense of the word.

It is hardly "heritage" though, not yet anyway. And to conservationists, these ponderous psychedelic cycles undermine the city's retro colonial and Peranakan Chinese shophouse ambiance, as do the soaring hotels that tower a bit too close to the main heritage zone.

"There are few tall buildings built exceeding UNESCO guidelines," said Bert Tan, a Melakan who helps run the Malaysian Heritage and History Club, a Facebook group with more than 18,000 members. Melaka and George Town, around 500km north, were together listed as UNESCO World Heritage Sites in 2008. The designation does not compel either city to restrict new construction or prevent over-commercialization and mass tourism, but entails, as Tan said, guidelines about how best to preserve the cities' heritage. The Melaka Straits Mosque is built on an artificial island and is a popular location for evening prayers and viewing the straits at sunset. (Photo by Simon Roughneen)

A Malay sultanate from the 14th to the 16th centuries, Melaka (also known as Malacca) was successively conquered by Portuguese, Dutch, British and Japanese occupiers before Malaysian independence in 1957, An influx of Chinese migrants from the 15h Century onwards produced another cultural layer, the Straits Chinese, sometimes called the Peranakan or baba-nyonya.

Like George Town, the city's history layers Islamic, Christian and Buddhist influences from near and far, all of which resonate through the local religious and cultural architecture.

"The influences of Asia and Europe have endowed the towns with a specific multicultural heritage that is both tangible and intangible," the UNESCO website says. "The two towns constitute a unique architectural and cultural townscape without parallel anywhere in East and Southeast Asia." On a busy weekend morning, people amble past one of the many Chinese temples on Jonker Street. (Photo by Simon Roughneen)

But in George Town, the past half decade or so has seen many of the city's old shophouses converted into "boutique" hotels and hipster-magnet coffee shops, where underdressed, pink-hued backpackers sit, armpits on display, next to laptop-enchanted local millennials.

That incongruous trend has spread south. "Melaka has already transformed itself toward the hipster cafe bar scene. The original people of the area especially in Jonker Street [the main street in old Melaka] has since moved out of the area," said Bert Tan. Backpackers solicit donations to fund their travels around Asia, on Jonker Street in Melaka. (Photo by Simon Roughneen)

Since 2008, visitor numbers to Melaka have more than tripled -- from 5 million to 16 million in 2016. Melakans need to earn a living from the town's thriving tourism business, the lifeblood of the local economy.

Just a two-hour drive from Kuala Lumpur and, depending on the often-congested border crossing, a three-hour drive or bus trip from global trade hub Singapore, Melaka is ideally located to attract travelers to the region.

Southern Malaysia has long attracted for Singaporean investment and property development. But the proliferation of big hotels and malls around the old core of Melaka could undermine the vibe that made the city a UNESCO World Heritage Site and a tourist draw in the first place. An old Protestant church stands next to the Stadthuys, the center of Dutch control of the town in the 17th century. (Photo by Simon Roughneen)

The Nikkei Asian Review contacted a dozen hotels and property developers operating around the center of Melaka, as well as two heritage-related government agencies, requesting an interview. Only three hotels replied and none agreed to talk about how the city's heritage affects business.

But conservationists are shaking their heads, citing gaudy additions such as Melaka's artificial canal and windmill, as well as the large shopping malls near the historic zone. Clement Liang of the Penang Heritage Trust said that Melaka "is fast becoming like a huge theme park for tourists, losing too quickly its old town's heritage authenticity."

Such inappropriate commodification is common to many world-famous heritage sites. Uluru, or Ayers Rock, in central Australia, has banned tourists from climbing the huge dome as part of a preservation plan that respects local traditions.

Further afield, heritage watchers warned that the ecology and ancient monastic ruins on Skellig Michael, a storm-lashed island off Ireland's southwest coast that is also a UNESCO site, could be undermined by a surge of Star Wars fans, many dressed as Chewbacca or Han Solo, trying to visit the island after scenes from the last two Star Wars movies were shot there. 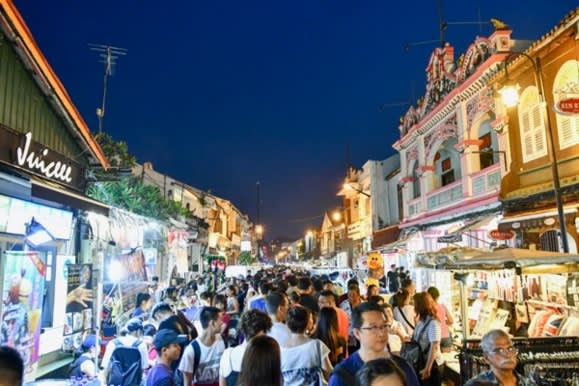 But despite some similarly lamentable commodification, the area around Jonker Street, a tourist-heavy thoroughfare thronged after sunset with a lively weekend night market, still has some of the old heritage look about it, and plenty of great nyonya food -- especially on market nights.

Nearby, several ornate Chinese temples, incense wafting on the slight breeze coming in off the Straits of Malacca, as well as numerous Peranakan-era houses. These are well worth a visit, as is the area around the 17th century Stadthuys Square, with its a Victorian clock tower and 17th century town hall, thought to be the oldest Dutch colonial building in Asia and formerly the center of colonial Dutch administration.

For a partisan history lesson replete with some stunning old photographs, visit the Democratic Government Museum, which sits, appropriately perhaps, on a hill overlooking a museum dedicated to the United Malays National Organisation, the all-conquering political party that has governed Malaysia for around a half century, albeit abetted by a gerrymandered electoral system. The ruins of St. Paul's church are a popular spot for visitors to Melaka. (Photo by Simon Roughneen)

Arguably best of all are the ruins of that 16th century church -- St. Paul's -- built by Portuguese colonists in 1521 and the oldest in Southeast Asia. At the foot of the hill below the church are the remnants of the old city wall and Portuguese military fort, and around 200 meters further along, set in a lush garden, is a full-size replica of the long-lost sultan's palace.

St. Paul's sits on a hill giving stellar views of Melaka at sunset, the gaps in the ruins allowing a photographer capture parts of the city vista alongside sepia-tinged old church brickwork -- and maybe even a four or five century-old epitaph to one of the Europeans interred under the church.

And for any visitor feeling drained after absorbing nearly a millennium of history, or by the humidity after walking up and down the hill, there is always a driver waiting below in a luridly patterned trishaw, who will happily pedal you back to your hotel.