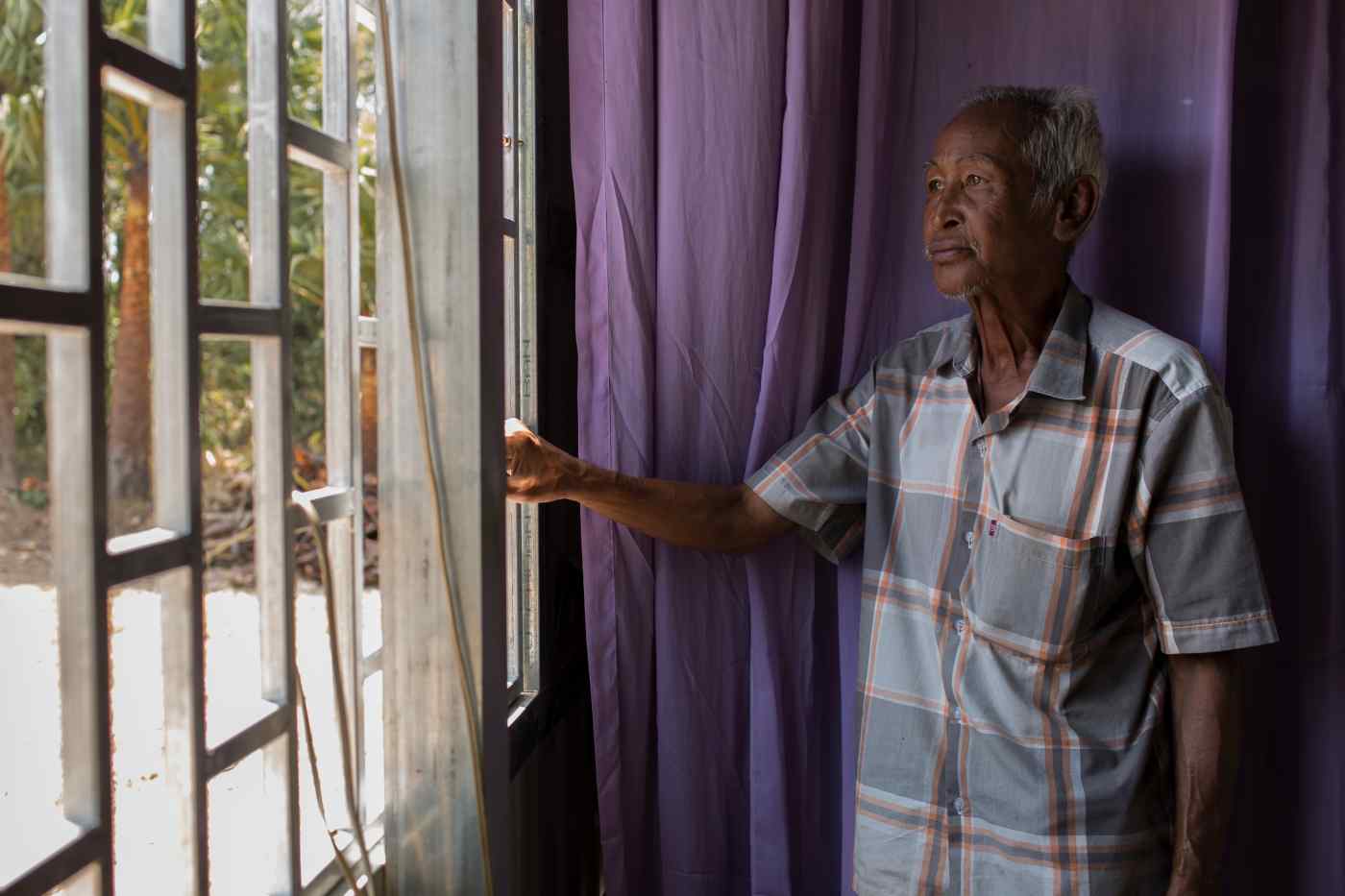 PHNOM PENH -- Sou Sotheavy has been sitting for barely 30 minutes when she lights a third cigarette, apparently unconcerned about the recent heart problems she has suffered.

"In 1978, I was forced to get married to a woman," recalls 77-year-old Sotheavy between puffs as she talked at a coffee shop in the Cambodian capital, Phnom Penh. The wedding was a biological and psychological clash: Sotheavy is a transgender woman (having since transitioned from male to female). She is also a survivor.

Born in Takeo province, Cambodia, she was 34 years old in 1975 when the Khmer Rouge regime took power and then renamed the country Democratic Kampuchea. The ideology of the new masters was an extreme interpretation of Maoist communism. Under the leadership of Pol Pot, the objective was the creation of a new society from the ashes of the old one.

In the three years and eight months of the Khmer Rouge rule (April 17, 1975, to Jan. 7, 1979) between 1.2 million and 2.8 million people perished, according to academic and official estimates. In what became an Orwellian state, the regime's doctrine was full of moral paradoxes: While "Angkar" -- the faceless body of the Khmer Rouge -- slaughtered its own children, some peasants were forced to get married and procreate. Sotheavy was one of the victims. "During the Khmer Rouge rule I hid my identity because I knew these people would discriminate [against] me," she says. Sotheavy has a visible limp. Her right leg is a reminder of Khmer Rouge excesses, when she was tortured, beaten and one day raped by 10 soldiers. She also lost her parents and 14 siblings -- who all perished under the brutal regime in those years.

Her case is not unique. According to Kasumi Nakagawa, a Japanese professor of gender studies at Pannasastra University in Phnom Penh, under the Khmer Rouge regime, "people belonging to sexual minorities such as lesbian, gay, bisexual and transgender [LGBT] people, were forced to experience specific forms of gender-based violence and sexual violence that were not experienced by the majority of Khmer people. In addition, the intersection of discrimination and perpetration of violence were affected by social status or religion," she noted.

In her research paper, "Gender-based violence against sexual minorities during the Khmer Rouge Regime," Nakagawa wrote: "For sexual minorities in Cambodia, disclosing gender-based violence perpetrated against them during the past conflicts is also [a] difficult process. It is recognized that they face discrimination and live with increased vulnerabilities and risk of violence due to their sexualities."

Southeavy has many scars from her difficult journey through life. She suffered physical violence when she was expelled from her family home by her parents when she was only a teenager. Sos Arifin, 31, works in a beauty parlour. Arifin is a member of the Cham ethnic group, a Muslim minority in Cambodia. (Photo by Enric Catala)

Sos Arifin, a 31-year-old transgender woman, shares similar personal experiences, despite being born after the fall of the Khmer Rouge, a reflection of entrenched prejudice in Cambodia toward LGBT people.

When Arifin was 17, her father, a Muslim community leader, ordered her out of the family house. She would not return until his death.

"My mind is female but my body is masculine. For this reason, I suffered discrimination," she says. Her blue contact lenses do not entirely disguise the pain in her eyes.

Arifin belongs to the Cham ethnic group. This community, the nucleus of the Muslim population of Cambodia, was particularly targeted by the Khmer Rouge. It is estimated that about 200,000 Cham, nearly half the group's members at the time, were killed under the regime.

Noy Sitha, a transgender man of 64, met his (female) partner during that period of upheaval. They have been together for 40 years. Both were internally displaced people. 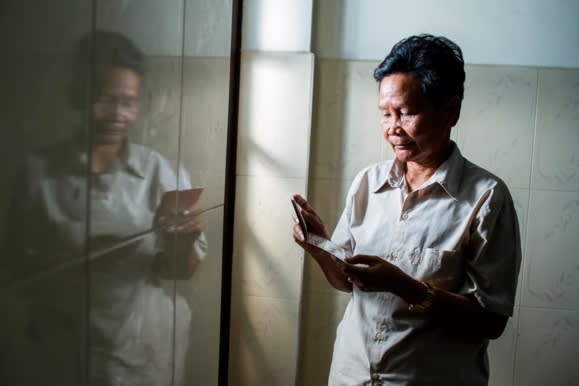 Noy Sitha, 64, looks at his Cambodian passport, where he is registered as a male citizen. Sitha has been together with his partner Hong Saroeun for decades. (Photo by Enric Catala)

"Every family had only four spoons of rice per meal a day," recalls Sitha about life under the Khmer Rouge. His modest house in Phnom Penh is decorated with photographs of happier moments from his life. He has not undergone sex reassignment surgery, but his passport records he is a man.

Next to Sitha, Pheng Sahn, a 65-year-old transgender man, fiddles with a small scarf -- a traditional, checkered Cambodian krama. Sahn, who makes the scarves, has substituted the red colors used by Khmer Rouge cadres for a rainbow palette.

Sahn remarks that, when he was a child, women yearned to stay at home. His own sexual revolution was to wear trousers at a time when it was mandatory for females to wear skirts. "I imagined that I had a [female] partner and I was her boyfriend. I used to wear my father's clothes," he says. Pheng Sahn, left, takes care of his wife, Un Phay, at their house. They came back from the hospital a few days ago and she is extremely weak. (Photo by Enric Catala)

While the men chat, in the next room a few women cook and wash the dishes. Though some genders might have switched, the patriarchal system in Cambodia is still reinforcing social norms.

In December 2012, in a rare sign of a liberal social attitude, Cambodian Prime Minister Hun Sen -- who has been in power for more than 30 years -- urged citizens to end discrimination against LGBT individuals. Nevertheless, according to Malen Long, a 27-year-old transgender man and activist, there are three main dimensions of the current struggle by Cambodia's LGBT community for acceptance: family, work and health. 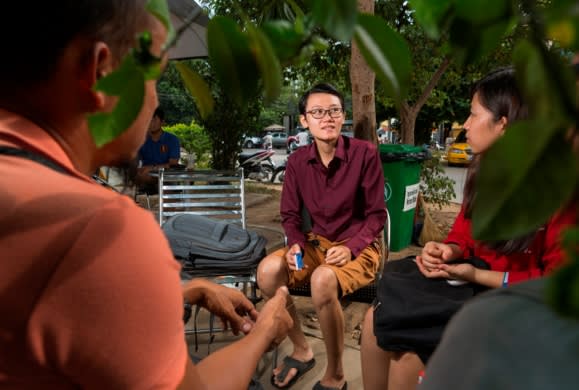 During their search for and discovery of their own sexuality, many teenagers in the country are still expelled from the family home. Long hopes this can change: "The family is like a skin, it must protect us," he says.

Van Chady, 23, regrets the lack of job opportunities. He is a transgender man and works selling soybeans and gas bottles on the street. His thin voice is drowned out by the noise of a nearby motorcycle repair shop. Whenever he applies for a job, he says, the employer will take on men and women but never transgenders.

In 2004, the late King Norodom Sihanouk called for respect for all people in society. As a liberal democracy, Cambodia should allow "marriage between man and man ... or between woman and woman," he said. The reality of Cambodia now, however, differs starkly from the late king's hopes. Activist Long says there has been no implementation of the then-monarch's suggestions. Currently, Cambodian same-sex couples do not enjoy the same rights as heterosexual couples.

Chhom Vy "Solony", 30, has obvious facial hair, although this does not get in the way of her coquetry as she begins her act on a Phnom Penh street. Within a few minutes, a curious crowd has gathered to listen to her as she starts a loop of sexual jokes.

Solony asserts that transsexuals like her, with visible physical signs of the opposite sex, bear the brunt of discrimination. Most transgender people do not go to the doctor because they feel embarrassed or uncomfortable. Often, she says, they are categorized as sex workers or criminals. 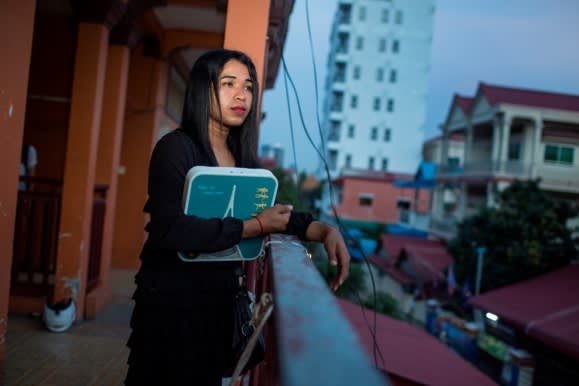 Chhom Vy “Solony” is an actress who also works with a local NGO raising awareness about HIV and LGBT rights. (Photo by Enric Catala)

This young actress defines herself as a woman although she has not had sex-reassignment surgery -- a step beyond her meager means. Giving herself the distinct name "Solony,"which she considers more "feminine," has helped define her new self -- a move to label her sexuality more boldly than earlier generations dared.

Absent mindedly, Sotheavy finishes another cigarette and again recalls her troubled past. "In the old times, people discriminated [against] me very much. They didn't even talk to me," she says.

Now Sotheavy runs a small non-governmental organization that offers counseling and support to LGBT people who dream of equality in Cambodian society.

Chady, Solony and Arifin were not even born in the turbulent period that Sotheavy and many others suffered through, but 30 years after the Khmer Rouge massacres, the search for their lost gender and sexual recognition continues.