This is no accident. Active public-private cooperation is watering those roots. Japan's government and companies have seen the success of South Korean dramas in the Southeast Asian country and are eager to catch up in the soft-power race.

Fans went wild on Feb. 24 when six female singers took the stage at Japan Myanmar Pwe Taw, an annual pop culture festival in Yangon. Four were members of AKB48 Team 8 -- one of the idol empire's many "teams" -- while the other two were from Bangkok-based sister group BNK48. They performed for about 30 minutes, including a rendition of signature AKB48 hit "Koisuru Fortune Cookie."

A 20-year-old woman, attending with five friends from a Japanese language school, offered her assessment of the performance: "Kawaii!"

Another woman, age 26, said, "I didn't know about AKB, but the song and dance are both fantastic."

This was the fourth Japan Myanmar Pwe Taw. The event in Myanmar's largest city is hosted by the Japanese Embassy and Japan International Broadcasting -- a subsidiary of public broadcaster NHK -- among other entities. Japanese companies that do business in the country, such as Kirin Holdings and Acecook, also took part.

The organizers estimated this year's attendance at 12,000, including Yangon residents and Japanese nationals staying in the country. Performing for the second straight year was PrizmaX, a five-member Japanese boy band that features a Myanmar-born lead vocalist, Win Morisaki. The 27-year-old sparked loud cheers when he addressed the crowd in Burmese.

Separately, Morisaki appeared in the film "My country, My home," which was produced by JIB and local broadcaster Myanmar National TV. The movie tells the story of a high school girl looking for her identity between Myanmar and Japan.

Through Facebook, Morisaki has developed a large following of young female fans in Myanmar over the past year. "The way he speaks Burmese is so cute," a 28-year-old Yangon woman said.

Myanmar's shift to civilian rule in 2011 has given the public unprecedented access to entertainment from abroad, be it on TV or online. South Korean dramas have become trendsetters for youth fashion and makeup. Japan is striving for a similar impact with its public-private collaborations. 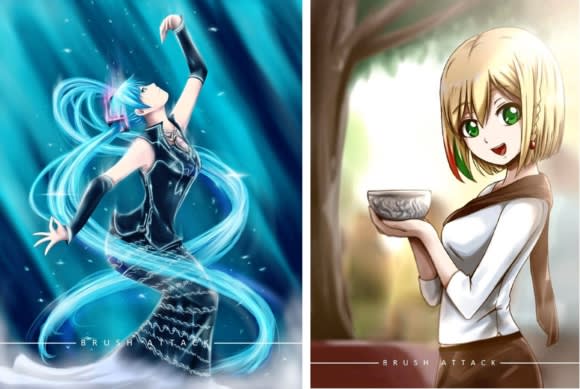 Wai La, the Myanmar artist who created these images, was influenced by anime. The one on the left shows Hatsune Miku in Myanmar garb; the other evokes the style of manga. (Brush Attack © CFM)

The growing influence of Japanese pop culture is showing up in other ways, too. Consider the work of Wai La, a Myanmar digital artist who goes by the name Brush Attack.

The 27-year-old's comic book series "Amalon," set in the fictional city of New Yangon, shows clear traces of Japanese manga styles. The series depicts high school girls who move back and forth between a virtual world and reality. The complex culture and history behind 'K-beauty'

Wai La took an interest in Japanese anime at around age 10. He taught himself to draw, at first, by imitating anime characters.

Today, he delivers his own comics online and designs game characters. Just for fun, he draws characters such as Hatsune Miku -- a Japanese virtual pop star who sings by way of a vocal synthesizer -- decked out in traditional Myanmar clothing.

Wai La said more than 10,000 people belong to a Facebook group he manages for exchanging information about his work and other topics.

"Japanese comics," he said, "are increasingly getting popular in Myanmar."