Myanmar's living royals reclaim their past

Descendants of the last king, featured in a new film, enjoy growing renown 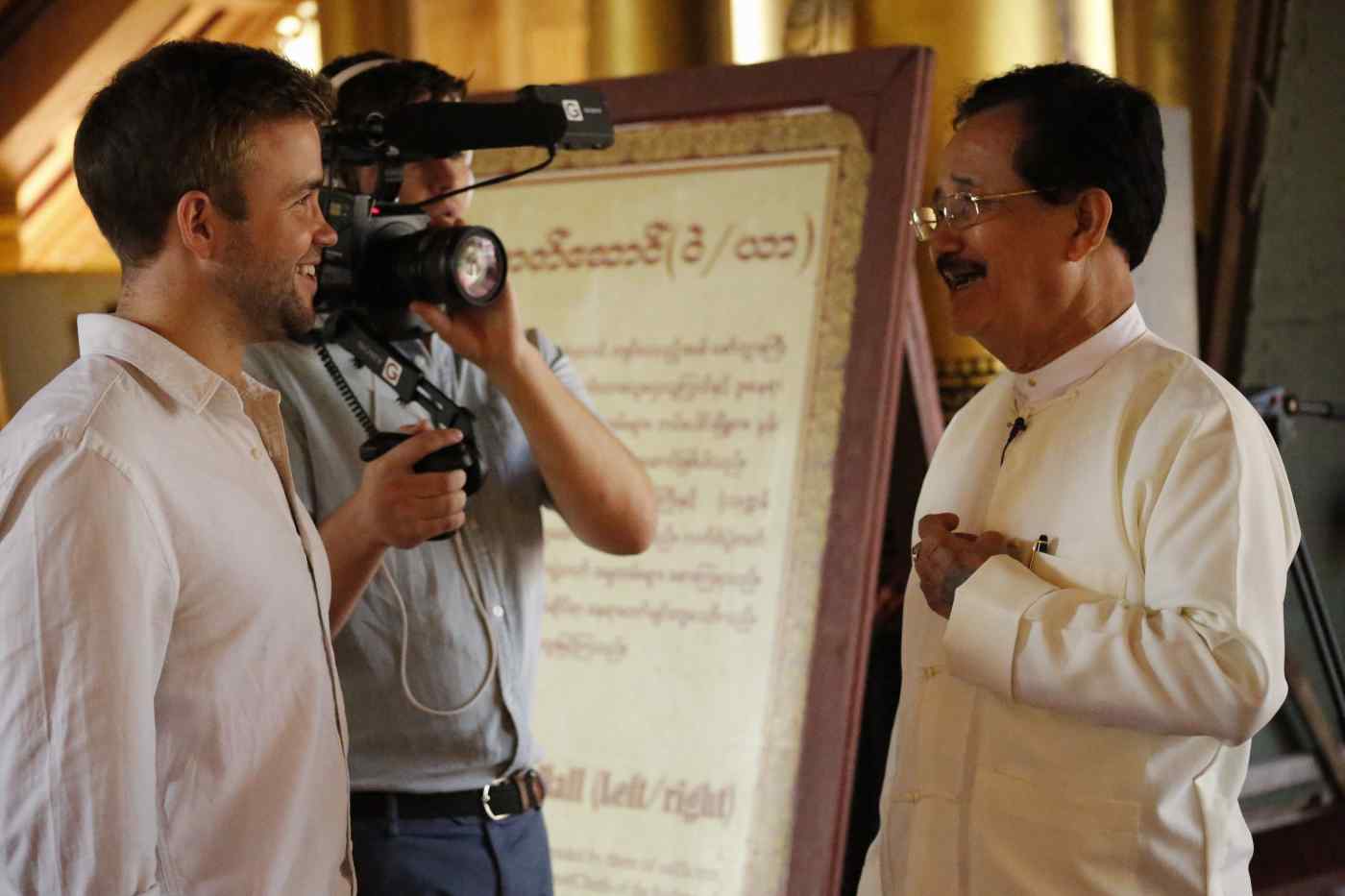 MANDALAY -- "Imagine how angry you would be if you knew you were in a history's whisker of being the king of a country," said 30-year-old British filmmaker and Myanmar history enthusiast Alex Bescoby.

He was speaking at the Myanmar premiere of his new film, completed earlier this year with an old school friend, about the living descendants of the country's last royal family. Before the British conquered what they called Upper Burma in 1885, young King Thibaw had ruled over a proud Buddhist kingdom. His palace walls stood a mere 10-minute walk from the grounds of the venue in northern Mandalay where Bescoby had screened his film at the fourth Irawaddy Literary Festival in early November.

The star of "We Were Kings" -- and a man who might have ruled over Myanmar -- is Soe Win, a 70-year-old retired civil servant. His grandmother, Hteik Su Myat Phaya Galae, was the fourth-born princess in the deposed court of the Konbaung dynasty, making Thibaw his great-grandfather. As Soe Win rose through Myanmar's foreign service between 1972 and 2007 -- taking postings in Washington, Hong Kong, Beijing, and Tokyo -- he kept quiet about his family. "During those days, no one was interested," he told the Nikkei Asian Review. 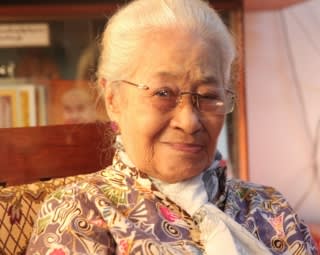 Soe Win's aunt Hteik Su Phaya Gyi, known as Aunty Su, also attended the film's in-country premiere. Though 95 years old and confined to a wheelchair, she retains a mischievous wit and speaks mission-school English in ringing tones. She spent much of her childhood in the coastal backwater of Mawlamyine in south-eastern Myanmar. The British had moved her mother, known as the "Fourth Princess," to the town with her children after she had the audacity to petition in 1930 for the old Mandalay palace and its treasures to be restored to her family. The Fourth Princess herself grew up mostly in exile, alongside Thibaw, in the Indian port town of Ratnagiri.

Myanmar's history since its independence from Britain in 1948, blighted by decades of military rule, saw the royal family sink into further obscurity. Mumbai-based historian Sudha Shah, who has written about Thibaw's twilight years of Indian exile, told the Nikkei Asian Review that, before the country's 1962 military takeover, Prime Minister U Nu had toyed with enlisting Thibaw's grandchildren in his Buddhist-centric nation building project, at a time when communism was spreading through the countryside via armed insurgency. But when the military saw the adoration the royal descendants received in public, they felt threatened. "They didn't want any monarchism," recalled Aunty Su. "We were just ignored."

Soe Win's keen sense of historical injury was no doubt heightened by recent events across the border in Thailand. In October, the Thai government lavished 3 billion baht ($92 million) on a cremation ceremony for the late King Bhumibol Adulyadej. The capital, Bangkok, ground to a virtual halt as devoted Thais and foreign dignitaries paid their last respects. Last year, Forbes Magazine estimated the crown's wealth surpassed $30 billion. A new constitution, promulgated in August, confirms the Thai monarchy's privileges: above politics, and protected from all criticism on pain of imprisonment. In stinging contrast to the dizzying wealth and towering authority still enjoyed by Thailand's Chakri dynasty, the remnants of Myanmar's Konbaungs were made dependent on the charity of the British administration and its post-colonial successor. "The British kept us very well," Aunty Su admits, with handsome allowances, top education for the children, and "a house of two and a half acres, full of vegetables and beautiful flowers." However, under the socialist regime of General Ne Win, beginning in 1962, support for the family was pulled. "We had to go out and work," she said.

One of Britain's more insidious legacies is the tattered reputation of King Thibaw himself. British imperialists often ran smear campaigns against rulers before snatching their realms. The last nawab of northern India's Awadh, for instance, was painted as "excessively debauched." In Thibaw's case, the colonial press ran gossip about the king's insatiable lust for gin. The aim was both to undermine confidence in Thibaw's capacity to rule, and to cast him as a "bad Buddhist" in the eyes of his subjects.

In the decades since Myanmar's liberation from British rule, there has been no public reappraisal of the country's last king. Though few in Myanmar would actively denigrate Thibaw, he is still widely viewed as a "useless ruler," according to Aunty Su, for failing to do more to protect the country's sovereignty. Few streets or monuments bear his name, in contrast to prior kings. Historian Sudha Shah insists that Thibaw "wasn't as bad an administrator and king as he was made out to be, and there is enough proof that he never drank."

Old British propaganda continues to colonize minds in Myanmar even today, and is symptomatic of the broader degradation under military rule of Myanmar's schools and universities -- once the envy of Southeast Asia. As a result, Soe Win noted, there is no "philosophy of history" -- that is, little sense of how Myanmar's past is connected to its present. Instead, a rote-learning mode of instruction has students snoozing through a dry litany of Myanmar kings and stilted accounts of their religious and martial exploits. 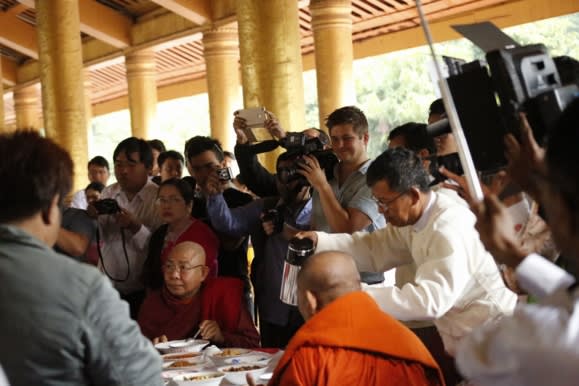 Bescoby, who first visited Myanmar on a research grant in 2008, said he wanted to make a film that helped explain today's Myanmar "by going back to 1885," the year that Britain snuffed out Myanmar's independence in a woefully one-sided war. During the international premiere of "We Were Kings" in September in London, audience members expressed deep shame over Britain's past cruelty. Yet, Bescoby said, what he really wanted was for people outside to come away with a stronger empathy for Myanmar and a willingness to engage with the long-isolated country.

Soe Win resents much of the British legacy in Myanmar, and blames colonial policies of "divide and rule" for the last half-century of conflict waged between the Myanmar military and ethnic minorities seeking autonomy. Nonetheless, he professed, like Bescoby, a desire for greater "friendship" between the people of Britain and Myanmar that transcends their bitter history.

The film project began cautiously, with scenes shot in private homes, but it went on to document the royal family's growing celebrity in recent years. In November 2016, the royal descendants were permitted to gather with Buddhist monks on the grounds of the old palace in Mandalay to commemorate their fallen dynasty, in a ceremony that drew unprecedented media attention to Soe Win and Aunty Su, along with her brother Taw Phaya, the titular head of the House of Konbaung, and Devi Thant Cin, Aunty Su's niece and a prominent environmentalist. Previously, family members had held small, private versions of this pardawmu ceremony in Yangon. Taw Phaya, the grandson of the last king of Burma (Courtesy of Grammar Productions 2017)

The spotlight intensified when, the next month, the film crew accompanied Soe Win on a trip to India to mark the centenary of King Thibaw's death at his burial site in Ratnagiri. Soe Win had made an earlier trip in 1993, but Myanmar's military junta required that it be kept quiet. This time, however, Myanmar's powerful military chief Senior Gen. Min Aung Hlaing and Buddhist monks including senior monastic leader Sitagu Sayadaw flew over to attend the ceremony.

Soe Win, whose patriotic efforts in retirement have included a stint managing Myanmar's under-19 football team, intends to dedicate his remaining years to the repatriation of Thibaw's remains. This is, in some respects, a lonely quest. In one of the film's more intimate scenes, Soe Win and his cousin Devi Thant Cin quarrel, with Devi dismissing his endeavor as perverse amid Myanmar's myriad contemporary problems. Although support for bringing back the king can be seen on Facebook, it has yet to coalesce into a high profile campaign. 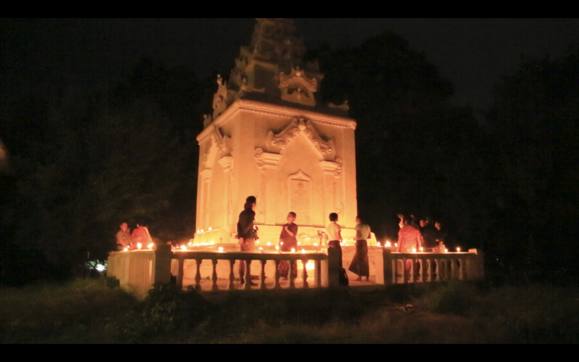 Devi Thant Cin, the great-granddaughter of the last king, participates in a remembrance ceremony at the tomb of the last queen in Yangon. (Courtesy of Grammar Productions 2017)

Nonetheless, Soe Win is content to play the long game, and expects the challenge will ultimately be left to future generations. "The government will realize one day," he said ruefully, "but at present they are quite busy." In the meantime, he is heartened by the growing local interest in the country's lost royal heritage, which has been enabled by the greater freedoms of recent years. As Sudha Shah says at the conclusion of Bescoby's film, "a reclamation of the past is now possible."