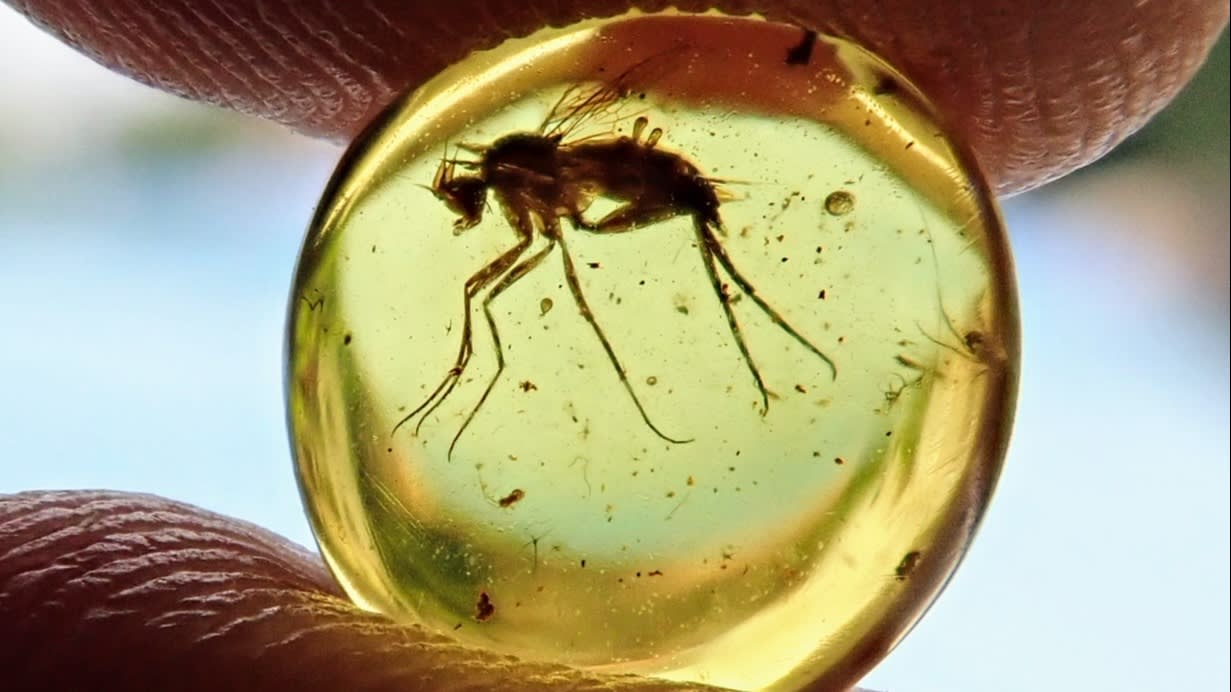 YANGON -- Myanmar is a major producer of amber, a fossilized tree resin. Amber is valued for jewelry, and also serves as a sort of time capsule that provides scientific clues to prehistoric life with fossilized inclusions such as insects, birds and dinosaur footprints.

Meanwhile, the main amber-mining areas in the country are located in an internal conflict zone where an ethnic minority is fighting against the national armed forces, and the amber also comes with problems of human rights violations and smuggling.

"Jurassic Park," a 1993 film directed by Steven Spielberg, has a scene at the beginning in which blood is collected from a mosquito entrapped in amber, in order to restore a dinosaur's deoxyribonucleic acid (DNA), with dinosaurs subsequently resurrected in a island theme park.

In reality, DNA is lost over tens of millions of years, so reproducing dinosaurs from fossils in amber remains a fiction.

However, since tissues like skin and wings are preserved better in amber, compared with normal bone fossils, they provide valuable clues for research. An ancient creature fossilized in amber, which is formed from tree resin. (Courtesy of the Myanmar Amber Museum)

In recent years, a series of such discoveries has occurred in Myanmar. In March 2020, a research team led by Xing Lida, an associate professor at the China University of Geosciences, Beijing, announced in British scientific journal Nature that they had discovered the head of a small new dinosaur species, resembling a bird, inside some amber.

The animal lived about 99 million years ago, in the Cretaceous Period. The head is about 1 cm long, and the estimated length of the dinosaur is the shortest among known fossilized dinosaurs from the Mesozoic Era. It had many small, sharp teeth.

Xing's team attracted attention in 2016 when they discovered a feathered dinosaur tail locked in amber from Myanmar. The team has also found chicks and an infant snake.

Depending on where the mine is, the age when the amber was formed differs. "Amber is produced more along the coasts of the Baltic Sea," said Long Roger, curator at the Myanmar Amber Museum in Yangon. "But amber produced in Myanmar comes from the Cretaceous Period when dinosaurs lived, and it gives us a lot of clues about the ecology of that period."

Not only animals and insects are found in amber. George Poinar, a professor emeritus at Oregon State University -- the one who influenced the novel on which "Jurassic Park" was based -- in 2017 discovered flowers of about 5 mm diameter in amber from Myanmar. 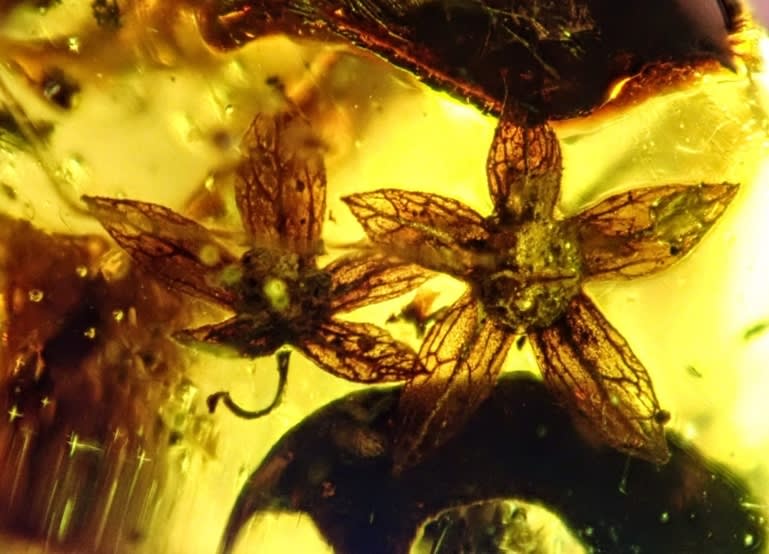 Fossil flowers retain their shapes in amber. (Courtesy of the Myanmar Amber Museum)

While amber is scientifically significant, it is also valuable as a jewel. Exports of amber jewels from Myanmar to China began in the first century. The route of amber trade remains unchanged today.

Most of Myanmar's amber is mined in the Hukawng Valley in the country's northern state of Kachin. They are transported through Tanai, a town known for its jewelry trade; then to Myitkyina, the state capital, or Tengchong in China's Yunnan Province, and are purchased by Chinese merchants. Gem mining, a big business, has been a source of ethnic conflict. In Kachin State, the conflict between the Myanmar national armed forces and the Kachin Independence Army (KIA), the armed group of the Kachin people, has continued for over 70 years since Myanmar (formerly known as Burma) became independent from British rule.

The national armed forces claim to fight for the country's unification, while the KIA seeks autonomy for its ethnic group, but a struggle over their interests in the mining areas for jewels like amber and jade underlies the continued conflict.

A journalist who lives in Myitkyina said, "Both the army and the KIA are directly involved in mining business through companies related to them and are collecting unofficial transit duties during transportation [of the mined stones]." Amber jewels on display at a jewelry store in Myanmar.

The national armed forces recaptured control of Tanai and surrounding areas from the KIA in June 2017, according to local news site Irrawaddy. However, sporadic fighting continues. Internally displaced people who were driven from their farmland have worked at gem mines, and many lost their lives in landslides at the mines.

Myanmar began to move toward democratization in 2016, when the current government, led by State Counsellor Aung San Suu Kyi, came into power. Shortly afterward, however, the government faced severe criticism over how it has handled the Rohingya ethnic group, a minority Muslim group.

Although the amber mines are far from where the Rohingya lived, it reminded the world that the country is still embroiled in ethnic conflicts.

The New York Times reported in March this year that one paleontologist had boycotted the purchase of amber from Myanmar. Foreign researchers are not permitted to enter the amber mines, due to the continuing conflict in the surrounding areas. 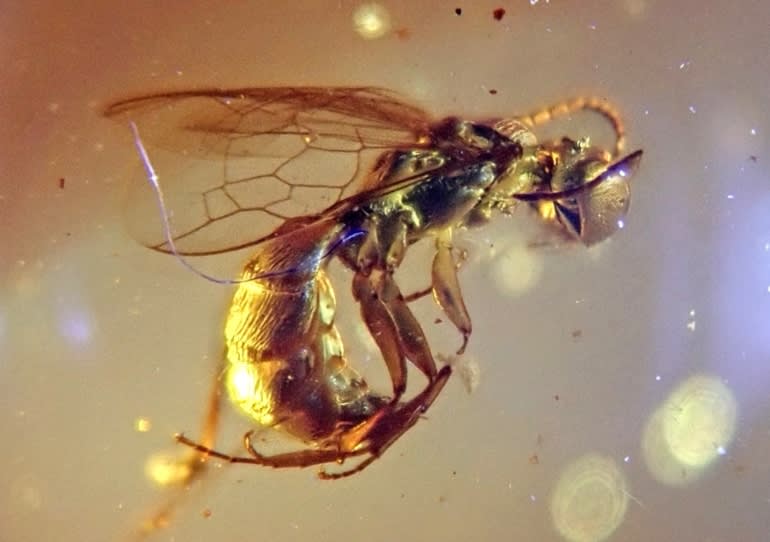 An insect is seen perfectly captured in amber. (Courtesy of the Myanmar Amber Museum)

To obtain amber, they have to purchase it from jewelers, but this may indirectly fund the conflict. The Society of Vertebrate Paleontology in the U.S. issued a statement in April asking editors of scientific journals to be more careful when reviewing papers dealing with fossil specimens from conflict regions, quoting the New York Times article.

However, scientific research is likely to suffer if amber containing insects, which commands high prices as jewels, is purchased by individual collectors. Paleontologists thus have some deep thinking to do in order to strike the right balance between science and ethics.