The numbers of siamese, khaomanee and other breeds are falling BANGKOK -- The siamese cat is one of many felines indigenous to Thailand. It is also one of the world's most recognizable breeds, with its blue eyes, creamy coat and black "mask," ears, legs and tail.

But the number of these cats is shrinking; the populations of siamese and Thailand's other native cats have been going down year by year.

In Thailand, it is highly unlikely that a siamese cat will ever cross your path.

At a pet show, fair and sales exhibition here in the capital of old Siam, Artitaya cuddled her siamese cat and proudly described the pet as smart, very independent-minded and recalcitrant.

"But that is the very appeal," she said.

There was even a cat contest, but the number of Thai cats that were entered was fewer than that of Persian cats, American shorthairs and other non-native breeds. Judging by the event, it seems as though siamese cats are going out of favor.

Yet the number of pet owners in Thailand is, like the middle class, on the increase.

Issariya Rattanaweerawong, one of the event's organizers and a Thai cat researcher, lamented that "interest in Thai cats that have existed since ancient times remains low as pet owners shower their attention on exotic, foreign cats."

There used to be 23 cat breeds native to Thailand, according to sources like the "Tamra Maew," or Cat-Book Poems, which is really a collection of manuscripts that is believed to date back to the 18th century. Of these, 17 breeds were considered to "bring good luck." 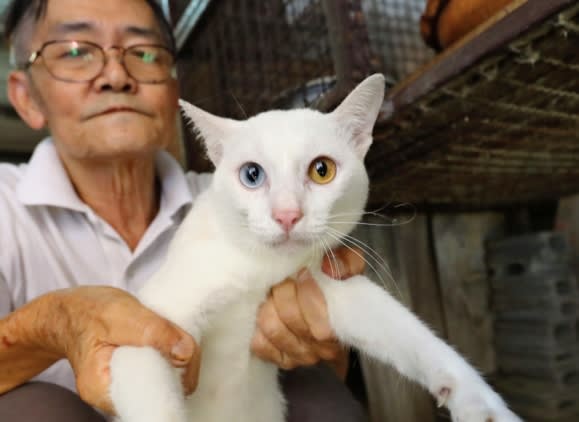 A khaomanee flashes its different-colored eyes.

Today, however, interest in these cats is waning. As more natural breeding takes places, there are now only five or so Thai cat breeds in existence, such as the silver-blue Korat, Rattanaweerawong said.

Panarat Kamchat, who heads the Thai cat breeders' association, thinks "now is the time to strongly stress the necessity of taking action to maintain the Thai cat bloodline." The 29-year-old said that if things are left as they are, "it will be too late."

Reckless breeding and inbreeding by ill-informed breeders can only result in harm to cats' health and smaller populations. Kamchat and her ilk believe that improving knowledge is essential, so a few years ago they began sharing information on cats' lineage through a network of breeders. They also began organizing events to promote the charms of Thai cats across the country.

"My dream is to have native cats of Thailand be officially recognized by an international pedigree registration agency."

Thai cats were popularized around the world by King Chulalongkorn, or Rama V, the great-grandfather of current King Maha Vajiralongkorn.

King Chulalongkorn is known for putting the country on the road to modernization. In the latter half of the 19th century, he gave a Thai cat to a British diplomat on the last day of the envoy's mission.

The cat would go on to win high marks at a fair, then draw the attention of cat fanciers in the U.S. and Europe. It gave rise to a Thai cat boom in these regions.

Later, a special hybrid Thai cat with a slender body and high nose became popular in the U.S. and Europe. The variety was brought to Japan during the Meiji era (1868-1912), Kamchat said.

Thai cats can also be found at sacred sites in Thailand. One of these is Wat Thong Noppakhun, on the Thonburi bank of the Chao Phraya River in Bangkok.

On the back wall of the temple's main hall, a huge mural depicts two white cats sitting like a pair of komainu -- the lion dog statues that guard the entrances to shrines in Japan. Behind them are piles of Buddhist scriptures.

So what is a cat mural doing on a wall of a sacred temple?

According to a monk, cats have been kept at temples since early times because they "drive off mice, which would otherwise be free to nibble away at important scriptures."

Those in the mural are khaomanee, which means "white gem" in olden Thai. The breed has recently been gaining overseas popularity for its mysterious look.

Soonthon Cherdchootham, a 69-year-old breeder in the central Thai province of Nakhon Pathom, an hour or so drive from Bangkok, said he sends khaomanee kittens to Denmark, each priced at 10,000 baht ($290).

The breed was once exclusive to Thai royal palaces, their existence a closely guarded secret. They were lavished with care and affection; crossbreeding was banned.

They have different colored eyes -- one blue, one golden -- which makes them look as though they possess magical powers.

"I want to contribute to the preservation of these precious Thai cats," said Cherdchootham, who manages his breeding program on his own.

"And," he added, "I want more people to know their beauty."

Back at Wat Thong Noppakhun, I notice a khaomanee newborn napping in a box. The monk offers to give me the kitten, and I am instantly fascinated. I do my best to hold back my desire and leave the temple. I am a dog person, after all.

But at Wat Thong Noppakhun, a cat won my heart.