TOKYO -- With growing instability in financial markets and decent returns on traditional financial products ever harder to attain, many investors are turning to an unlikely source in order to diversify portfolios.

Catastrophe bonds, commonly referred to as cat bonds, do not take risks on volatile price movements of traditional financial products, such as stocks and other types of bonds. Instead, they take risks on earthquakes, typhoons and other natural disasters. Investors can earn returns on the principal in full with interest, if no disaster occurs before maturity. 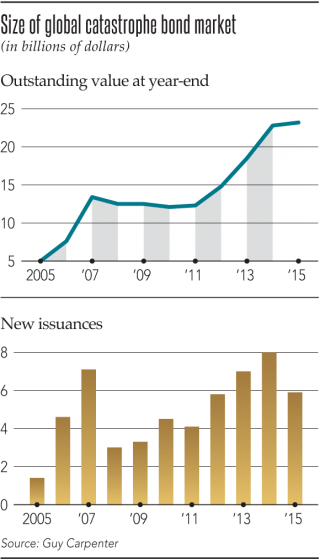 Outstanding balances of cat bond funds in Japan totaled 227.3 billion yen ($1.93 billion) at the end of last December, according to a Nikkei survey of six financial institutions, marking a 59% in the past two years.

In Japan, issuers of the debt instrument are mainly nonlife insurers. To diversify risk, the issuers usually set up a cat bond fund to invest in more than one potential claim holder. Corporate pension funds and wealthy individuals are among those pouring money into the cat bond market, in a bid to increase diversity in their asset portfolios.

Reinsurer Swiss Re estimates that total returns of the overall catastrophe bond market are averaged in the upper-3% range.

Active inflow of money has been weighing on yields on cat bonds. However, they remain an attractive option in Japan, where the yield on newly issued 10-year Japanese government bonds, a benchmark for long-term interest rates, fell below 0.1% after the Bank of Japan's negative interest rate policy was announced on Jan. 29.

John Wells, chairman at London-based investment manager of cat bonds Leadenhall Capital Partners, said that the company has been performing well because of low frequency of natural disasters in recent years. It has also helped cat bonds to attract new investors, he added.

Sumitomo Mitsui Asset Management has been managing a fund focused on cat bonds as it receives investment advice from Japanese major nonlife insurer Mitsui Sumitomo Insurance. After the launch, it took only one year for the fund to build up some 5 billion yen in assets under its management. The investment value averages about 1 billion yen per company in its portfolio. An official at Mitsui Sumitomo Insurance said that investors are very keen on the fund, as it offers an interest of just over 3% in yen terms.