Ambitious Indonesian farmers put Java back on the coffee map PANGALENGAN, Indonesia -- When Wildan Mustofa ventured into the burgeoning specialty coffee market six years ago, he had already built a successful potato farming business on his plantations in the chilly highlands of Bandung, West Java. The new undertaking, though, took time to bear fruit.

"I wasn't very successful at first," said Mustofa, 50, standing 1,300 meters above sea level on Mount Riunggunung, where his coffee trees grow. "In 2015, I sold very good coffee through an exporter for a price of a lower grade."

Buyers were simply not familiar with coffee from West Java. Although Java itself is closely associated with coffee -- as in "a cup of Java" -- the region has long ceased to be a popular source of the crop. The western island of Sumatra is now the center of Indonesian coffee cultivation, and is known in the industry as a major source for Starbucks.

Overall, Indonesia lags behind Brazil, Colombia and Vietnam by coffee production volume. Not only that, but almost 90% of its production in the 2016 marketing year was Robusta -- beans commonly used for instant coffee and sold for about half the price of higher-quality Arabica.

Still, ambitious growers like Mustofa, who will be marking his fourth harvest this year, might just help the country become a more serious competitor.

"Buyers initially wanted my coffee to substitute for Sumatra when the harvest ended there," Mustofa said. "But when I sent it to them, they understood that it is very different. It tastes even better."

Waking up the world

In the world of specialty coffee, buyers closely scrutinize the sorting, washing and drying of the highest-graded Arabica beans. And so far, funding constraints and growing techniques have limited the expansion of Indonesia's specialty segment, leaving much of the production to farmers with small plantations. But Mustofa is on a roll. Ranking highly at "cupping" contests in Australia and fetching high prices at U.S. auctions burnished his reputation. Last year, he courted several high-profile foreign buyers, including one in Norway. His beans have made their way to gourmet merchants such as Camel Coffee, which operates import specialty store chain Kaldi Coffee Farm in Japan.

One shop describes his coffee as having a "soft and flowery aroma, rich flavor and chocolaty aftertaste."

Overseas buyers snapped up about half his harvest last year. Mustofa's plantation area has expanded from 15 hectares to 60 hectares, encompassing four different estates in Bandung. Mustofa is not the only success story in West Java. Ayi Sutedja, whose plantations are only a few kilometers away from Mustofa's, attracted the highest bid of $55 per kilogram at an Indonesian coffee auction in Atlanta in 2016. They are starting to rival well-established brands from elsewhere in the country, such as North Sumatra and South Sulawesi.

And their rise has set the stage for Java's revival as a premium source -- for the first time in some 130 years.

The Dutch brought coffee seeds to Indonesia in the early 1700s, seeking suitable land to meet rising demand back home. By the turn of the century, Java had become the largest source of high-quality Arabica beans for the European market. Eventually, the region became synonymous with the word coffee.

But after a rust plague wiped out much of the crop around the 1880s, West Java's Arabica trees were replaced with a species called Robusta, which is more resistant to disease. Tea plantations also spread.

"Traces of [West Java] as the birth mother of Java coffee, the most popular coffee in the world, were gradually forgotten," said Prawoto Indarto, an author of books on coffee and tea. "Recently, people began to remember that there is coffee here."

Rising demand for gourmet coffee, both domestically and internationally, is helping the revival take root. Nearly 60% of the coffee the U.S. consumes is specialty grade -- the best Arabica beans, with a distinctive and consistent flavor -- according to the country's Specialty Coffee Association. The ratio is up from 40% in 2010.

In Indonesia, where a cup of instant coffee typically goes for 3,000 rupiah (22 cents) at food stalls, high-end cafes are popping up in major cities as well. One avid customer of Mustofa's beans is Two Hands Full, a brick-walled cafe in Bandung opened by a 26-year-old barista named Stefan Setiadi.

"At first, we couldn't find any Indonesian coffee," said Setiadi, who was inspired by the coffee culture of Australia and set up his own shop in 2013. "Now, more and more farmers are willing to do whatever they need to improve quality."

He began roasting coffee inside the cafe in 2015 and plans to open a bigger roasting facility nearby this year.

As the Indonesian market develops, cafe owners like Setiadi are likely to face more competition from global players. In September, a unit of Italy's Massimo Zanetti Beverage Group, which runs the Segafredo cafe chain, bought a majority stake in Jakarta distributor Caswell's Indonesia for an undisclosed sum. The group hopes that combining Caswell's long experience of buying single-origin coffee, as well as its Specialty Coffee Association-certified training facility, will create a one-stop shop for clients such as cafes, hotels and restaurants. 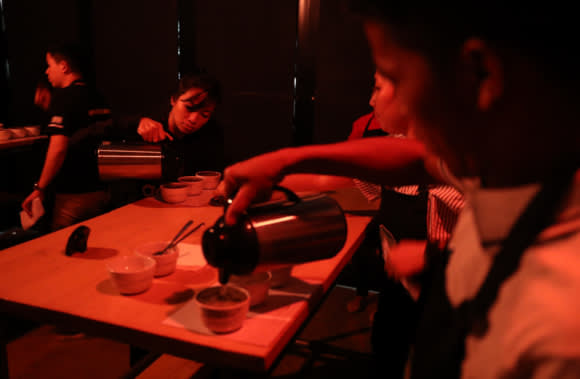 Students attend a cupping class in a darkroom at Caswell's Coffee in Jakarta. (Photo by Shinya Sawai)

Under a similar strategy, Japanese coffee company UCC Ueshima Coffee bought into the Indonesian distributor of Italian coffee brand Illy, as well as its roasting factory, earlier in 2017. UCC is also thinking about bringing over its own cafe chain.

Starbucks, which set up shop in Indonesia in 2002 and now runs about 300 cafes in the country, last year launched several of its high-end Reserve stores, where baristas prepare coffee manually.

There is still a long way to go. Despite the country's coffee heritage, the average Indonesian consumes 0.98kg per year, compared with 4.5kg for Americans and 3.5kg for Japanese. The figure is "growing quickly but still from a small base," said Peter Slack, Caswell's managing director. "It's nowhere in the volumes of Singapore and Australia's 4kg."

Back in the Java highlands, cultivating premium coffee at a low cost is no easy task.

Quality Arabica beans need to be grown at high elevations, generally above 1,000m, to avoid insects and heat. With 17,000 islands and more than 120 active volcanoes, Indonesia "has very favorable conditions for growing good coffee," noted a spokesperson in the beverage raw materials division of Marubeni, one of Japan's largest coffee traders.

Favorable geography is not enough.

Mustofa developed a model in which a process called wet hulling -- which uses water to separate and wash the beans -- is conducted near the plantation to save logistics costs. He also set up a centralized mill for drying and picking. His coffee trees were planted under the shade of taller trees, which block the rain and help enrich the soil.

Over time, Mustofa wants to replicate his model across Indonesia. "We saw regions that have good-quality coffee," he said. "Then we modified [their techniques], because incomes of farmers are low." He already works with 50 partner farmers, which grow beans using his methods and sell the produce to him.

But as demand increases, so too does the pressure to meet targets. The 2017 harvest was around half of the previous year's, at about 30 tons, due to heavy rains. This sent buyers scrambling to secure supplies.

Some powerful international players, meanwhile, are looking to educate farmers in the art of growing Arabica. Nestle, Singaporean commodities trader Olam International and Swiss coffee trader Ecom Agroindustrial are among the backers of the Sustainable Coffee Platform of Indonesia, or SCOPI, a nonprofit group that assists growers.

Last year, the group started holding trade fairs in Jakarta, bringing together coffee farmers from across the country. "One of the biggest challenges for the farmers is having access to the buyers," said Veronica Herlina, SCOPI's executive director. "We want buyers to hear their stories, directly understand where the coffee comes from ... not only enjoying the coffee and taking pictures."

The group, which also produces textbooks on coffee cultivation, aims to train 18,000 Arabica farmers by 2020.

For the moment, good Indonesian coffee is "still hard to find," admitted Setiadi, the Bandung cafe owner, who frequently travels to remote regions in search of the perfect cup.

"We are expecting to see the light at the end of the tunnel in five to 10 years."