In 2013, Tocom established the Japan OTC Exchange with Ginga Energy Japan, the local arm of Singapore's Ginga group. Due to limited clearing services, however, the joint venture for LNG swap transactions had handled only one contract through Tuesday.

Twenty-four companies are now participating in swap transactions in Tokyo. SK LNG Trading, a unit of South Korean conglomerate SK group, is thinking about doing so. The presence of the deep-pocketed CME Group could attract Western oil majors as well.

But competition is heating up. Singapore Exchange in late January set up LNG futures and swap markets. The Singaporean government is actively nurturing the LNG market, with state-owned Pavilion Energy participating in the transactions.

China, too, is looking at launching LNG transactions via the oil and natural gas market in Shanghai. 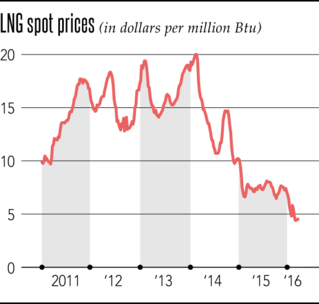 Since 2009, U.S. market data provider Platts has been compiling the Japan Korea Marker -- benchmark LNG spot prices for Japan and South Korea. Turnover of swap transactions using JKM as benchmark in January and February surged ninefold on the year. Argentina and other countries are looking to procure JKM LNG to hedge against price fluctuations.

LNG is mostly traded on long-term contracts linked to crude oil prices. However, the proportion of spot transactions is expected to increase further, and experts say this will stimulate swap deals for hedging purposes. Exports of U.S. LNG with no resale restrictions have begun as well.

A representative of Jera, a fuel procurement joint venture between Japanese utilities Tokyo Electric Power and Chubu Electric Power, said the company is keen to buy LNG based on an Asian price benchmark.

As Asian economies grow, demand for LNG is expected to increase significantly. When it comes to setting the benchmark, Jorge Montepeque of U.K. consultancy Global Markets said that while Japan has a size advantage over Singapore, it needs to pull in traders and other participants.