TOKYO -- Droughts in parts of Asia have been pushing up futures prices for agricultural commodities.

The price of benchmark robusta coffee futures for near-term delivery on the Intercontinental Exchange in London have been climbing steadily since hitting their lowest point in more than five and a half years in late January. A severe lack of rain is expected to reduce the harvest in Vietnam, the main production area. Futures are trading above $1,600 per ton at present.

There are still stocks of the popular beans, used to make instant coffee products, from last year. But some producers are starting to curb shipments in anticipation of a shortage. "If the bad weather continues, the price could hit $2,000," said Nobuaki Abe, representative director of Ecom Japan, a trading company. 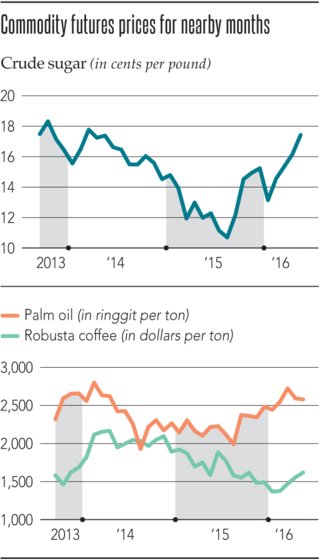 Palm oil prices are also climbing. A dry spell caused by the El Nino weather pattern has hit output in Malaysia and Indonesia, which together produce 90% of the oil. According to the Malaysian Palm Oil Board, production plunged 30% in April compared with the previous year. The nearest delivery palm oil futures on Bursa Malaysia Derivatives have been at two-year highs of around 2,580 ringgit per ton.

A global shortage of sugar is expected to intensify as production in India and Thailand is forecast to fall. The raw sugar futures contract for nearby delivery has hit around 17.5 cents per pound, the highest in nearly two years. As production growth in Brazil, the largest raw sugar producer, has slowed, failing to make up for the decline in Asian production, "the price could rise as high as 18 or 19 cents," an official at a trading company said.

Given the prospect of higher prices, raw sugar is attracting speculative money. According to the U.S. Commodity Futures Trading Commission, large investors such as funds bought a net 250,000 units, almost quadrupling their holdings to a record level in the last three months.