Asian exchanges still lag in gold; Shanghai out to change that

TOKYO -- Asian exchanges, relative newcomers to the gold-trading market, are finding themselves far overshadowed by their powerful and well-established counterparts in London and New York. That said, the gold trade is still brisk in Tokyo, and Shanghai has cooked up plans to rival London as a price-setting giant.

The trading volume for gold is exactly zero at the Singapore Exchange. The exchange entered the gold futures market in autumn 2014 in the hope of tapping growing demand in Asia. But even at the time of the launch, trading was thin. Today, it is nonexistent. 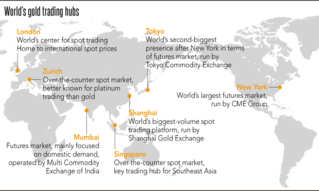 In Singapore, gold trading is active on the over-the-counter market. An official at a Singapore-based financial institution said there is no advantage to using the exchange.

In China, the state-run Shanghai Gold Exchange has launched a spot-trading platform for foreign customers in a bid to internationalize the yuan. Trading volume on the SGE was fairly solid until Shanghai stocks plunged in summer 2015. The market turmoil prompted foreign players to pull their money out. Last July, trading volume stood at slightly more than 8 tons, one-thirtieth the previous month's level.

CME Group began dealing in physically delivered gold futures contracts in Hong Kong in January 2015. In early March, however, only 15 lots (a lot being the minimum trading unit of 1kg) changed hands.

According to Yuichi Ikemizu, branch manager for ICBC Standard Bank in Tokyo, such markets are not needed because existing markets in New York and elsewhere already do a better job. Also, he said, there is an established infrastructure for setting gold prices in New York and having the commodity physically delivered in London, Hong Kong and other places.

One exception to the Asian gold market slump is the Tokyo Commodity Exchange. The trading volume for rolling spot futures contracts, listed in last May by the exchange, has been good. The minimum contract unit of 100 grams has proved attractive to individual investors. "Retail investors account for 70% of the total [trading volume]," said the exchange's president and CEO, Takamichi Hamada, at a press conference on March 10.

Despite lackluster trade, the SGE is not about to give up. The exchange will launch its own gold price benchmark in April. The price will be set daily through an auction process. Because the move will create a reference price, the plan is drawing attention from jewelers and other businesses that handle the metal.

The move is aimed at drawing attention away from London, the current price-setter for gold for other markets. For the endeavor to succeed, however, credible foreign names will need to participate. That is why the Chinese authorities notified foreign institutions in January that their operations in China could be limited unless they participate in the fixing procedure.

Itsuo Toshima, a gold market analyst and independent investment adviser in Tokyo, said Chinese demand for physical gold is huge and that gold prices in Shanghai could very likely become the global standard in the next five years.