The parliamentarians requested the EU to "introduce a single certification scheme for palm oil entering the EU market and phase out the use of vegetable oils that drive deforestation by 2020."

They hope for an EU-wide ban on biodiesel made from palm oil by 2020, claiming that the expansion of palm oil plantations, mostly in Southeast Asia, is causing "massive forest fires, the drying up of rivers, soil erosion, peatland drainage, the pollution of waterways and overall loss of biodiversity."

Indonesia's Environment and Forestry Minister Siti Nurbaya Bakar called the EU proposals an "insult," while the foreign ministry accused the EU of "protectionism" and of ignoring the rights of millions of Indonesian farmers whose main source of income is from small oil palm plots.

The growth in global demand for palm oil, which is used in a wide array of products from cosmetics and fuel to foods such as margarine and chocolate, has resulted in the massive clearing of forests, particularly in Indonesia, over the last 30 years. The slash and burn methods used on Sumatra and Borneo have led to forest and peatland fires that have enveloped Singapore and parts of Malaysia in a smoky haze that has spread as far as southern Thailand.

Images of orphaned baby elephants and orangutans rescued from cleared forests and plantations have spurred vigorous environmental activism and consumer awareness campaigns in recent years. Species such as the Sumatran elephant have been put on endangered lists, with the ensuing bad publicity forcing governments and palm oil companies to sign up for various national and international certification schemes to guarantee that palm oil products are not causing environmental damage.

Mah Siew Keong, the Malaysian plantation industries and commodities minister, said that "Malaysia too already has a national certification system." He noted that "only palm oil is subjected to certification while similarly produced vegetables oils are not subject to sustainability certification," asserting, "this is not fair." With the Indonesia Oil Palm Producers Association executive director Fadhil Hasan calling on the government to "retaliate," mentioning wine, aircraft, perfume and pharmaceuticals as imports from Europe that Jakarta could target, the dispute over palm oil could undermine work started in July 2016 by the EU and Indonesia to move toward a free trade agreement, as well as disrupt longer-standing negotiations between the EU and Malaysia on a similar deal.

Indonesia is Southeast Asian's biggest economy and accounts for almost 40% of the total 620 million population of Southeast Asia. "European companies already provide 1 million jobs here in Indonesia and we hope it can grow," said EU Agriculture Commissioner Phil Hogan, during a Nov. 2016 trade mission visit to Jakarta.With tensions over palm oil threatening to undermine free trade negotiations, some European officials sought to play down some of the concerns raised by MEPs.

Jean-Charles Berthonnet, the French ambassador to Indonesia, described the MEP resolution as "unilaterally critical and moralizing" in an opinion article published in the Jakarta Post, though the ambassador agreed that a better certification system is needed.

"Deforestation is a very complex issue and I think we can agree on a number of points. But we need to take a broader look at deforestation because it is not caused only by the palm oil industry," said Karmenu Vella, the EU commissioner for environment, maritime affairs and fisheries.

Indeed, one recent agreement suggests that the EU and Indonesia can collaborate on preserving forests. In November 2016, Indonesia and the EU launched a licensing scheme that aimed to stop illegally logged timber from being exported from Indonesia -- the world's third biggest jungle area after Brazil and the Democratic Republic of the Congo -- to Europe, and in turn reduce deforestation across the archipelago. "Indonesia has shown true leadership and now sets a high standard for other countries to emulate," said Vincent Guerend, the EU ambassador to Indonesia, when the initiative was launched.

But both sides will now have to come to terms over palm oil. The April 11 meeting of palm oil growers in Jakarta was convened to plan a negotiating strategy ahead of a possible meeting with European officials in May to discuss the proposed restrictions on palm oil.

"We will do whatever we can to convince the European parliament and European countries not to implement it," Darmin Nasution, Indonesia's coordinating minister for economic affairs, told reporters. "We will negotiate in full force," he added.

The European parliamentarians also accused the palm oil companies of not living up to their claims that their products are environmentally friendly. "Some companies trading in palm oil are failing to prove beyond doubt that the palm oil in their supply chain is not linked to deforestation, peatland drainage or environmental pollution, and to demonstrate that it has been produced with full respect for fundamental human rights and adequate social standards," the MEPs stated.

Anita Neville, vice president of corporate communications and sustainability relations at Golden Agri-Resources, a Singapore-based palm oil company that manages 480,000 hectares of Indonesian palm oil plantations, said that producers hoped that the EU would not back away from the use of palm oil. "If your motivation is to tackle deforestation and poverty, you need to stay in the game and demand sustainable palm oil," she said.

Among those most affected by plantation expansion and deforestation in Indonesia is the country's indigenous population, which is seeking more rights over traditional lands in many places that overlap with some of the country's forests and plantations. 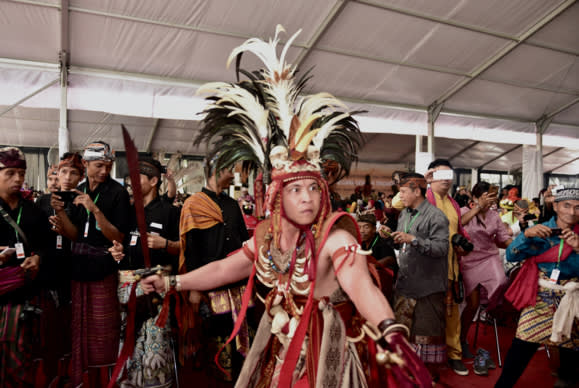 But granting such rights would likely make it more difficult to conduct agribusiness on up 8 million hectares of land claimed by indigenous peoples. This is seen as one reason why Indonesian President Joko Widodo belatedly cancelled a scheduled appearance at a March congress of indigenous leaders in northern Sumatra.

Rukka Sombolinggi, the newly elected head of the Indigenous Peoples Alliance of the Archipelago (AMAN), said she was not surprised at the president's reluctance to attend the event. But she added, "the problem is with the ministry of environment and forestry, they are the ones who are claiming our land as state land."

Her group contends that giving indigenous groups legal rights to their land is the best way to ensure that forest ecologies are preserved. Rukmini P. Toheke, a prominent activist for indigenous peoples from Palu in central Sulawesi, said: "For us the forest is 'katu vua,' or life itself." She added: "If we destroy the forests, we destroy our own lives."