Australia and its volatile future as an LNG superpower SYDNEY -- Australia is expected to overtake Qatar to become the world's largest exporter of liquefied natural gas in 2019, but a political risk has emerged that is casting a dark cloud over the resource-rich nation's future as an LNG export superpower.

Australian oil and gas major Santos has seen its stock price decline as the company is expected to be subjected to the regulations as early as next year.

Australia's conservative ruling coalition, whose approval rating is languished since a narrow election win a year ago, is aiming to allay public discontent with rising electricity and gas bills. But the new energy policy has sparked confusion across corporate Australia.

On April 27, the Turnbull government announced the introduction of the Australian Domestic Gas Security Mechanism, or ADGSM.

According to details released on June 20, the Australian resources minister every summer will discuss plans for the following year's domestic gas supplies by consulting gas companies, industry regulators and other parties.

The resources minister is to then determine by Sept. 1 -- or Nov. 1 at the latest -- whether the country will face a gas shortage the following year. LNG export controls will be imposed in the event of a supply shortage at home.

Three LNG projects in the eastern state of Queensland will be subject to the new regulations for the time being. They are the world's first projects to extract coal bed methane, also known as coal seam gas in Australia, and export the gas in the form of LNG. The three LNG projects, which include the Santos-operated Gladstone LNG, or GLNG, project, went on stream over 2014 and 2015 in anticipation of swelling Asian demand. They have a combined annual production capacity of 25.3 million tons.

The resources minister is to take into account the volume of exports and that of domestic shipments from each project and determine whether each project is denting the domestic supply, including through emergency procurements for export purposes.

If any of the projects is deemed to be harming domestic supplies, the project operator will be required to take measures, such as cutting exports and increasing domestic shipments.

The ADGSM is scheduled to be in force for five years, until 2023.

Prime Minister Turnbull stressed his Australia-first gas policy at a press conference on June 20. "Our first duty," he said, "is to protect our people, our businesses, our households."

Turnbull said it is strange for a nation that is about to become the world's largest LNG exporter to have a gas shortage at home. He also condemned the Australian Labor Party, which was in power until September 2013 for licensing "the export of so much gas without a moment's thought to the impact on the domestic market."

Electricity and gas bills have been going up every year in Australia. In Sydney, typical electricity rates were increased 20% on July 1 -- the start of the fiscal year -- while gas rates were raised 16%.

The Australian Industry Group, which has some 60,000 small and medium-size members, as well as many households are calling for the national government to improve the situation. 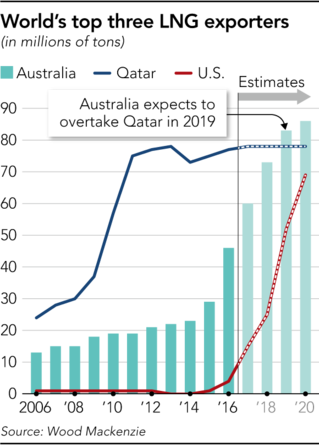 Innes Willox, the Australian Industry Group's chief executive, said that stable supplies of electricity and gas and their appropriate prices form the basis of industries.

Yet Turnbull has drawn criticism from some quarters.

The stock price of Santos, which operates the GLNG project, has plunged about 30% since the beginning of the year. Kevin Gallagher, the company's managing director and chief executive officer, is unhappy.

"Unfortunately, the politics of the situation have now taken over," Gallagher said during a lecture on June 15. "We are being asked to believe that high prices and shortages in supply are the fault of the LNG exporters."

For example, the Santos-operated GLNG project sells all its LNG to South Korea and Malaysia under long-term contracts. If export restrictions are imposed, additional costs will arise due to a failure to fulfill the terms of deals, he said.

Gallagher warned the ADGSM could backfire, that Santos would have to pass on any additional costs to its domestic customers in the form of higher rates.

"GLNG ... will obviously seek an equitable commercial outcome from domestic customers," he said. "Anyone who had made an $18 billion investment in [such] a project would."

Australia's electricity problem came to the fore about a year ago. In September 2016, a massive power outage struck the state of South Australia. Another occurred in February.

Stable electricity supply is a pending issue now that Australia is shifting its power sources from thermal to renewables.

One way to resolve the issue would be to promote the development of gas fields for the domestic market. But as things stand now, objections from environmental protection and other groups are preventing this from happening.

Besides, high power transmission and gas transportation costs are also pushing up electricity and gas bills.

According to Santos, the cost of transporting gas from the Bass Strait in southern Australia to Queensland is higher than exporting it to China by ship.

The Australian Petroleum Production & Exploration Association, which represents the country's energy companies, and the Business Council of Australia, the country's most powerful business lobby, have expressed concerns about the ADGSM.

A government attempt to please the public while destabilizing foreign companies and overseas customers who cannot vote in Australia could put a damper on foreign investment, which the country badly needs if it is to further develop its resource fields.

Australia is expected to become the world's largest LNG exporter in 2019. But if LNG-related investment loses steam, the country could easily lose the top slot to the U.S. or another producer.