SYDNEY -- Australia's mining companies are shelling out more to find copper and other materials used in electric vehicles as demand for the next-generation automobiles grows.

Anglo-Australian mining group BHP Billiton looks to invest $6.9 billion in plants and exploration in the year through June, up 32% from the previous fiscal year's $5.22 billion. The aim is to improve productivity at the company's core coal and iron ore operations, and to develop its copper business. BHP in February completed a $350 million facilities upgrade at the Olympic Dam copper mine, where it plans to raise output 25-35% on the year.

"Growing our copper business [is the] best way of benefiting" from the growing market for electric vehicles in China and elsewhere, CEO Andrew Mackenzie told investors on Tuesday. A single electric car uses around 80kg of copper, according to BHP, four times as much as a gasoline-powered vehicle.

Boosting copper production is already paying off. The metal was selling for $3.20 per pound in the second half of 2017, up 33% from a year earlier. BHP raised output 17% over the same period, largely through increased production at its Escondida mine in Chile. The company's copper operations logged an 83% rise in earnings before interest, taxes, depreciation and amortization. BHP's overall EBITDA increased 14%, helped by the rising price of high-quality iron ore amid China's crackdown on less-productive steelmakers.

Rival Rio Tinto is also raising capital investment, having pulled back following the end of the resources boom that swept Australia earlier this decade. Its capital spending is expected to rise to $5.5 billion in 2018 from $4.48 billion in 2017, with outlays of $6 billion planned for 2019.

As mines turning out high-grade copper dry up around the world, Rio Tinto has expanded its reach, forming a subsidiary to develop and run copper mines in Mongolia and establishing a branch office in Ulaanbaatar, that country's capital, in January. The company has also concluded a memorandum of understanding with the Serbian government regarding the mining of lithium, which is used in electric-vehicle batteries. Healthy copper and iron ore operations helped raise Rio Tinto's net profit 90% to $8.76 billion in 2017. 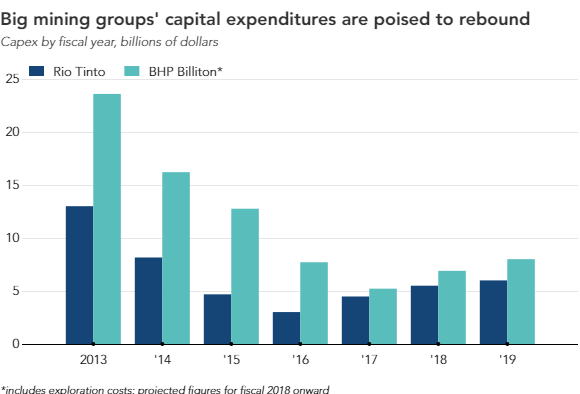 Iron ore miner Fortescue Metals Group is exploring for copper in countries including Ecuador, Colombia and Argentina. The increasingly valuable metal could help offset the impact of falling prices for the relatively low-grade ore Fortescue produces. The company's iron ore fetched $47 per ton in the six months ended in December, compared with $56 a year earlier, knocking net profit down 44% on the year to $681 million.

Yet the longer-term success of these investments depends heavily on the extent to which governments promote electric vehicles. China, for example, recently cut subsidies for many electric and hybrid vehicles by around 30%. India's transport minister revealed on Thursday that the government had scrapped plans for policies to promote electrics. While these countries and many in Europe remain bullish on the technology, it is unclear how much official support electrics automobiles will ultimately receive.