TOKYO -- Aluminum prices are rising over concern of a supply shortage as China, the world's largest producer of the metal, continues to trim excess capacity.

As of the end of April, the benchmark three-month aluminum futures on the London Metal Exchange were around $1,930 per ton, up about 15% from the start of the year. Meanwhile, copper futures fell 9% from their recent highs in mid-February to around $5,600. Zinc futures were down 15% to around $2,500.

In the three months after U.S. President Donald Trump was elected, prices of both copper and zinc jumped 20% due to expectations that rising infrastructure investment, a key promise of the president, would boost demand for nonferrous metals. Copper is used in electrical wiring and zinc for plated sheet steel. However, Trump's policy shift since March has made market watchers skeptical. As expectations have declined, so have nonferrous metal prices.

Unlike other nonferrous metals, aluminum prices remained high because China, which produces more than half of the world's aluminum, had begun to cut output.

The suspension of the projects, which were supposed to supply about 2 million tons of the metal, or about 3% of annual global aluminum production, "was seen by market watchers as a sign that China would cut aluminum production," said a representative of a major trading house.

The reports saw aluminum prices on the LME briefly rise 2% from the previous trading day to $1,940 on April 18.

Many smelters in China are operating below capacity and have had to produce more aluminum than needed domestically, exporting excess supply cheaply and driving down international prices. 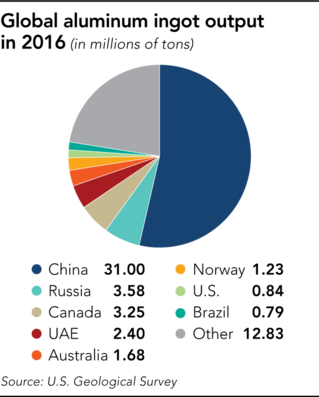 Aluminum smelting also harms the environment, as it requires huge amounts of electricity, much of which comes from air-polluting thermal power plants. To tackle this more than decade-long problem, the government in January announced a 30% production cut in aluminum for Hebei, Shandong, Henan and Shanxi Provinces by the end of November. Beijing previously hinted at cutting production of aluminum, steel and coal at the National People's Congress held in March.

China's excess aluminum capacity has drawn international criticism. In mid-January, the U.S. Trade Representative under then-U.S. President Obama's administration filed a complaint against China with the World Trade Organization, saying that the country's hefty subsidies for aluminum producers was driving down prices.

Wilbur Ross, U.S. Secretary of Commerce under the Trump administration, has also criticized China's subsidies for aluminum producers, helping make it increasingly difficult for China to maintain aluminum production as before.

Exports of aluminum ingots, alloy and products were down 2% on the year at 1.06 million tons in the January-March period, according to data from China's General Administration of Customs.

British research company Wood Mackenzie reckons that most aluminum smelters can turn a profit at $1,700 per ton. Tatsufumi Okoshi, senior economist at Nomura Securities, predicts some smelters could boost output if prices start to rise.