Indonesia and Malaysia fire back at EU in palm oil war The two countries, which account for 82% of global palm oil output, raised the issue of import restrictions with EU President Donald Tusk on Tuesday in Manila, where series of international summits involving the Association of Southeast Asian Nations is taking place.

The European Parliament passed a resolution in April on palm oil and deforestation, aiming to reduce the indiscriminate clearing of rain forests for palm oil plantations. The move is aimed at spurring the creation of a tougher, unified certification scheme for sustainable palm oil and palm products, and banning the use of the commodity in biofuels by 2020.

Indonesia and Malaysia consider the EU measures discriminatory and argue that they have taken steps to promote sustainable practices in the palm oil industry.

"Some attitudes and policies that are detrimental to the economic interest and reputation of palm oil-producing countries must be eliminated," Widodo said.

According to Malaysia's state news agency, Prime Minister Najib Razak will discuss countermeasures with Widodo in a meeting scheduled for Nov. 22 in Kuching, Malaysia. "If we act independently, the impact will not be that effective," Najib was quoted as saying. 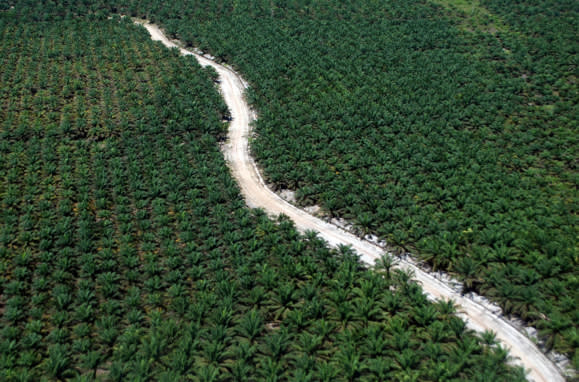 An aerial photo shows a road running through a palm plantation in Dumai, on the island of Sumatra, Indonesia, on Aug. 9, 2016.   © Reuters

EU is a major buyer of palm oil products, accounting for 17% of Indonesia's exports and 13% of Malaysia's, according to the Singapore Institute of International Affairs. The think tank said in a report published in May that by curbing imports, the EU could jeopardize efforts by the industry to achieve sustainability goals, and push both countries to seek more buyers in China and India. While these two Asian markets are also big consumers of palm oil, neither has committed to sourcing the commodity from sustainable sources, the report said. This could undercut the EU's efforts to eliminate deforestation.

Najib had already asked China to import more palm oil from Malaysia during a visit last year. China has responded positively to that request, Huang Huikang, China's outgoing ambassador to Malaysia, told the media in October. That has helped Malaysia's crude palm oil price bounce back to the 2,700 ringgit ($646) per ton range, at present, up from less than 2,000 ringgit in 2015, Huang said.

Malaysia said it would consider retaliatory measures if the EU insists on implementing the resolution. "We can also [impose] similar restrictions against their products," said Mah Siew Keong, the minister in charge of commodities, on Tuesday, without elaborating.

Malaysian oil producers take part in various sustainability certification schemes. One, the Roundtable on Sustainable Palm Oil, based in Kuala Lumpur, includes buyers such as Nestle and Unilever, and Wilmar, a big producer based in Singapore. But the program imposes voluntary ban on forest clearance, according to media reports.