Chinese cuts have led to shortages of raw materials for the metal, such as ferrosilicon TOKYO -- Magnesium prices are rising for Japanese importers. They have shot up over 40% since the beginning of the year, due to higher raw material prices caused by a cut in steel production in China.

Japanese metal importers, such as Nippon Kinzoku, Kurimoto and Kobe Steel, currently pay $2,640 to $2,670 per ton of magnesium, including freight cost. The price hit bottom sometime around late December last year and early January. The pace of price increases has accelerated since the summer. In China, which supplies more than 80% of the world's magnesium, the metal is produced by smelting dolomite, a mineral, and ferrosilicon, an alloy containing iron and other substances. The furnace is heated to high temperatures by gas produced in the process of baking coal to make coke. Both coke and ferrosilicon are also used to make steel.

China has been increasingly shedding excess steel production capacity. This year, two of its major steel companies decided to merge and the government has cut production of coke and ferrosilicon. As a result, the benchmark spot price of coke at the port of Tianjin has risen by 50% since September to around $344 per ton.

Ferrosilicon is also trading higher, at around $1,100 per ton in Asia, an increase of about 40% from a recent low in June. Supplies of ferrosilicon have been tighter since the government launched in June a major crackdown on companies exporting ferrosilicon via a third country to escape taxes. An ongoing industry consolidation in China is also tightening supplies.

In late October, a large explosion occurred in Shaanxi Province, where many magnesium producers are clustered. Speculation grew that magnesium supplies would become unstable. With inventories running low at both producers and alloy makers, the price rose. Some expected it to hit $2,800. Some Japanese alloy makers said they might have to pass on the increased costs to their customers if the price continues to rise.

But it is unclear whether the price trend will continue into 2017 and beyond. Following the price spike, operating rates at some factories are believed to be rising. Many think producers are now replenishing their inventories. As inventories have grown, fears of supply shortages have diminished. 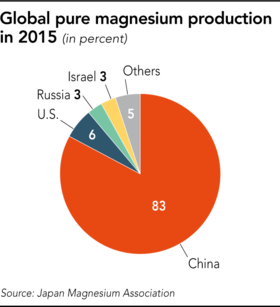 Magnesium prices had been on the decline until last year. Thanks to the rebound this year, Chinese producers are finally making money after struggling with deteriorating profitability. "Most producers want to sell while prices are high, and few are waiting for prices to go higher," said an official at Tak Trading, a Tokyo-based trader. Some pointed out that if the prices of coke and ferrosilicon suddenly plunged, it would put a dent in magnesium prices.

Magnesium is the lightest practical metal. It is just a quarter as heavy as iron and two-thirds as heavy as aluminum. Yet it is strong and rigid. Though heavier than resin, the metal is attracting attention as an alternative for lightening auto parts and construction materials because it is easy to recycle. Global demand for magnesium has grown about 60% in the last decade to 820,000 tons in 2015.