The Philippines has resumed operations of some of its nickel mines, easing fears of global supply shortage.   © Reuters

TOKYO -- The price of nickel, a raw material needed to make stainless steel, has been falling. Two factors are weighing on the price. The Philippines and Indonesia have increased their production of the ore from which nickel is made. In addition, China, the world's largest consumer of stainless steel, is buying less ore, fueling oversupply fears and putting further downward pressure on nickel. 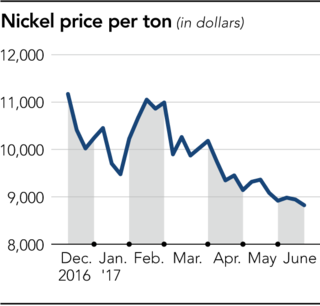 The benchmark three-month nickel futures contract on the London Metal Exchange is currently trading at around $9,000, down over 20% from a recent high hit in February.

Nickel prices had been buoyant until this spring. Hopes for infrastructure spending booms in the U.S. and China had led investors to expect an increase in demand for the metal. Furthermore, in the Philippines, where 20% of the world's nickel production takes place, President Rodrigo Duterte began tightening the screws on nickel mines when he took office in June 2016. In February, he ordered some mines to halt operations, reducing the country's output by around half.

The president was acting on environmental concerns.

The situation had most of the industry believing that the price of nickel would continue moderately rising. The International Nickel Study Group, made up of nickel producing countries and other parties, said in April that the world would face a supply shortage of 40,000 tons this year.

Things changed in May after Regina Lopez, the Philippine Environment and Natural Resources secretary who had been forcing mine shutdowns, was sacked amid an uproar from industry. Successor Roy Cimatu has expressed a willingness to reopen the suspended mines if they meet environmental standards.

Fears of a supply shortage also eased after Indonesia resumed ore exports for the first time in three years. The country had banned the exports in a bid to develop its own smelting industry. The price of nickel fell further.

Then there's China, where demand for stainless steel has been waning. "The [Chinese] economy is not growing as strongly as expected and it seems there is a growing oversupply of stainless steel," said Yuji Tanamachi of IRuniverse, a data provider.

Asian stainless steel prices in June have fallen 20% from May to around $1,900 per ton.

Some Chinese steelmakers have reduced production of stainless and begun making more ordinary steel, demand for which is expected to grow. According to Custeel.com, a Chinese state-owned research outfit, China's stainless crude steel production in May fell about 6% from April to some 1.78 million tons.

In Indonesia, the price of stainless fell due to weaker demand, making some nickel smelters unprofitable and even causing a few to suspend operations. Since most smelters in Indonesia only break even when nickel prices are more than $9,000, more smelters are expected to halt operations, reducing supply.

However, producers and the LME hold excess inventories of the metal. "A small decline in production will not cause a supply shortage," said Takayuki Honma of Sumitomo Corp. Global Research, and the price [of nickel] will likely continue to be top-heavy."

Despite falling prices, nickel producers expect demand to rise in the years ahead.

Yoshiaki Nakazato, chairman of the Japan Mining Industry Association and president of Sumitomo Metal Mining, is among the believers. Their bullishness comes from mounting demand for nickel to make cathode materials for lithium-ion rechargeable batteries (electric vehicle makers are increasingly hungry for these batteries). Demand for nickel for other new uses is also on the rise.

According to estimates by Fuji Keizai, a research company, the global market for rechargeable batteries for next-generation, less-polluting vehicles, including electric cars, is expected to be 6.61 trillion yen ($58.9 billion) in 2025, a fivefold increase from last year.

But not all nickel can be used in rechargeable batteries, so "the price would go up over the medium to long term," a representative of Japanese trader Mitsui & Co. said.